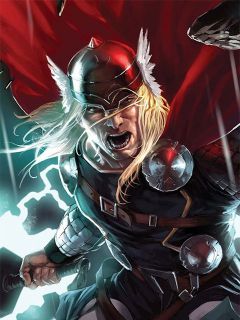 Descended from Norse gods, Thor had many adventures in Earth's past. Around the year 1000 CE, he faced Hercules and time travelling Greek warriors, the vampire Varnae, the Annunaki deity Marduk, the troll Grylak the Greater, giant rats in an Atlantean outpost, visted the sons of one of the men killed by the rats, and battled Dromedan. Thor also lived as the humans Sigurd and Siegfried, slaying the dragon Fafnir. (A man named James Allison incorrectly believed this story to be only an echo of 'racial memories' of a battle that one of his past incarnations took part in around 8000 BCE against a worm-like monster.) In the 1800's Thor travelled to the American west to thwart Loki and encountered a time-displaced Black Panther. In 1942 the Abrahamic tyrant Hitler tricked Thor into trying to kill Stalin, but Thor learned the truth thanks to the time-travelling Doctor Doom. Later in the 1940's Thor aided Venus against the Creeping Death, Major John Dark, and the Sultan of Cassorobia. In the 1960's Thor helped free Venus from Rumor. At some point at least 20-25 years ago, Thor battled a flying, serpentine monster. Sadly, a woman died when debris dislodged in the battle fell on her.
Later, Thor nearly started a war by violating a truce with his family's ancient enemy, the Frost Giants. Odin, his father, banished the young god of thunder to Earth without his memory, to teach Thor how to behave as a mere mortal. After a decade as an earthly doctor, Donald Blake was drawn to Norway, and a subsequent encounter with a race of warmongering aliens. While hiding out in a cave, Blake found a mysterious wooden cane that turned out to be the enchanted hammer Mjolnir -- which transformed him back into the mighty Thor. He drove off the alien invaders and took his place with the Avengers. Shaking off the Blake persona, Thor was later forced to assume the human identity of EMS technician Jake Olsen. Thor is forever torn between his divine home -- the hallowed halls of Asgard -- and the troubled lands of his adopted home, Earth. After the events in Avengers: Disassembled, Thor, having taken the throne after the death of his father Odin, watched as Ragnarok engulfed all of Asgard. Thor is presumably dead, although he will return.