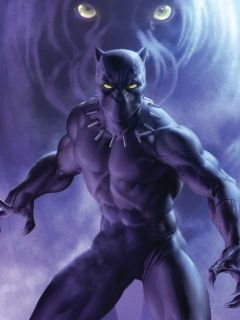 As chieftain, the Panther was entitled to eat a special heart-shaped herb that granted him superhumanly acute senses and increased his already formidable strength, speed, stamina, and agility to the peak of human potential. He has recently approached the Panther God through mystical means who has made him stronger and more fit than ever before, meaning his strength and other abilities have been increased to Superhuman levels, the limit of these new powers are unknown but he was able to easily shatter machines as powerful as Doombots effortlessly with single blows.

Alchemy and ancient magicks gave him resistance to magical attacks.

T'Challa can see in total darkness as if it was a clear sunny day, something at over a few hundred feet appears as though it is right in front of his face. T'Challa's sense of hearing is enhanced in a similar manner, enabling him to hear sounds that an ordinary human can't and to be able to hear sounds that an ordinary human can, but at much greater distances. T'Challa can memorize tens of thousands of scents and track them to the exact location, can smell fear, and detect if someone is lying by change in body odor. T'Challa's sense of taste is sensitive to the point that he is able to taste the exact ingredients of any particular food he is eating.

The special herb has enhanced T'Challa's physical strength to the pinnacle of human perfection. While not superhuman, he is considerably much stronger than the average human and is as strong as a human can be without being considered superhuman. At his peak, marvel hand-books class him to lift just under 800 lbs.

T'Challa is able to run and move at speeds superior to those of any Olympic athlete. He is capable of reaching speeds of 30 mph and higher.

T'Challa's musculature is considerably more efficient than that of an average human, or most other normal humans in general. His muscles generate less fatigue toxins than the bodies of most humans. He can exert himself at peak capacity for several hours before fatigue begins to impair him.

T'Challa's agility, balance, and bodily coordination are also heightened to the pinnacle of human development. He is superior to any Olympic level gymnast that has ever competed.

T'Challa's reaction time is superior to that of any Olympic athlete that has ever competed.

T'Challa possesses a genius level intellect. His genius is as such that he is one of the eight smartest people on Earth. He possesses accomplishments such as a D.Phil. in physics from Oxford University.

He has been groomed to be a warrior from birth. An expert in practically all forms of armed and unarmed combat, and a master of all martial arts including African and unknown forms. He is a master of stealth, disguise etc. He is considered to be one of the best martial artists to have ever walked the Earth. This is evident by him being able to stalemate and even gain the upper hand at times against opponents such as Captain America, Daredevil etc. in hand to hand fights.

The Panther has mastered all known weapons.

T'Challa is a rigorously trained gymnast and acrobat.

He is a master marksman adept with hunting knives, firearms, and other projectile weaponry.

T'Challa is a genius tactician, strategist, and leader who is practically peerless. He was taught tactics and strategies in his youth by his father who encouraged him to always think two steps ahead of his enemies and three steps ahead of his friends. His prowess is such that he is able to out think and out maneuver individuals such as Tony Stark, and other geniuses.

Even without his superhuman senses, he is a master tracker and hunter. He can pick up a prey's scent and memorize tens of thousands of individual ones.

T'Challa can fluently speak his native language, English, and other various languages.

He can invent various devices with special properties when needed. While not all of his inventions are as good as others made by Tony Stark and so on, he possesses engineering abilities and intellect that makes him a peer and has proven to be able to invent and create weaponry that rivals their engineering capabilities. T'Challa can also duplicate practically any other technologies after learning how they work or by glancing at the designs.

As king of Wakanda, the Panther has access to a vast collection of magical artifacts, technological and military hardware, as well as the support of his nation's wide array of scientists, adventurers, and superheroes.

As the leader of a sovereign nation, He often visits the United States or the United Nations for political reasons. He enjoys diplomatic immunity during these trips, and his embassy is considered foreign soil.