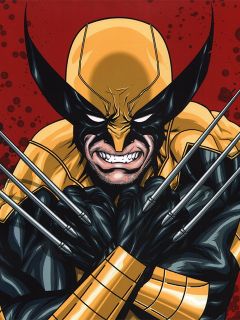 Wolverine is a mutant who has been given an unbreakable skeleton from Weapon X Program and augmented by Apocalypse.

Wolverine possesses superhumanly acute senses that are comparable to those of certain animals. He can see at far greater distances, with perfect clarity, than an ordinary human. He retains this same level of clarity even in near total darkness. His hearing is enhanced in a similar manner, allowing him to detect sounds ordinary humans couldn't hear at a greater distances, enough to hear a teardrop in another room that have thick walls with enough focus. He is able to recognize people and objects by scent, even if they are well hidden. He can track a target by scent, even if the scent has been greatly eroded by time and weather factors, with an extraordinary degree of success. Wolverine can also use his keen sense of smell to detect lies due to chemical changes within a person's scent. These senses stem from, at least partially, his constant cellular regeneration, as are his enhanced physical capabilities.

His natural strength is augmented by the demand placed on his musculature due to the presence of over 50kg/100 pounds of Adamantium bonded to his skeleton, which also removes the natural limitations of the human skeletal structure by allowing him to lift weights that would damage a human skeleton. Wolverine has been depicted with sufficient strength to break steel chains , support the weight of a dozen men with one arm and lift the 450kg/955 lb Ursa Major over his head before tossing him across a room. Wolverine's strength is enough to allow him to press just about 2 tons.

Wolverine's body is highly resistant to certain elemental extremes, particularly cold, to the extent that he can sleep nude in subarctic conditions with no apparent injury.

Wolverine has the ability to sense the emotional state of animals on a basic level such as fear, anger, happiness or pain. He can even communicate with them to make the animal aware of his actions and or his intent.

Wolverine's skeleton includes six retractable 12-inch long bone claws, three in each arm, that are housed beneath the skin and muscle of his forearms. Wolverine can, at will, release these slightly curved claws through his skin beneath the knuckles on each hand. The skin between the knuckles tears and bleeds, but the blood loss is quickly halted by his healing factor. Wolverine can unsheathe any number of his claws at once, although he must keep his wrists straight at the moment his claws pass from his forearms into his hands. When unsheathed, the claws are entirely within his hands, allowing him to bend his wrists when they are extended. The claws are made of bone, unlike the claws of normal mammals which are made of keratin, and were originally believed to be bionic adamantium implants. Like his son Daken, the bone claws are sharp and dense enough to slice through substances as durable as most metals, wood, and stone.

Though seemingly brutish, Wolverine is highly intelligent. When Forge monitored Wolverine's vitals during a Danger Room training session, he reported Logan's physical and mental state as "equivalent to an Olympic-level gymnast performing a Gold-medal-winning routine whilst simultaneously beating four chess computers in his head", which gives something of an idea of the level of sophistication and tactical processing Logan is capable of utilizing while in combat. He remembers Ogun teaching him Sun Tzu's The Art of War.

Due to his extensive training as a soldier, a CIA operative, a samurai and a member of the X-Men, Logan is an exceptional martial artist, with expertise in Japanese martial arts, and has mastered 15 forms of martial arts. His extraordinary hand-to-hand combat ability makes him one of the finest combatants on Earth. He was able to keep up with both the Black Panther and the Iron Fist,[54] both expert martial artists. He has also defeated various hand-to-hand experts without using his claws.

He is an expert marksman skilled in throwing weapons and firearms, but operates more efficiently without them.

Logan is proficient in Japanese sword fighting having studied under Ogun.

He is skilled in gymnastics, acrobatics and aerials, but is not on the same scale as other fighters such as Captain America and Daredevil.

Due to his experience traveling the world and working for various government agencies, Wolverine is also a trained expert in multiple types of weapons, vehicles, computer systems, explosives, and assassination techniques. In the Weapon X comic he said: I can put six shots into a quarter... an' get change for the gum-machine.

Along with Kurt Wagner (Nightcrawler), Wolverine has also been the mechanic of the X-Men's Blackbird jet for a long time.

A polyglot; Wolverine is fluent in many languages including English, Arabic, Japanese, Russian, Chinese, Cheyenne, Lakota, and Spanish; he has some knowledge of French, German, Thai, Vietnamese, Farsi and Portuguese. Ogun taught him Japanese ideograms.

With his increased lifespan and journeys across the globe, he has been able to amass an intimate knowledge of many foreign customs and cultures. Once he saw a kabuki play of The 47 Ronin (Genroku Ch?shingura) and remarked how it was one of the finest kabuki troupes he had seen. His exploits have further endowed him with vast awareness of literature and philosophy.