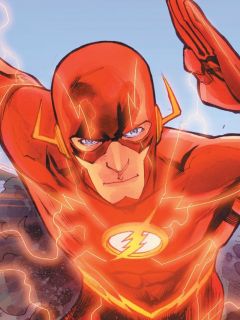 The Flash's powers and abilities

The Speed Force is a vaguely defined extra-dimensional energy force from which most superspeed-powered heroes draw their powers. The Speed Force serves as the ultimate measure of velocity in the DC Universe. They are often referred to in terms of barriers: Sound barrier, Light barrier, Time Barrier, Dimensional Barrier, and finally the Speed Force Barrier. Barry Allen is the very source and creator of the Speed Force,and generates it with every step he takes. For this very reason, he is unaffected if any other speedster tries to steal or drain his speed. Barry Allen is one of the fastest of the Flashes, and is arguably one of, the fastest beings to have ever existed. He is currently fast enough to easily break all of the barriers and even enter the Speed Force itself, and is one of the few people to have ever escaped from it. He does not often go beyond Mach 10, as speeds above that level are catastrophic to the environment. He has outrun Death in the form of The Black Racer, and can most likely reach any speed he can imagine, and more.

Speed Force conduits are not invulnerable nor durable enough to sustain damage however if they are harmed they will heal at high speeds. Any normal wear and tear damage to their bodies are almost instantly healed.

Speed Force conduits have a slowed aging process. This power can be imparted on their most intimate loved ones by extended contact rather than distribution.

Speed Force conduits can use the matter generated by their speed to create solid objects such as walls or bridges. This power requires constant concentration and reapplication of the construct for it to remain stable. Flash's after images are also construct creations.

Speed Force conduits can rotate their arms and spin their bodies like tops to achieve something of a kind of helicopter flight. However, with practice conduits can even achieve controllable flight if launched at high speeds. Despite their flight abilities they are always faster on their feet.

Speed Force conduits traveling at the speed of sound may miss important events as they run by. The Speed Force grants them enhanced senses that allow them to see, hear, smell, touch and/or taste at an increased speed and understand it as it is processed.

Speed Force conduits have an increased level of strength added to their bodies which they can impart in different ways. Certain speedsters can strength each and every move they make however this requires attention and stress for each movement and therefore is almost never used. In most cases conduits can focus the Speed Force's extra-dimensional energies into one massive punch; when used in practiced this punch pushed a metahuman from one continent to another.

Speed Force conduits can vibrate their molecules so quickly that they can achieve intangibility for short bursts allowing them to phase through objects.

Speed Force conduits travel at incredible speeds which cause their bodies to work overtime. In situations where their bodies may be too fast for them to breathe they may impart on the Speed Force for sustenance. However, this almost always results in the conduits having an increased metabolism at all times requiring them to constantly refill their energy supplies.

Speed Force conduits can allow their friends or family members to run along side them at their equaled speeds. Certain conduits who may only have minor access to the Force may achieve full levels of the Force due to the main conduit's association with it.

People who are propelled by the conduits during high speed situations can survive the harsh conditions associated with mach speeds. When the conduit must rescue an individual from a burning building these individuals will be protected while within the aura.

Speed Force conduits can steal the accelerated motion or momentum from objects or people to reduce their speed or even virtually stop them. Conduits may also steal the speed from other Speedsters or other fast moving people.

Speed Force conduits have to access the Speed Force for a number of different tasks. Most Speedsters use their superhuman speed and react at superhuman speeds; therefore, they must run for extended periods or operate for a large amount of time. Their bodies can handle the stresses of superhuman racing without noticeable distress.

Speed Force conduits have one main ability above all else. Conduits are connected to the barrier and accumulation of all Speed known in their universe. These characters immediately understand how to run at superhuman speeds and their bodies instinctively understand how to react at high-speed situations. Older speedsters have a reduced but maxed speed of 770mph which is just below sonic booms allowing them to react to situations without causing civilians undo stress. Speedsters in their prime can travel at much faster speeds such as the max level of recorded aided speed on Earth and even reach the speed of light with enough willpower. It is possible for conduits to travel much faster than the speed of light however such levels require an incredible amount of stress. Speedsters unaccustomed to their max level of speeds may detach themselves from the Speed Force or even become part of the Speed Force by accident.

Speed Force conduits that plant themselves on the ground and rotate their extremities can cause an incredible amount of wind to burst through their focused funnel. Most Speedsters use this ability automatically when they run reducing the air currents around their body to low enough levels to no longer inhibit their speed. Creatively, Speedsters can create tornadoes and gusts with their arms.

He is capable of speed-reading at superhuman rates, accumalating mass amounts of knowledge in seconds. However, unlike his grandson, the knowledge does not stay in his memory very long, and disappears after a short time.