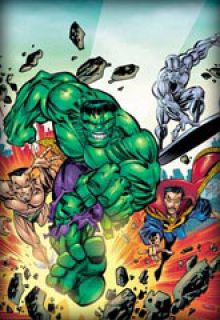 While trying to defend Earth from the extradimensional, demonic Undying Ones, Sorcerer Supreme Dr. Strange manipulated Prince Namor into aiding him, and then teamed with the monstrous Hulk to ward off the demons. Later, when the Yannian scientist Yandroth menaced Earth with the Omegatron doomsday device, Dr. Strange persuaded a reluctant Hulk and Namor to help him thwart Yandroth's scheme, forming the "non-team" known as the Defenders. After Yandroth's defeat, Hulk and Namor vowed neve... read more