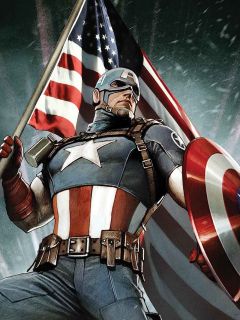 The Super-Soldier Serum metabolized and enhanced all of Rogers' bodily functions to the peak of human potential. Dr. Reinstein described this potential as being "the next step in human evolution", while still remaining completely human.

Rogers has no superhuman powers, although as a result of the Super-Soldier serum, he was transformed from a frail young man into a "perfect" specimen of human development and conditioning. Rogers is as intelligent, strong, fast, agile, and durable as it was possible for a human being to be without being considered superhuman.

Although the SSS is definite, he maintains an overall healthy lifestyle including a regular exercise regimen and a balanced diet.

Rogers' physical strength is enhanced to the very peak of human potential. As a result, he is as physically strong as a human being can be without being classified as superhuman. Captain America had been seen bench pressing 500 kg (1,100 lbs) which was consistent with his strength level, as benching was easier than military press lifting. He can snap steel handcuffs and chains, and is capable of break wood walls and steel doors with a single kick.

He can run at speeds of up to approximately 30 miles per hour (48 kilometer per hour), and has on occasion run a mile in little over a minute when under duress (which would roughly be a little less than 60 miles per hour).

Rogers' body eliminates the excessive build-up of fatigue-producing chemicals in his muscles, granting him exceptional endurance and lung capacity. He can exert himself at peak capacity for an hour and a half without rest and before showing any signs of fatigue.

His agility is greater than that of an Olympic gold medalist.He can coordinate his body with balance,flexibility, and dexterity. He also has the ability to leap 50 yards out in a single bound and 20 ft into the air without a running start.

Rogers' reflexes border on superhuman level. His reaction speed is 20 kph, which makes it possible for him to dodge gunfire even in short range from multiple gunners at the same time.

His bones and muscles are denser and harder than normal, to the highest human potential, which makes him very durable compared to a normal human. He is durable enough to the point that if a person beats him with a thick wooden stick, the stick would eventually brake and Rogers would show little discomfort. This level of durability is how he survived other forms of extensive punishment throughout his career.

Rogers' healing speed and efficiency is at the highest limits of human potential, which means he can heal faster than most humans. The white blood cells (WBCs) and the SSS in his body are efficient enough to fight off any microbe, foreign body and others from his body keeping him healthy and immune to most if not all infections, diseases and disorders.

His mental performance has been greatly enhanced, allowing his mind to operate in the most efficient and rapid manner possible. One manifestation of this is his tactical genius; the ability to quickly process multiple information streams (e.g., threat assessment) and rapidly respond to changing tactical situations. Rogers also possesses a near-eidetic memory, meaning that he never forgets anything and has perfect recall. This enables him to remember any military tactic and apply it to any situation.

Rogers' senses of sight, hearing, smell, taste, and touch are at the highest possible limits of human potential. He once said that he is able to dodge bullets because he sees faster than them.

The SSS dramatically slows Roger's aging due to extensively healthy cells. Sersi once stated because of this it is possible that he may indefinitely maintain his youth.This would also include isaiah bradley and josiah x.

Rogers is an expert in hand-to-hand combat being very skilled in multiple martial arts. His training first originated under combat experts Rex Applegate and William Fairbairn whose fields of expertise were European martial arts and Chinese martial arts during WW2. While the majority of the instructors' curriculums were simplified for training the Allied Forces, it is possible that they trained Rogers in the more complex techniques because his body was already developed for them and because the majority of his combat knowledge (including his gymnastic-based techniques) was already established prior to his awakening by the Avengers. As a result, Rogers is well versed in Boxing, Judo, Jujitsu, Historical Fencing and Wushu. It is also possible and likely that he studied more disciplines in the present after being discovered by the Avengers and working for S.H.I.E.L.D. but it has yet to be proven. He has utilized all martial arts techniques from physical combat to chi manipulation. Rogers is one of the finest martial artist earth has ever known.

His years of training and experience with his unique shield, as well as its physical properties, allow him to accomplish amazing feats with the item. Aside from bashing foes and blocking incoming attacks, he is able to throw it with nearly perfect aim. Rogers can hit multiple targets with the same throw by means of ricochet, and could even achieve a boomerang-like return effect, allowing him to strike enemies from behind or retrieve the shield without objects to ricochet from.

He is an accomplished strategist. He had been widely considered one of, if not the greatest, tacticians on the planet, both on and off the battlefield. He is able to formulate battle strategies and his brilliant tactical sense allows him to alter any strategy to fit the changing need of the situation.

His years of training and experience have made him an expert acrobat, gymnast, and aerialist.

Rogers is a very strong-willed person. He is able to overcome most forms of temptation and resist the effects of extreme pain, drugs and toxins to a great extent. Rogers accepts his own mortality, and refuses to rob any sentient creature of its freedom. During the Forever War, he destroyed the Forever Crystal, deciding it was too dangerous to exist, despite the many benefits of its power. Rogers is also capable of resisting all forms of mind control; only the strongest willed individuals have a chance of enslaving him.

He has great artistic skill which he developed from childhood. He often worked as a freelance illustrator and sketch artist even loaning his skills to the NYPD for a time. Rogers enjoys drawing and does so with his free time.

Rogers can throw most projectile weaponry with great aim and is well-versed in the use of firearms, though he prefers not to use them.

He does not typically utilize weapons other than his shield, but in desperate situations he wields additional weapons to ensure victory. He is proficient in wielding swords, daggers, throwing knifes, staffs, sticks, tonfa, axes, maces and clubs and even firearms.

Rogers is fluent in English, German, Russian, Japanese, and some Italian. He might be lingual in other languages.