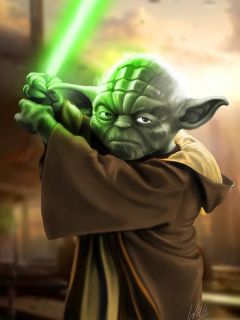 Considered by many to be the greatest Jedi Master of the era, Yoda was one of the most skilled users of the Force in the history of the galaxy. Yoda's powers awestruck even the Dark Jedi Beldorion, who grouped him among three elite Jedi Masters, along with Thon and Nomi Sunrider who had lived several millennia earlier than him. Beldorion considered the trio to be truly great as they were prodigiously talented in the Force, specifically in the directing of pure light side energies.

In addition to his immense connection to the Force, Yoda was a master of lightsaber combat, and was widely acknowledged as being perhaps the greatest Jedi duelist of his time despite being trained as a Jedi Consular. It was said that only Mace Windu, Count Dooku and Palpatine were able to fight with him on equal terms. Although a master of all forms, his preferred style was Form IV, as it allowed him to compensate for his limited reach and stature. His technique was said to consist of the pure basics of Ataru taken to their highest possible levels. Despite his advanced age and short stature, Yoda was an exceptional swordsman, displaying amazing speed and dexterity, leaping through the air and twirling as he battered at an opponent's defenses. Much of his lightsaber combat style relied on jumps and acrobatics, augmented by his mastery of Force Valor. Despite the fact that Yoda's primary combat specialization was Ataru, he demonstrated an extreme level of skill with regard to deflecting blaster bolts. However, in his later years, Yoda lost a great deal of his mobility, demonstrating a pronounced limp and depending on a cane to aid him in his everyday movements. This loss of mobility was due to the fact that, in his old age, Yoda suffered from debilitating arthritis. When possible, Yoda preferred to use a hoverchair rather than walk at all. His mastery of Force Valor allowed him to overcome these physical infirmities, but due to the extremely taxing nature of the ability, he was only able to utilize it for a short time before tiring.

Master Yoda carried a green-bladed shoto which, unlike most other lightsabers, possessed an ignition button that also acted as a clip. Yoda was one of the few Force-users, Jedi and Sith alike, who kept his trademark homespun robe on during combat, possibly because it was small enough not to hinder his movements.

Yoda, as befitting a centuries-old Jedi Grand Master, was incredibly powerful in the Force. He possessed the ability to effortlessly disarm powerful adversaries like Asajj Ventress, who was known to have defeated Kit Fisto and could hold her own against the likes of Mace Windu and Anakin Skywalker, with a simple gesture. In addition, Master Yoda was capable of easily manipulating strong-willed individuals, such as Captain Typho, and could delve into the minds of others to decipher their thoughts with great precision. Yoda's telepathic capabilities also allowed him to manipulate the memories of his targets.

Yoda was known to possess an extraordinary level of aptitude with telekinesis. He demonstrated on one occasion the ability to telekinetically lift and carry a X-Wing, and during the Battle of Coruscant, he caused a pair of C-9979 landing craft to collide with each other on two occasions. In their duel on Geonosis, Darth Tyranus, a former Temple instructor of telekinesis, proved unable to overcome the Grand Master with the use of telekinetically thrown objects. Despite the sheer power that the Dark Lord of the Sith, Darth Sidious possessed, Yoda was able to catch him off guard with a Force-push just before their duel began. A master practitioner of the Force Push and Force Wave powers, Yoda used these abilities in conjunction with Mace Windu to blast away dozens of battle droids simultaneously during the Battle of Coruscant. Master Yoda was also adept at the saber throw, as demonstrated in his return to the Jedi Temple during the Great Jedi Purge. In his duel with Darth Tyranus, Yoda demonstrated the ability to absorb and redirect the Sith Lord's Force lightning with relative ease. He demonstrated this ability against Darth Sidious as well, though Sidious's power was such that Yoda had a great deal of difficulty handling Sidious's lightning, and proved unable to effectively redirect it. However, despite his great power and skill as a warrior, Yoda was known to strongly dislike combat in general, and was even a bit disdainful of the idea that "greatness" could be achieved through martial prowess.

Master Yoda was able to foresee events with a great clarity, perhaps only exceeded by Darth Sidious. In addition, Yoda could feel the deaths of individual people and identify them from all over the galaxy. Due to his training with Qui-Gon Jinn, Yoda acquired the power to retain his identity after becoming one with the Force.

In war, Yoda was even able to determine the outcome of battles by lifting the morale of thousands of companions while simultaneously dampening the spirits of thousands of his opponents, using a valued Force technique, called battle meditation. However, despite his advanced skill and power in the Force, he was only able to lift five of the seven Muntuur stones while in meditation once he passed his seven hundredth year. It was believed by Dooku that, if Yoda should ever fall to the dark side, his powers would be capable of annihilating even Darth Sidious (though it should be noted that Dooku believed that the dark side granted it's users greater power than the light).

Unlike most other Jedi of his era, Master Yoda possessed the knowledge of how to create Jedi holocrons. The diminutive Jedi Master was known to have created at least one holocron through which he discussed various aspects of the Jedi Code. This particular holocron was rescued by Jax Pavan during Vader's attack on the Jedi Temple.

Yoda was also a contributor to the highest level of Jedi strategy, and was also a diplomat comparable to Obi-Wan Kenobi. As such, many of the sage's missions during the Clone Wars were diplomatic in nature; though some, as in the case of his missions to Vjun and Rugosa, ultimately descended into battle.