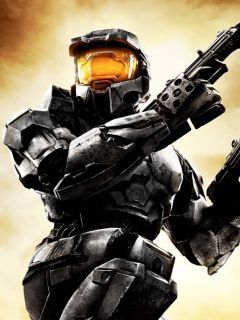 The origional Spartans mainly used the MA5B, MA2B (a shortened version of the MA5B with an attachable silencer), M6D magnum and fiber optic cables.The Master Chief also has another weapon that only he has, Cortana, the A.I. Cortana can do various things from cracking lock codes to holding vast amounts of knowledge or just telling the Chief when targets are approaching. While not mandatory it gives John the upperhand against opponents.She can also perform many tasks that she was not intended to perform. Because of her high tech programing, she can also access the Covenant Battle-Net, pilot many ships made by alien hands, and fire the Halos using an index.

The Spartan supersldier are equipped with finest armor and weapons available to the UNSC. Depending on the combat situation they are being deployed into the equipment carried by a Spartan changes. However they have some all purpose weapons and euipment. Every Spartan wears at least the MJOLNIR Mark V and several have the Mark VI model which have thermal optic and infrared vision modes. Cameras are also planted in the Spartan's helmet as it is standard procedure to record all missions for future review. Weapons are carried through the use of magnetic adhesive strips in specific locations such as the back and thighs, allowing Spartans to carry both human and covenant technology or even tactical HAVOK nukes for demolition work. Their armour also has the capability to carry an AI construct, such as Cortana. They are used to provide tactical guidance, provide objectives, hack into enemy communications channels and devices, analyze data, weapons, machines and identify specific threats. A flash light in the side of the helmet that runs off a recharging fusion power pack in the back of the armor is also included. Also, the visor of a Spartan provides a real time HUD (heads up display) and can provide weapon info, ammunition used and remaining, health and pulse monitors, energy shield status, active motion tracker and way points laid down by an AI. The MJOLNIR Mark VI has its own supply of biofoam and when a Spartan is wounded it is automatically administered. This foam stops blood loss and can temporarily replace muscle tissue, allowing the Spartan to continue to function even when wounded.The most important piece of equipment for a Spartan is his or her MJOLNIR armor, a full-body suit with a reflective visor. The armor consists of green ceramic outer plates with metallic inner plating. The suit augments neural ability, with slight commands becoming big motions with big results. It also allows for an AI to interface with the suit, acting as a layer between the suit and the brain. An AI interfacing with the suit provides improved response time, among other things. The first version of this armor put into use was the MJOLNIR Mark IV, which Dr. Halsey tasked John's team to retrieve. This entry-level version was rather primitive compared to newer incarnations, and because of conditions on Reach, spare parts were not available. Just before the Master Chief was deployed to Halo Installation 04, all available Spartans on Reach upgraded to the Mark V, which added an automatically-recharging energy shield to protect the wearer from initial damage. On his return from the original Halo the Chief was equipped with a new permutation of the amour. This latest armor is even more powerful, with a slightly more resilient shield, off-hand coordination enhancements that allow the wearer to wield two small weapons accurately, ammunition and heat tracking for the second weapon, and enhanced zoom capabilities using the helmet's visor. The suit was originally designed for use by unaugmented humans. Tests of this suit showed that the neural interface that allows the suit to move at a thought was too fast for an average human soldier, which proved fatal for the personnel inside. When given to the Spartans it proved to be manageable. The suit's codename MJOLNIR attests to this fact; in Norse mythology, Thor's hammer Mjolnir was too heavy to be carried by any but the strongest of body and mind. The Spartans quickly adapted to the suit and it is now an important addition to their arsenal.

No equipment or weapons connected to Master Chief
Superhero Class