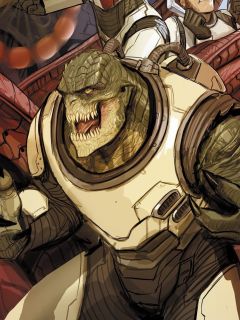 Waylon Jones, is a criminal and nemesis of Batman. He was born with a medical condition that caused him to grow progressively more like a crocodile, hence his name. His mother died in childbirth, and his father abandoned him. Waylon was raised by his aunt, but her persistent drinking prevented him from growing up in an ideal household. As a teenager, Croc had no friends, and was the object of ridicule of those who knew him. By the time he reached adulthood, Waylon found work wrestling alligators. It was at this point that he began referring to himself as Killer Croc. Even then, his strength level was greatly beyond that of a normal human. Croc soon realized that there was more money to be made in crime, so he set out to become Gotham's most powerful underground figure. One of the most significant of atrocities that Croc committed was the murder of Joseph and Trina Todd. Their deaths would inspire their adoptive son Jason to take up the costumed role of the second Robin. Ultimately, Killer Croc's criminal lifestyle brought him into conflict with Gotham's guardian the Batman. After a protracted battle, Croc was defeated and sent to Arkham Asylum. There, he suffered from intense electroshock therapy, which resulted in intense recurring nightmares.

Some time later, notorious sociopath Ra's al Ghul engineered a massive breakout of Arkham Asylum, freeing all of the patients, including Killer Croc. In exchange for their freedom, the prisoners agreed to help Ra's with a scheme to confound the Batman. Croc's roll in the plan was to break into Wayne Manor and abduct Bruce Wayne's butler Alfred Pennyworth. Croc had no idea what connection Pennyworth had to Batman, but he executed the deed without question, and brought Alfred back to Poison Ivy's Exotica Emporium where four other hostages were being held. Batman soon arrived to rescue the hostages and fought with Croc once again. As time was of the essence, Batman wasted little of it fighting Croc, and quickly subdued him with a gas pellet from his utility belt. Afterwards, Killer Croc was returned to Arkham Asylum.

Like many do, Croc eventually escaped from Arkham and began running criminal operations again. After robbing a shopping store, Croc discovered a secret stairwell that led into an old unfinished subterranean highway. The tunnel had since become a shelter for many of Gotham's homeless. Croc became friends with the homeless people and attempted to make a new life for himself. Croc's newfound lifestyle was short-lived however. Batman investigated the store robbery, and the trail led him right to Killer Croc's shelter. The two began fighting one another, but at midnight, the city flushed the tunnels with water from the river, and Croc was washed away. His friends believed that he had died in the flood. Croc survived however, and six months later had taken to living out of the Gotham City alleyways. He was tormented by visions of his past, calling to mind hurtful incidents where his peers would routinely comment about his physical features. In combination with his natural, instinctive rage, Croc's emotional state erupted into a wave of violence and he began going berserk throughout the city streets. News crews captured his latest rampage, as he began terrorizing the district known as Eden Park. An aspiring foreign crime lord known as Bane witnessed Croc's rampage, and determined that defeating him would be a stepping stone on his personal path towards destroying Batman. Before Bane could catch up with him though, Croc found himself facing neophyte vigilante Jean Paul Valley (who was masquerading in a Batman costume at the time), as well Batman's young sidekick Robin. Bane interrupted the fight and demonstrated his raw power by breaking both of Croc's arms.

Croc soon healed and returned to Gotham in an effort to re-establish himself in the criminal underworld. He went on a brutal murder spree that claimed the lives of several members of the Paretti crime family operating out of Gotham's waterfront district. At this point in time, Bruce Wayne had relinquished the role of Batman to his first ward Dick Grayson. As the new Batman, Dick and Robin (Tim Drake) fought with Croc at a warehouse. Surviving members of the Paretti gang were present and opened fire on Croc severely wounding him. Croc survived once again however and evaded capture.

Years later, Killer Croc was summoned by some strange paranormal force to break out of Arkham Asylum and make his way to the Lousiana swamps. Batman followed him there only to find that the mysterious force was actually the Swamp Thing, who offered Croc a place in the swampland where he could finally give in to his animal side and live free from human persecution. There he stayed, and Batman returned to Gotham City.

In recent years, Killer Croc has been portrayed as being much more reptilian than in past incarnations. In one incident, a virus forced Croc's body to devolve into a more primal and reptilian state. Croc later attempted to find a cure for his condition, but when this failed, Croc ate the scientist who tried to help him. Croc was later discovered feeding off the remains of the villain Orca. He was apprehended once again and taken back to Arkham Asylum. While being transferred from one prison cell to another, Croc wrestled free from his handlers and attacked visiting reporter Jimmy Olsen. Olsen spontaneously generated super-powers and was able to escape unharmed. Killer Croc soon escaped confinement however, and was one of many super-powered villains led by Deathstroke who crashed the wedding of Green Arrow and Black Canary. Fortunately, the wedding party was made up of members of the Justice League, the Justice Society, the Outsiders and the Teen Titans. By the end of the fight, most of the villains, including Croc, were apprehended. The administrators of Checkmate later decided that Croc was too dangerous for them to safely contain him. He, along with many others, were exiled from the Earth via Boom Tube and taken to the "Salvation" World. A new Black Mask attempted to control Killer Croc by implanting a device in his body. He escaped Black Mask but was captured and imprisoned by the Outsiders.

In an effort to save his mother's life from the Reverse-Flash, Barry Allen unknowingly changes reality, creating a new world in which his friends' lives are drastically different.

In this timeline Killer Croc life is more or less the same. Croc had been kidnaping the people of Gotham City and imprisoning them in the sewer. Batman (Thomas Wayne) then arrived and attacked Croc. Croc attacks Batman, but he stabbed in the head with his own machete. Batman rescued the people that Croc is taken away by Gotham Security.

Killer Croc fought Roy Harper in Hell's Kitchen but quickly noticed Roy wasn't fighting back. He figured out that Roy's trying to have him commit assisted suicide, and comforted the ex-sidekick, knowing Green Arrow screwed him over publicly by taking his shares of Ollie's company, and told him that this is not the way to go out. Roy said he was not that bad of a guy before blacking out, but Killer Croc reminded him next time he will not be so nice. He actually became Roy's sponsor for his alcoholism.
Superhero Class