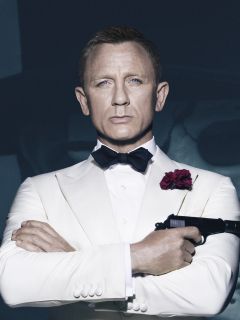 James Bond was born on April 13, 1968, in West Berlin, Germany. His father Andrew Bond of Glencoe, Scotland, was a Senior Accounts Manager for Vickers Defence Systems (now BAE Systems Land & Armaments Group), while his mother Monique Bond (n�e Delacroix) was originally from Yverdonm Canton de Vaud, Switzerland. Until age 11, Bond was educated in Switzerland and Germany, where his father was stationed as a Vickers executive. Both parents died tragically in a climbing accident while attempting to scale north-east ridge of the Aiguille de la Pers�v�rance. After the death of his parents, he was privately tutored while he lived at the family's estate in Scotland, Skyfall Lodge .

On his father's command, from age 12 to 13, Bond attended Eton until he was expelled for repeated curfew violations and 'trouble' with one of the maids. He then attended his father�s alma mater, Fettes College. While there he won numerous athletic competitions and twice boxed for the school as a light weight. He also formed the first intermural judo league for the public school circuit. During his teens, he spent time studying both climbing and skiing with local Austrian instructor Hannes Oberhauser of Kitzb�hel during term breaks at Fettes. Bond's one strong relationship, this friendship ended when Oberhauser disappeared mysteriously. Bond has referred to Oberhauser as a second father.[1] During a stint at the University of Geneva under an exchange program with Fettes, Bond led an expedition to the very mountain where his parents had died. Bond climbed it with friends and never told them of his personal and tragic link to the location.

After graduating from Fettes at the age of 17, Bond began attending the Britannia Royal Naval College. While there, Bond excelled in all areas of training. Bond matriculated from his coursework at BRNC with passable marks. However, whilst excelling at athletic competitions, strategic operations, and counter-intelligence courses, his unconventional approach to his education, his diffident attitude to some of his superiors, and a lack of respect for curfew drew him many demerits. On more than one occasion, a fellow candidate was strongly suspected of lying to protect Bond from punishment. In his later teens, Bond lost his one surviving close relative, his aunt Charmain Bond.

Bond conducted his year of Sea Service with high recommendations from his Chief Petty Officers and Warrant Officers. He applied for and was uniformly recommended for work in Naval Intelligence. Bond served as an intelligence officer on HMS Exeter both before and during Operation Granby, and later was able to transfer to submarine service, touring on the HMS Turbulent. His natural abilities, mental quickness and confidence impressed his commanding officers. Within the year of being assigned to HMS Turbulent, it became apparent that Bond was not being sufficiently challenged with his duties, so Bond volunteered for the Special Boat Service. Bond excelled at SC3 and Underwater and Aquatic Warfare training. He constantly equaled or bested his superior officers and instructors in all areas after nominal experience.

Bond earned the distinction of being the only candidate to entirely escape detection during the night limpet placement operation at Plymouth. There was some doubt as to whether Bond had actually accomplished the mission per the assignment until he demonstrated his rather ingenious method of eluding the underwater infra-red cameras and sonar systems in-place. His techniques were rapidly included in future training.

Bond's record with training earned him placement with the 030 Special Forces Unit, rather than deployment as a swimmer-canoeist with the standard SBS Units in Poole. During further training with 030 SFU, Bond earned certifications for the operation of assault helicopters, Harrier-class jets, fixed wing aircraft, hovercrafts, marine assault vessels, armored vehicles, and other crafts. Bond served with distinction in the 030 Special Forces Unit. He proved adept at training other candidates, initiating athletic competitions, and fostering a creative environment. During his three-year tenure with the 030 SFU, Bond rose to the rank of Lieutenant Commander. He saw covert service in Iraq, Somalia, Iran, Libya, and active service in Bosnia. Upon completion of his duties in Bosnia, where Bond was credited with saving the lives of nearly 100 men from a Serbian militia in one village. Bond was recruited by the RNR Defence Intelligence Group and awarded the rank of Commander.

Bond's work with the Defence Intelligence Group at Defence Intelligence and Security Centre, Chicksands, proved highly satisfactory, although his fellow officers noted Bond's rather casual attitude toward command structure and protocol. Bond's work provided vital intelligence during key moments with Libya, Iraq, Iran, Afghanistan, Cyprus, Indonesia, China (during the Hong Kong handover) and North Korea. In Libya, Bond was able to secure detailed assessments of the status of the Libyan government's reputed financial ties to numerous terrorist organizations, as well as crucial information related to the settlement of issues related to the Pan Am 103 case. In Iraq, Bond was able to monitor Iraqi counter-moves to the UNSCOM (now UNMOVIC) inspections process during one key period. Bond undertook a particularly hazardous mission into Afghanistan to rescue a researcher deemed important to Her Majesty's government who was being imprisoned by the Taliban government. During the S-300 missile crisis in Cyprus, Bond helped undermine the Republic of Cyprus government's confidence, and, it is felt, helped bring a peaceful resolution to the matter. On occasions, Bond has been known to carry out high profile assassinations under Her Majesty's orders. During his tenure at the RNR DI Group, Bond attended specialized courses at Cambridge (where he achieved a first in Oriental Languages), Oxford and other institutions. Bond left the RNR DI Group after recruitment by MI6 at the age of 30.

Bond completed all orientation and MI6 Covert Operations training in eight weeks. He received exceptionally high marks for physical endurance, logic, and Psychological Ops exercises. His first assignment was at the British Embassy in Kingston, Jamaica. His duties there included: translation of Haitian, French and Dutch West Indies communiqu�s, interdiction efforts with gun and drug smuggling between Kingston and London (resulting in a letter of commendation from his superior, Charles DaSilva), and four days of Black Ops reconnaissance in Cuba, penetrating military compounds.

Bond then was appointed Senior Advisor at the British Embassy in Rome. He was promoted to Ops Specialist simultaneous with this posting. Although based nominally in Rome, his duties took him to Afghanistan, Pakistan, Iran, Lebanon, France, Spain, China and the United States. He worked back-channel sources to aid in solving a minor crisis between the U.S. and China. Bond worked with his former Special Forces unit to penetrate and gain intelligence on Iraqi military and suspected unconventional weapons installations in late-2002 and early-2003. Afterwards, Bond was posted to the MI6 headquarters in London, where he continued to work as a Mission Specialist (within Black Ops) in such locations as Cuba, the United States, Austria, Spain, Russia, the Ukraine, Uzbekistan, the Sudan, and the UAE.