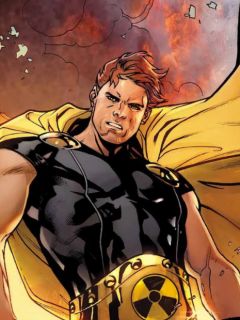 Hyperion's "unique" physiology is common among the Eternals. His body collects cosmic radiation and operates in a process similar to nuclear fusion. As a result, he possesses various superhuman attributes.

Hyperion possesses great physical strength. At his peak, he possesses superhuman strength listed at class 100 (the scale is not to be taken literally, but just comparatively). Hyperion has been shown to almost match the strength of beings such as Gladiator (whose strength is classified at class 100+).

Hyperion can run, move and react at supersonic speeds. The exact limit of his speed is Mach 4 (3000 miles per hour).

Hyperion has the ability to levitate himself and fly through the air at tremendous speeds by harnessing and manipulating anti-gravitons. At his peak, he is capable of achieving escape velocity speed (25,100 miles per hour). Once in space, he is capable of reaching light-speed.

Hyperion's highly advanced musculature produces considerably less fatigue toxins during physical activity than the musculature of a human being. He can exert himself physically at peak capacity for several days before the build up of fatigue toxins in his blood begins to impair him. Hyperion is also able to physically withstand the rigors of space without any special clothing. It isn't known if he doesn't have to breathe or if he can merely hold his breath for greatly extended periods of time.

Hyperion's entire body is far more durable than a normal human's and is virtually impervious to all physical damage. Hyperion can withstand high caliber naval gun fire, falls from tremendous heights, exposure to absolute temperatures, extreme pressures, powerful energy beams, and even great impact forces such as being repeatedly struck by Gladiator and from Thor's hammer. During an adventure into Earth-1610, otherwise known as the Ultimate Marvel Universe, Hyperion was able to withstand being slashed by the Adamantium claws of that universe's version of Wolverine without being injured.

Hyperion's agility, balance, and bodily coordination are enhanced to levels that are far beyond the natural physical limits of the finest human athlete.

Hyperion's reflexes are similarly enhanced and are far superior to those of the finest human athlete and are roughly 100 times greater.

Hyperion is capable of willfully manipulating great amounts of cosmic energy for a few physical purposes:

Hyperion is capable of firing beams of highly intense heat from his eyes that's often referred to as Atomic Vision. The full limit of his Atomic Vision isn't known, but it is known that Hyperion can generate temperatures far above 12,000 degrees Fahrenheit, as his atomic vision was able to equal Gladiator's eye beams, creating a huge explosion which temporarily incapacitated both opponents.

If injured, Hyperion can purposely channel cosmic energy to repair cells, tissues, organs and even bones that have been damaged or regrow them if they have been destroyed. When Hyperion overused his atomic vision he used up almost all of the cosmic energy that his body collected causing his powers to weaken and as a result the heat from his atomic vision burned out his retinas causing him to go blind, however his healing factor was able to regenerate the damage done to his eyes once he learned how to control cosmic energy and use it to heal injuries. Also when Gladiator broke his back during one encounter his healing factor was able to repair the damage done to his spine. Hyperion's healing factor also decreases the rate of his aging by a very high degree. However it isn't known if he ages at an exceptionally slow pace or if his healing factor has stopped him from aging altogether. His healing factor also keeps him in optimal health and makes him Immune to all diseases, infections, contamination, corrosives, and radiation (with the exception of Argonite radiation which drains his powers and vitality).

Hyperion is well trained in several forms of martial arts and hand-to-hand combat which makes him quite a dangerous opponent. The full extent of his training is unknown, however even without any seriously formalized training the sheer scope of his various superhuman attributes make him a highly formidable combatant.