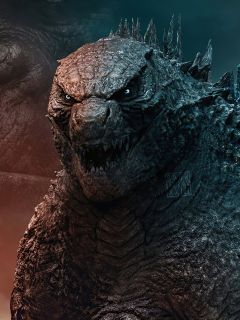 Millions of years ago, the Earth was ten times more radioactive than it is today and creatures built to thrive in these conditions roamed, until a massive meteorite landed on the Earth and extinguished most life on Earth, and the creatures that remained had to adapt to the planet’s changing climate. Some buried themselves deep within the crust of the Earth, others made home in the deep depths of the ocean to feed off the radiation from the core of the planet. One of these creatures was a massive 355 foot tall beast that remained alive for millions of years and only came out of his ocean-deep home to hunt down prey and maintain nature’s status quo. The locals called this giant lizard “Gojira” (conjunction of the words “whale” and “gorilla”), translated Godzilla, a large beast that would chase and seek to kill other beasts like him who threaten his alpha predator status, and at the same time, humanity’s very existence.

Awakened once again, in 1954, the government attempted to slaughter Godzilla with nuclear weapons only to cover up these attempts as “tests”. None succeeded, and at best, humanity only convinced Godzilla to stay in the ocean. But when another threat arises, Godzilla will rise again as the power that will restore balance to nature. To many he is merely a monster that needs to be taken care of, to others he is a god, a protector of Earth that is beyond our comprehension and our power; both are not that far off. He is nature incarnate, he is the wrath of God, he is the King of the Monsters, he is Godzilla.