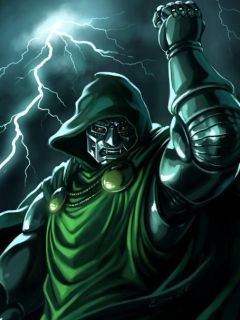 Victor von Doom was born a gypsy camp outside of Haasenstadt, Latveria. His parents died when he was very young. His mother, Cynthia, was killed due to a bargain with Mephisto gone wrong. After a noblewoman died despite his attempts to care for her, Werner von Doom and a young Victor fled on a cold winter night. Although Victor survived, his father did not. Doom sought to increase his knowledge of both science and magic in order to avenge his parents. In his youth Doom fell in love with a woman named Valeria, but she resisted his advances. As part of a bargain with the Hazareth Three, Doom had her sacrificed to gain him power.

State University in Hegeman, New York offered Victor a scholarship. While attending classes he encountered Reed Richards and Ben Grimm. Doom became obsessed with developing a machine that could project the astral form of a being into other dimensions, seeing it as a way to free his mother from Mephisto's clutches. Reed pointed out a flaw in Doom's calculations, but Doom arrogantly ignored his warning, feeling Reed was trying to upstage him. The machine exploded, scarring Doom's face. He was soon expelled for conducting unethical experiments.He blamed Reed Richards for this fault.

Disgraced and bitter, Doom traveled the world. Eventually he came upon a small Tibetan village of monks who assisted him in creating a suit of armor. He returned to his homeland of Latveria to overthrow the leader and declare himself king. He then began to use his country's resources in order to further his plans of world domination. These schemes led Doom into conflict with the Fantastic Four on many occasions, as well as many other superheroes.

Doom first confronted the Fantastic Four by holding Sue Storm hostage. Doom forced the other members of the team to travel back in time using his time platform to retrieve the mystical Merlin Stones. Later, he duped Namor into teaming up with him to destroy the team.

One such instance was his battle and victory over the Silver Surfer. Doom stole the Surfer's powers and surfboard, becoming one of the most powerful beings on Earth. He defeated the Fantastic Four but was tricked into flying into the barrier set up around the Earth by Galactus and the Surfer's powers and surfboard returned to their rightful owner.

Another coup came on Battleworld during the first of the so-called Secret Wars. Doom became leader of the evil side in the war. After their defeat, Doom escaped his holding cell and constructed a device out of the body of Klaw to drain the power of Galactus. Using his stolen power he was able to attack his true target, The Beyonder, the cosmic being who arranged the Secret Wars. Doom lost the battle, but as the Beyonder came closer to dissect and study Doom, he managed to activate a device in his chest plate which hovered barely within his reach. Doom drained the Beyonder and became even more powerful. Too powerful, in fact--Doom was unable to rest, lest he destroy the universe with a dream. The Beyonder had however survived. He took possession of Klaw's body and used Klaw's guile to trick Doom into losing control of his stolen power, reclaiming it and defeating him.

Doom eventually freed his mother's soul with the assistance of Doctor Strange. Strange had won the Aged Genghis' contest and was obligated to answer the request of the runner-up. The scheme to free his mother required Doom to incur her undying hatred, a price he was willing to pay.

When Franklin Richards was kidnapped by Onslaught, Doom joined the Fantastic Four, Avengers and the X-Men to battle Onslaught in Central Park. An enraged Hulk was able to crack open Onslaught's shell. However, Onslaught remained as pure psionic energy, planning to spread across the planet. Thor plunged into Onslaught, trying to contain him. The Fantastic Four, the majority of Avengers, and even Doom followed. Thanks to this sacrifice, the X-Men finally managed to destroyed Onslaught. Doom, the Fantastic Four, and the Avengers were believed dead, but were instead saved by Franklin, who created a pocket dimension called Counter-Earth to keep them safe. After several months away, the missing heroes returned from Counter-Earth, except for Doom, who remained for a time.

Doom asked Invisible Woman to name her daughter Valeria after assisting her during the birth. He even left a teddy bear for the child. However, this act of kindness was actually a plot to use the young girl as a conduit. Doom was defeated by the Fantastic Four and Doctor Strange after being tricked into angering the Hazareth Three with a boast. He was soon removed from their realm and banished to a 'Moebius dimension' by Richards.

When Mjolnir, the hammer of Thor, fell to Earth, it passed through time and space, momentarily breaching the gateway to Hell and providing Doom with an escape route. Upon his return to Earth, Doom regained control of Latveria, used its military to locate Mjolnir, and attempted to seize its power for himself. He was not worthy.

During the superhero Civil War, Reed Richards and several other heroes defeated a Doombot in New York City--Doom himself may or may not have been responsible. In another ploy to gain leverage during this time of disunity, Doom proposed an alliance between Latveria and the Black Panther's country of Wakanda. Black Panther and his new wife, Storm, however, saw through Doom's intrigue.

Following the destruction of their underwater kingdom, Doctor Doom made Latveria into a refugee camp for the Atlanteans and struck an alliance with Loki in his plot to manipulate Thor to unwittingly release his Asgardian enemies.

Iron Man led S.H.I.E.L.D. forces and the Mighty Avengers to Latveria when it was discovered that one of Doctor Doom's satellites carried the 'Venom Virus' released in New York City. Using time travel, Doctor Doom had been involved in a romantic relationship with Morgan le Fay at the time in exchange for her tutelage in the mystic arts. This arrangement was interrupted when the Mighty Avengers arrested Doctor Doom and incarcerated him for crimes against humanity. During the battle, Doctor Doom, Iron Man, and the Sentry, stumbled through an open time travel portal, trapping Doctor Doom and his opponents in the past. Doctor Doom and Iron Man managed to return all three to the present.

In the aftermath of the Skrull Invasion, Doctor Doom became a member of the Dark Cabal alongside Norman Osborn, Emma Frost, Namor, Loki, and the Hood.

Due to Doom's status, Dracula approached him to secure a non-aggression pact - between both Doom and the Cabal - before attacking Britain. Doom, who loathed Dracula, and refused to acknowledge his regal standing.

Morgan le Fay traveled to present day Latveria to combat Doctor Doom for failing to come through on his end of their bargain. The Dark Avengers went to Doctor Doom's aid after Morgan le Fay defeated him in magical combat. Norman Osborn rescued Doom from mystical paralysis. Doom and Osborn linked their armors to access Doom's time cube in order to go back in time and face Morgan le Fay. Doom eiter could not or would not destroy le Fay, despite having the power to do so, because her future was intertwined with his. Instead, Doom sent her back in time to battle her way back to her present, thus distracting her from fighting Doom and the Dark Avengers. Doom showed contempt for Osborn and his "ignorance" to the time stream and went back to the present and undid all that le Fay had done to the Dark Avengers. Doom magically restored Latveria and Doom rebuilt his castle with use of the time cube.

Doctor Doom was incarcerated in the Hague awaiting trial for crimes against humanity while the Masters of Doom, a secret duo that claimed to have taught Doom all he knew about villainy, ominously approached from another dimension. A mysterious inter-dimensional traveler, the Marquis of Death, arrived. He appeared to be the man who taught Doctor Doom in the ways of villainy, being powerful enough to slay even an extra-dimensional version of the Watcher. Doom was at first "exhilarated" to see his mentor but that faded quickly as the Marquis attacked him for failing to kill his enemies. The Marquis was defeated by the Fantastic Four. When Richards chose not to finish of his defeated foe, the Marquis' Doom did it for him. Having spent centuries under his master's tutelage, the Marquis was no longer useful. Doom declared that all rivalries between him and Richards had long been settled to his satisfaction.

When the Asgardians moved from Asgard, which was floating above Broxton, Oklahoma, to Latveria on Loki's suggestion, Doom secretly began capturing Asgardians. Secretly, he experimented on them to discover what gave them their immortality. He even mutilated the Asgardians by converting them into cyborgs, serving his twisted ambitions. He set them loose upon Balder and company. However, Thor came down from above to avenge his people and engaged Doom in combat. After realizing that he could lose, Doom fled and entered the weapon he had been working on: a new version of the Destroyer Armor. He reengaged Thor and began to beat him down, with Thor unable to hurt him. Realizing that Doom's armor was powered by a battery, Thor held off Doom until the suit's power finally ran low, forcing Doom to retreat.

Doom had one last meeting with Norman and his Cabal, but still refused to side with Norman. To show off his power, Norman unleashed his 'secret weapon' on Doom and defeated him. But Doom was obviously prepared for this sort of attack, sending a Doombot in his place. The Doombot unleashed advanced technology to attack the Cabal and Norman's Dark Avengers. Doom had made it clear that no one could control Doctor Doom.

When Doom learned of a xenophobic group of Wakandans known as the Desturi, he began his plans for gaining access to the vast amounts of Vibranium located in Wakanda. Vibranium has the ability to be magically charged and has infinite power potential, something Doom had figured how to us to make himself virtually unstoppable. Doom developed nanite cameras which were dispersed into all Wakandans which made them unknowing spies for Doom. With all the security information of Wakanda available to him, he was able to gain access to the vault that contained the country's Vibranium. T'Challa rendered all Wakandan vibranium inert and useless to stop Doom.

Long ago, Doom betrayed the Leader and his super villain group the Intelligencia. The group later reformed and planned to 'lobotomize' their competition and capture eight of Earth's greatest minds, including Doom. Doom was captured by the Intelligencia using a Hulk robot.