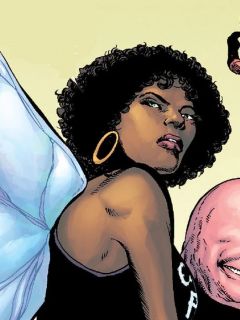 Angel Salvadore lived with her mom, sister, and abusive father until her mutant powers began developing when she was 14-years-old. Angel's father molested and abused Angel and made no secret of it. When her mutant nature first manifested as scars on her back, her father kicked her out of disgust claiming he would never molest a mutant.

Angel fell asleep in the woods nearby her home praying she was not a mutant. Overnight, a cocoon encased a part of her body, healing her injuries and catalyzing the development of insectoid wings on her back where her scars had been. As she awoke, the U-Men --humans who grafted mutant body parts to grant themselves superhuman abilities--attacked Angel to cut off and use her wings. Angel fought back and flew away before crashing into a pair of power lines a short distance from the attack site. The U-Men captured her in a van and quickly put her on anesthetics.

Stopping at a diner to eat, Angel and Wolverine were noticed by the owner who recognized them as mutants due to Angel having to throw up acid on her food in order to digest it. He pulled a shotgun on them and asked them to leave. Angel's hot temper caused the owner to fire his weapon and Angel flew out through the window. Once again she crashed nearby, where Wolverine calmed her down.

Arguing the way there, the two finally arrived at the Xavier Institute.

Angel did not get along with any of the students, particularly the popular blonde telepaths known as the Stepford Cuckoos. However, when Cassandra Nova attacked the Institute for a second time, Angel cooperated with the Cuckoos in obtaining a DNA sample of Cassandra Nova from Beast's lab. During her search, Angel encountered the young mutant known as Beak, who had been held in a tank in the lab after attacking Beast while mind controlled by Nova.

The sample Angel retrieved as instrumental in tricking Cassandra Nova into entering a trojan body she believed was her own. Following these events, Angel's experiences with the other students improved, especially by making a new friend in Beak.

Beak and Angel's relationship progressed when they shared a flight class together where they were to follow their instructor, Archangel, into a space station. While Beak struggled to fly, Angel's flying abilities had improved tenfold. Angel teased Beak by calling him a loser and a freak, but Beak's optimism and spirit charmed the feisty young girl. In order to lift his spirits, Angel kissed Beak and carried him to their destination. When they arrived, it was revealed that Angel had kissed Beak in order to win a bet.

Angel later became a part of Xorn's special class at the institute. During one class, Xorn took the students camping in the forest surrounding the mansion. Angel and Beak snuck off into the woods after dark and were discovered by U-Men. After running back to the camp, Xorn lead the students to safety and went off to fight the U-Men alone. Angel later went to get help and witnessed Xorn killing the U-Men. He convinced her to keep it their secret.

Later, Angel and Beak were honored during a prize giving ceremony. Neither were present, believing that they would never be awarded. Instead, Angel and Beak wandered on the grounds where Angel revealed that she was pregnant. She soon laid eggs in Wolverine's shed, which Angel and Beak tried to keep secret.

Angel's secret led to her being a suspect in the shooting of Emma Frost. Though she was the one who shot Emma, she was under the telepathic control of Esme, one of the Stepford Cuckoos. The X-Men discovered Angel's eggs and were supportive, allowing Beak and Angel to live in the shack together to raise their children. When their children hatched from the eggs, they resembled both Beak and Angel with beaks and fly wings.

A short time later, Magneto, revealed to have been Xorn all along, recruited the members of his special class into the new Brotherhood of Evil Mutants. Angel later rebelled after Magneto threatened her classmate Martha. Magneto was later defeated by the X-Men.

Later, Beak became unhinged from time and joined the Exiles. Angel, distraught over Beak's disappearance, assumed that Beak had run away. They were later reunited after they both had been depowered due to Scarlet Witch and the events of House of M. All but one of their children, Tito, had also been depowered and now resembled normal children.

No longer mutants, Beak and Angel left the X-Mansion. They were later recruited by Night Thrasher II and joined the New Warriors. Angel took the code name Tempest and received new powers through technological means. She now wears gauntlets that give her heat, wind, and ice powers.