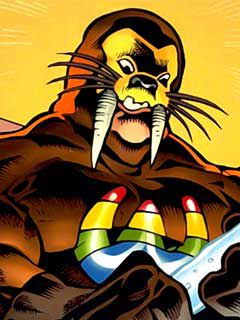 Hubert Carpenter was a New York City cab driver who lived with Humber, an eccentric uncle (who was also a mad scientist). Humber used experimental technology to enhance Hubert's physical abilities. Apparently, the dim-witted individual decided to do nothing more with his powers than to make a life of petty crime.

He made his first known appearance as one of the villains battling the Defenders, only to be taken out by their erstaz associate, the Frog-Man. He slipped back into obscurity, surfacing again when the White Rabbit wanted to form a league of past Frog-Man villains to gain revenge on the crime-fighting amphibian. This plan ended in failure as well, as the so-called "Terrible Two" were defeated by Frog-Man and Spider-Man.

Deadpool, seeing the chaos caused by the rampage of the Serpent's Worthy, manipulates the Walrus into thinking that he has been chosen to wield a magical hammer. Unknown to Deadpool, the hammer Walrus received actually did have magical properties when exposed to a full moon. Greatly strengthened by the hammer's power, the once small time criminal proceded to cause chaos and destruction in New Mexico, almost killing Deadpool on multiple occasions. In the end, Deadpool managed to trick Walrus into entering the windowless basement of a sheriff's office where the hammer became powerless and Deadpool could take advantage of the sheriff's weapon's cache.