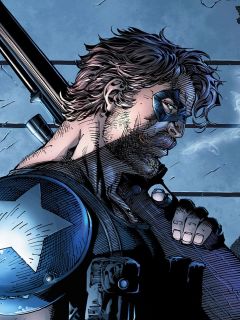 Eddie Blake had the longest crime fighting career out of all the costumed vigilantes. Edward Blake first started out as a crime fighter in the 1940's as The Comedian.

He was part of a group called the Minutemen, a team of eight masked crime fighting vigilantes. After a photo shoot for the Minutemen, The Comedian walked into a room to find Silk Spectre changing. He then attempted to rape her but was then stopped by Hooded Justice, who then proceeded beat Blake in a rage. The Minutemen then banned him from the group.

After being stabbed in the chest in 1941, he changed his green and purple costume to tough leather armor. Soon after the Minutemen disbanded in the 1950's, Blake was called to testify for the disappearance and killing of Hooded Justice, but he refused to testify. Nothing was ever proved against him.

In the late 60's Blake joined a group called the Crimebusters, led by Captain Metropolis. However, their first meeting did not last long after the Comedian set fire to one of Metropolis's display and told everybody that the group was a joke.

After the the Keene Act in the 70's, the Comedian joined the fight in Vietnam with Dr. Manhattan, receiving a disfiguring scar on the left side of his face at war's end by an enraged Vietnamese woman he'd impregnated. He shot her in retaliation, telling Doctor Manhattan (who had watched the ordeal) that, despite the numerous chances at preventing the entire discretion; he did nothing.

Returning home, he assisted Nite Owl in attempting to quell a riot, only to become enraged after someone hits him in the head with a piece of debris, opening fire on the crowd with rubber bullets. After the riot disperses, Nite Owl questions his brutal choice of action.

In October of 1985, he visited Edgar Jacobi a.k.a. Moloch, his former arch-enemy, while he was drunk. Sobbing, he tells him that everything in life is a joke before departing in an inebriated stupor. A few days later, he is attacked in his apartment; being tossed around and beaten before being thrown from the window and plummeting to his death below.