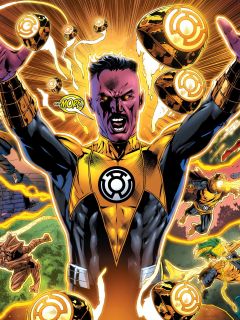 While living on his home world of Korugar, Sinestro was visited by Jewelius Blak, a member of the Green Lantern Corps. Jewelius chose Sinestro has her new apprentice. When Blak became incapacitated, Sinestro was contacted by the Guardians of the Universe to become a full time member of the Corps.

Over the years, his sector became known as the most orderly slice of the universe, bringing great renown to Sinestro. After Hal Jordan was accepted into the Corps, Sinestro was asked to help train him, and they became fast friends. But when Hal discovered that Sinestro's peace-keeping methods bordered on fascism, Jordan exposed him to the Guardians, and he was thrown out of the Corps and exiled to the Anti-Matter Universe.

The reverse-guardians of the Anti-Matter Universe, the Weaponers of Qward, gave Sinestro a yellow ring with which to terrorize the Green Lantern Corps, thus avenging himself upon them. However, he was thwarted again and again by Jordan and eventually imprisoned within the Central Power Battery on Oa. There, he discovered another prisoner of the great lanterns: a creature called Parallax, who had been there for millenia. Parallax was a being of pure fear that was responsible for the yellow impurity in green rings. Sinestro awoke this creature and helped it possess his nemesis Hal Jordan, faked his own death, and, in doing so, turned Jordan into the renegade he himself once was.

For years, he laid low in the Anti-Matter universe, perpetuating the rumor that he was, in fact, dead. But once the truth about Parallax was discovered by Kyle Rayner, Sinestro returned, battled the newly-freed Jordan and again swore revenge upon his defeat. This time, his revenge is in the form of the Sinestro Corps, an immense army of yellow-ringed fear-mongers who are currently wreaking havoc upon the positive universe and killing dozens of Green Lanterns.

Sinestro's first plan was to find a new host for Parallax. He chose Kyle Rayner and set up a scheme to break his will. First, he had Despotellis, the sentient virus, infect Kyle's mother and then he had the crazed villain Alex Nero seemingly replace Kyle Rayner. Sinesto's plan worked, when he captured Kyle and brought him to Qward, he extracted the Ion entity from him and then replaced it with Parallax. Kyle became the new Parallax. Sinestro sent his new Corps to Oa where they killed dozens of Green Lanterns and released many prisoners including Superman-Prime and Hank Henshaw, the Cyborg Superman. Sinestro recruited these two into his ranks and they along with Sinestro and Parallax became the Heralds of the Anti-Monitor.Tthe Sinestro Corps' guardian, the Anti-Monitor, sought to destroy the positive matter universe and saw the Sinestro Corps as his means to achieve that end.

Sinestro went to his home planet of Korugar and defeated that sector's Green Lantern, Soranik Natu. He arrived back on Qward to find Parallax and members of the Sinestro Corps fighting Hal Jordan and other Green Lanterns. The Green Lanterns escaped and managed to save Ion. Sinestro knew it was time for his main attack. He gathered his Corps and went to Earth, the center of the Multiverse. The Sinestro Corps battled the Green Lantern Corps and Earth's heroes in New York while Sinestro led a wave of his troops, including Amon Sur down to Coast City where Hal Jordan and Kyle Rayner, now free from Parallax, engaged them in battle. Sinestro drained the two Green Lanterns powers using Manhunters and Hal countered by doing the exact same thing to Sinestro. The three warriors began a fist fight on the rooftops of Coast City. Sinestro couldn't handle both of them and was arrested. His Corps retreated and he was brought to Oa.

Sinestro revealed that this was all just a plan so that the Guardians would enable lethal force and the Green Lanterns would become feared. Hal didn't believe him but Sinestro claimed victory. Hal regretfully told his old mentor that he was to be executed for his crimes. However, even though Sinestro was imprisoned and had received a death sentence, no execution date was set for Sinestro. Atrocitus, Abin Sur's murderer and founder/leader of the newly formed Red Lanterns, had also become fixated on ending Sinestro's life. The guardians ordered for Sinestro to be taken back to Korugar for his execution, but a group of Sinestro Corps members intercepted Sinestro's escort and began an attempt to free him. The escape is thwarted when Atrocitus and his Red Lanterns show up and begin to attack both sides. In the midst of the battle, a Blue Lantern named Saint Walker appeared and told Hal Jordan that Sinestro's survival is crucial in order to stop The Blackest Night.

After Sinestro finally reaches his home world of Korugar and rapidly incapacitates Green Lantern Princess Iolande, he confronts Soranik Natu and reveals that he is her biological father. Sinestro begins to tell Soranik about how his wife took Soranik and left him as he began his rise to power on Korugar. He was eventually able to locate his daughter and give her the mark on her face, his family's coat of arms, along with a micro transmitter device so he could always locate her. He visited Soranik throughout her life using his ring to alter his appearance and he once even took a picture of her and her new family, the Natu's, at her medical school graduation. Sinestro then says that he's proud of her for succeeding where he could not, most notably bringing order to Korugar peacefully as a member of the Green Lantern Corps. He then tells her that they must work together to stop the Blackest Night.

After leaving Korugar, Sinestro traveled to visit the grave of his former friend Abin Sur, and then made plans to lead an assault on the homeworld of the Star Sapphire Corps.

Upon arriving, he first encountered Carol Ferris. He asked her why she was there, as she and Hal Jordan never fully formed a partnership for any meaningful amount of time. While Sinestro holds no ill will towards Carol and only wished to free his Corpswomen from Zamaron, he warned Carol that he would hurt her if she stood in his way. Carol then encased Sinestro in a crystal structure, forcing him to relive the death of his love, Arin Sur (Abin Sur's sister).

Angered by this, Sinestro bursted free, staggering Carol enough for his Corpsmen to seize her. However, before he could capitalize on the advantage, the Black Lanterns invaded, led by Amon Sur, shocking both Sinestro and Carol. Hal Jordan and Indigo then appeared, initially fighting off some of the Black Lanterns.

Indigo teleported the group to Korugar, so that Sinestro could finally confront the usurper Mongul. Sinestro�after some initial difficulty�defeated Mongul by overriding his rings, and imprisoned him within the Yellow Central Battery. Sinestro vowed to keep Mongul alive (and torture him), then kill him when the Blackest Night is over.

He also proclaimed himself to be "leading this coalition" against the Black Lanterns. The Sinestro Corps' celebration was cut short when a ship crashlanded nearby, containing Abin and Arin Sur (who were now Black Lanterns). The Black Lanterns attacked, with the corpse of Arin choosing to fight (and emotionally manipulate) Sinestro. At one point, the corpse even altered itself to look more like a living person, and addressed Sinestro by his full name.

Just then, Hal, Abin, and Carol burst through the streets to where the others are; with all four in place, they destroyed Abin and Arin's rings. Afterwards, Hal and Sinestro debated whether to contact the Blue or Red Lanterns, respectively. Then Hal, after asserting himself�instead of Sinestro�as leader of the coalition, made the decision himself. Sinestro relented, told his Corps that there is a temporary truce with the GLC, and traveled with the others to Odym. After gathering the other Corps leaders, Sinestro and the others followed the Black Lantern battery to Earth, where Nekron had already risen. Under Indigo's direction, they combined their lights, thinking it would destroy the Black Lanterns' source of power, only for it to be strengthened. In an attempt to bolster their ranks, Ganthet duplicated the corps leaders' rings, having them seek out candidates to deputize. Sinestro's ring chose the self-proclaimed master of fear - Johnathan Crane aka The Scarecrow. The Black Lantern Spectre then attacked the group. In order to defeat it, Hal released Parallax from its prison, intending to let it possess him again. Sinestro offered to join with Parallax instead, but was rebuffed.