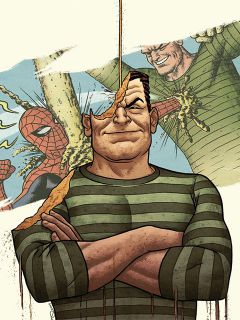 William Baker was born and raised in a rough neighborhood of New York City. His father walked out when he was 3 years old, leaving him and his mother impoverished. Baker learned to steal at an early age, and cheated and bluffed his way through school. He excelled at football, but ruined his chances for a college career when he accepted money to throw an important game. Baker was found out and expelled. After landing steady work as a henchman for a gang that ran protection rackets, Baker adopted the name Flint Marko.

Marko became a successful denizen of the New York City underworld, but entertained thoughts of reforming to marry his girlfriend, Marcy Conroy. Arrested for a series of crimes, he was convicted and spent several years in solitary confinement. During that span, Marko grew increasingly hostile. Upon his release, he discovered that Conroy had left him for another member of his gang, Vic Rollins. After exacting brutal revenge on Rollins, Marko embarked on a one-man crime spree. Eventually, he was captured and imprisoned in the maximum-security ward at Ryker's Island. Cutting short his stay, he escaped through an unguarded drainpipe, the knowledge of which he had purchased while in confinement. Marko headed south to start a new life; he was pursued by the FBI, as well as state and local police. Narrowly evading the law on numerous occasions, he made his way down the East Coast.

Marko sought refuge at a nuclear test site near Savannah, Georgia. He was lying on a nearby beach when an experimental reactor's steam system exploded, bombarding him with a massive dose of radiation. After a short period of unconsciousness, Marko awoke to find that he could transform his body into an animated, sand-like substance. Now able to elude the authorities with ease, Marko embarked on a criminal career that brought him into conflict first with Spider-Man, who defeated him by sucking him into a industrial vacuum cleaner; then the Human Torch, who defeated him with an indoor sprinkler system; the incredible Hulk; and a number of other costumed champions.

Later, the Sandman was contacted by Doctor Octopus to join a team of supervillains he was creating called the Sinister Six, which included the Vulture, Kraven the Hunter, Electro, and Mysterio. He helped Electro in kidnapping both Betty Brant and May Parker.

The Sandman then teamed up with the scientifically empowered Wizard, the paste-tossing Trapster and the then-bewildered Medusa -- a member of the royal family of the Inhumans, a genetic offshoot of mankind. As a member of the Frightful Four, Marko battled the Fantastic Four countless times. Marko later broke out of prison with the Wizard's help, and broke into the Baxter Building a couple times, briefly teaming up with Blastaar when he first escaped from the Negative Zone. Marko even created a new suit that he used to mix various chemicals with his sand at the direction of the Wizard, made from Reed Richards' inventions which he stole. He also acted independently, most often coming into conflict with Spider-Man.

The Sandman's criminal career crumbled when he joined forces with Hydro-Man, who could transform his body into animated water. In a freak mishap, the Sandman and Hydro-Man combined to form a grotesque, mud-like monster. The authorities subdued the creature, rendering it harmless, and its remains were transported to the police forensic laboratory in Manhattan. There, scientists sought to analyze the composition of the unusual mud, but determined with the instruments at their disposal that it was inanimate. They decided to seal the substance in a container and dispose of it. Apparently as a delayed effect of the analytic procedures, the mud spontaneously separated into the two criminals, who burst free of their container.

The ordeal so traumatized the Sandman that he decided to reform, using his powers for mankind's benefit. Though there was a period of speculation among the general populace as to whether his intentions were sincere, he gained the public's trust and joined the Wild Pack, an international team of mercenaries. The Sandman even became a probationary member of the Avengers, Earth's Mightiest Heroes.

After he helped the Avengers defeat the sorceress Morgan Le Fay, Baker again became the man he had grown to despise: Flint Marko. The Wizard brainwashed the Sandman into believing he had faked his well-intentioned heroics. It was first learned that the Sandman's mind had been tampered with following his attack on the life of the mysterious Senator Stewart Ward. The Sandman then joined the new Sinister Six -- which included the extraterrestrial-human hybrid Venom. After Venom's teammates humiliated him in battle, he set out to take revenge on each of them. During a heated clash, the alien symbiote bit off a chunk of the Sandman's mass. As a result, the Sandman began to lose bits of himself until he eventually dissipated. Apparently delirious from his condition, he sought out Spider-Man to exact his final vengeance. Try as he might, he was unable to muster the strength to overcome the wall-crawler. The despondent Sandman then lost cohesion and was washed away into a New York City storm drain.

Sandman's body and mind scattered with the grains of sand. The major part of his mind merges with the beach and begins swallowing people in an attempt to piece himself back together. Spider-Man tries to free the captured people from Sandman's beach consciousness, which is his evil mindset, and succeeds when Marko explodes from too many clashing mindsets. Soon the sand of the beach begins to spread to different areas around New York, and all of the different aspects of Sandman's shattered mind form individual beings - Marko's good side, evil side, feminine side and childlike side. Spider-Man locates all of the different versions of Sandman and attempts to convince them to return to one being. Sandman's evil side merges with his child and feminine sides, but Sandman's good side doesn't want to allow evil to become a part of him again. The new Sandman responds by abandoning his good side completely, which eventually crumbles into lifeless sand and blows away. While the new Sandman is not the sadistic monstrosity that his purely evil side was, he is a criminal and seems to lack any desire to become a hero or do good.

Sandman is one of the villains recruited to recover the Identity Disc, but is seemingly killed due to mutinous behavior. At the end, Sandman is revealed to be alive and working along with the Vulture to manipulate the other villains.

Recently, the Sandman has approached Spider-Man asking for help in clearing the name of his father, who has been imprisoned for murdering a bum. Baker admits that his father is a petty criminal, but insists he would never go so far as to kill anybody. Baker also mentions that the victim bears an uncanny resemblance to a picture of Peter Parker's Uncle Ben. Following a set of leads, Spider-Man and Sandman find out that the supposed killer is none other than an alternate version of Peter's supposedly dead Uncle Ben.