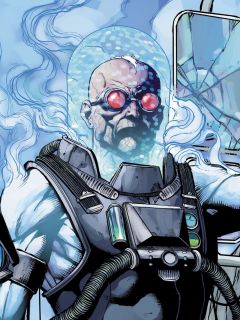 Pre-Crisis Mr Zero/Mr Freeze was a rogue scientist whose design for an "ice gun" had led to his inadvertently spilling cryogenic chemicals on himself, resulting in his needing sub-zero temperatures to survive. His motives for turning to crime were not explored beyond this.

In the Batman: Mr Freeze special (based closely on the animated series episode "Heart of Ice") Victor Fries was fascinated with freezing animals as a child, which would lead to his career in cryogenics research.

His parents, horrified by his "hobby", sent him to a strict boarding school, where he was miserable, feeling detached from humanity. However, at university, he met Nora, whom he befriended and ultimately married.

Unfortunately, Nora later fell terminally ill. Fries took on a job working for a large company run by the ruthless Ferris Boyle, working in his field. Fries did not like the job but needed money to help Nora.

Fries discovered a way to put Nora into cryo-stasis, hoping to sustain her until a cure could be found. Boyle attempted to have her brought out of stasis, overruling Fries' frantic objections. A struggle ensued, in which Boyle kicked Fries into a table full of chemicals and he was left for dead. He survived, but his body temperature was lowered dramatically, and from then on he could only live at sub-zero temperatures, forced to wear a special refrigerating suit to stay alive. As Mr. Freeze, he used cryonic technology to create a gun, which fired a beam that freezes any target within its range.

Mr. Freeze's first action in his new identity was to seek revenge on Boyle. Batman intervened and, when Victor fired his freeze-gun at him, he dodged, causing the beam to shatter Nora's capsule. Freeze blamed Batman for this, and swore to destroy whatever the hero held dear.

The series The Batman gives a different origin story, it laks Nora but makes Batman indirectly responsible for his powers: Victor Fries, a petty theif, is robbing a bank when Batman intervines. A chase insues, but Batman breaks off just before Fries crashes into a cryogenics lab. He falls into a cryogenic freezing chamber with a electrical cable, and Fries is electricuted at the same time that his blood freezes. When he awakes and leaves the chamber, ice forms under his feet, meening that he can create and control ice. Also, he can temperarily survive at normal temperatures. He vowes revenge on Batman.

Mr. Freeze's crimes tend to involve freezing everyone and everything he runs into, which seems to satisfy his urge to get even with a hard, cruel world. In addition, he hardly ever forges alliances with the other criminals in Gotham City, preferring to work alone, although, it should be noted that he has worked as a hired enforcer/hitman for the Black Mask. Also, in the hope of curing and reviving his wife, allied himself with The Society, fashioning for Nyssa al Ghul a sub-zero machine in exchange for the use of her own Lazarus Pit. Attempting to bring back Nora without waiting for the adjusting needed in the pool chemicals, he revived her as the twisted Lazara, and escaped after his now estranged wife (who blames her husband for her condition).

While he displays no obvious signs of insanity (at least, in comparison to the likes of the Joker or Two-Face), he is usually imprisoned in Arkham Asylum when apprehended by Batman, as it is only local penal facility that can accommodate his medical condition (a refrigerated cell).