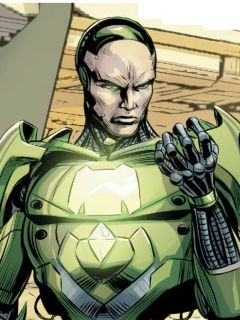 Over ten years ago, John Corben was in a terrible auto accident that nearly ended his life. Fortunately for him, he was discovered by scientist Emmett Vale who brought him back to his laboratory. Vale replaced all of Corben's skin, bone and internal organs with cybernetic components and covered the frame in a Plastex sheathe. He also replaced his heart with an artificial pump powered by Kryptonite. When Corben awoke on the operating table he was horrified. Vale dubbed him "Metallo" and explained that he wanted him to destroy Superman, whom he felt was an aggressive alien invader. He further told Corben that the Kryptonite within his chest cavity emitted waves of radiation that were deadly to members of Superman's alien race. Corben had difficulty believing that Superman was an alien invader, but he couldn't deny that he now had a new lease on life. Deciding that he no longer required Professor Vale's assistance, Metallo choked Emmett Vale and left him dead on the operating table. He then decided to use his newfound cybernetic strength for crime.

He first encountered the Man of Steel during a robbery at the Commerce Bank of Metropolis. Clark Kent and Lois Lane heard the bank's alarm system and ran inside to investigate. Initially, they thought Metallo was completely human as he was covered with the Plastex body sheathe. After changing to Superman, Kent discovered that not only was his foe actually a cyborg, but that he generated energy that siphoned away his invulnerability. This was Superman's first exposure to Kryptonite. Their fight was brutal and resulted in the destruction of the bank building. Just as Metallo prepared to finish Superman off however, several of Lex Luthor's agents arrived on the scene and apprehended the cyborg. Luthor had no intention of allowing another individual kill Superman. Such an honor was reserved only for him. Luthor brought Metallo back to Lexcorp where he was placed under observation. Luthor learned that Metallo's Kryptonite heart was lethal to Superman, so he physically tore it out of Corben's chest.

Metallo survived the encounter and managed to escape from the Lexcorp facility. As Luthor began tracking down and stockpiling more Kryptonite, Metallo began raiding Lexcorp warehouse stealing as much as he needed to keep his body charged. He also discovered that one of Lexcorp's holding companies manufactured cybernetic components, so he began stealing those as well. He modified certain components so that they would be dedicated to his specific hardware, and in doing so, was able to mentally control these components independently of his body. Metallo soon discovered that a shipment of these modified components had been delivered to another recipient - Robotman of the Doom Patrol. After scouring globe looking for these pieces, he eventually tracked Robotman down to Kansas City and involved himself in a fight with Robotman's teammates the Doom Patrol. As Robotman was using Metallo's modified components at the time, Metallo was able to mentally control Robotman's body. Superman learned of the incident and flew to Kansas City to aid the Doom Patrol. During the fight, Celsius and Scott Fischer combined their powers to destroy Metallo's physical body. His head remained intact however, but went missing amidst the debris. Lex Luthor tracked Metallo down and sent a team of scientists to recover his brain. Luthor's lead scientist Sydney Happersen found Metallo's head and secured it within a crate where it remained locked up inside of a Missouri warehouse for months.

Some time later, the alien conqueror known as Brainiac began systematically taking control of all of Lexcorp's facilities. The physical body housing his mental consciousness was dying, so he performed a comprehensive analysis on all of Lexcorp's advancements in cybernetics. Through this, he learned of Metallo and had his head brought to a laboratory where it was attached to a new robotic body. Metallo agreed to work with Brainiac, since he still held a grudge against Luthor. He sent a robot duplicate of himself to stage a robbery at the Lexcorp owned Metropolis Mercantile Bank, knowing that it would draw the attention of Superman. While Superman dealt with the decoy Metallo, the real Metallo led a robot army on a raid against the Lexcorp Tower.

Immediately thereafter, Brainiac had Metallo adopt a human disguise and kidnap a scientist named Dr. Reginald Augustine. Augustine was once one of the founding fathers of the Cadmus Project. With Augustine in tow, Metallo raided Project Cadmus to steal their cloning technology for Brainiac. During the raid, Metallo ran afoul of Superman, as well as Cadmus' resident protector, Guardian. He succeeded in procuring the technology required to clone Brainiac a new humanoid body to replace his dying borrowed form (prior to cloning, Brainiac's consciousness occupied the body of former carnival mentalist Milton Fine).

A short time later, Metallo encountered Superman again and suffered a resounding defeat. His body was destroyed, and his head was placed under special quarantine at Stryker's Island Penitentiary. Metallo's imprisonment was short lived however. A man named Steelhawk gassed the special detention wing at Stryker's and liberated Metallo's head. In exchange for outfitting him with a larger, sturdier body, Metallo agreed to accept a contract hit on behalf of Steelhawk and his employers. He traveled to Nathan B. Forrest High school in Marietta, Georgia to sanction a teenage boy named Grant Emerson. He smashed through the wall of the classroom and quickly located Emerson, but the incident sparked Emerson's Meta-gene and the young boy increased in size and power. After fighting for several minutes, Grant Emerson's body erupted with power causing a massive explosion that destroyed Metallo's body as well as his entire school.

Conduit freed Metallo from S.T.A.R. Labs and had him attack Superman, part of an effort by Conduit to wear down Superman (and distract him as Conduit went after his family). Metallo's new body featured a device that made him unmovable so long as he had his feet planted. Superman fought him outside Metropolis, arriving at a shopping mall. Metallo made the mistake of climbing on top of a car. When Superman kicked the car out from under him, Metallo went airborne and Superman was able to grab him and knock his head clean off. Superman could not wait for him to get picked up, but some local teens promised to watch it (and suggested soccer).

When the demon Neron manifested his corporeal form on Earth, Metallo was one of dozens of super-villains who accepted an offer of power in exchange for his immortal soul. Neron granted Metallo greater flexibility and range with his powers, enabling him to morph his body into more complex mechanical constructs--Metallo could now draw on any metal nearby to create a new body for himself, fulfilling a dream to never be rendered "just a head" again. During the "Underworld Unleashed" event, Metallo teamed up with Gorilla Grodd in an effort to hijack a truck carrying nuclear warheads. Batman, Robin and the Huntress arrived in time to prevent the theft, and Metallo escaped.

During the ensuing chaos, Metallo arrived in Washington, D.C. where he encountered Steel. Steel was trying to diffuse a riot and had little patience for Metallo. He managed to knock his head off and send it into the Potomac, but Metallo recovered and came back for more. Steel had meanwhile responded to a bomb threat at a mosque. He took the bomb and started to fly out to sea, only to be spotted and pursued by Metallo. When he got close enough, Metallo pulled the bomb to himself, believing he could then be in total control of it. Unfortunately for him, while the casing was metal, the bomb itself was plastique. Metallo's huge frame absorbed most of the blast, although the shockwave still knocked Steel from the air.

Metallo would come back to Metropolis, this time when the Man of Steel was in his "Man of Energy" phase. Still unused to both his own new powers as well as Metallo's, Superman was initially only able to battle him to a standstill. Fortunately for Superman, the Ray arrived and helped him understand and use his new powers. Working together, they were able to defeat the cyborg, but Metallo eluded capture. Making his way to the nearby naval base, Metallo managed to convert an entire aircraft carrier into a new body. Superman defeated him soundly this time around, using his powers to drain off the carrier's nuclear energy--a move that nearly proved to great for even Superman. Metallo is taken into custody.

Metallo was given a new, "Godzilla size" body by Brainiac 13 during Y2K. The new body also featured a "kryptonite heart" as a power source. Luckily for Superman, the Metal Men arrive in Metropolis. While they have no more luck against Metallo on their own, Superman has Lead coat over his body, protecting him from the Kryptonite. Superman flies straight through Metallo's heart, destroying it and causing Metallo to topple, deactivated.

Metallo was placed in the orbiting Stryker Prison facility after Our Worlds at War!. When General Zod of Pokolistan changed the sun to red and seized the White House, President Lex Luthor rescued a stranded Superman and took them to Stryker's. Metallo removed the armor Zod had placed around Superman. Like many of the other villains, he questioned why he should bother helping Luthor or Superman save the world from Zod. Nevertheless, he did agree to help. While Superman lead a cadre of villains to Earth, Metallo transformed himself into a new colossal spaceship. With Luthor at the "helm," they flew towards the sun to disable the "solar converters" Zod had placed around it. They were attacked by Ignition, but Metallo split his body up into several drones. They successfully destroyed the converters, enabling Superman to defeat Zod back on Earth. Metallo returned Luthor to Earth, and while it is not clear exactly what occured next, Luthor made it clear that he did not pardon at least the other prisoners.

Some time later, Superman and Batman embarked upon a quest to rid the world of all Kryptonite. They tracked down Metallo and Superman forcibly removed his Kryptonite heart. Batman quickly replaced it with an electronic substitute that enabled Metallo to continue to live, but also restricted the use of his weaponry.
Superhero Class