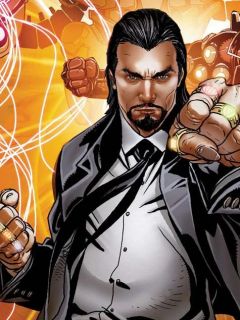 Born circa 1920, the future Mandarin was raised by his embittered aunt following his parents’ deaths, and as an adult he used his brilliance and family wealth to attain prominence in the Kuomintang Party’s reign over China. The Communist Revolution of 1949 cost him his position and power, although the population he had once commanded still regarded him with nigh-mystic awe. After years of seeking some means of regaining greatness, he ventured into the mysterious Valley of Spirits, where he discovered the millennia-old wreckage of a starship of the reptilian Kakaranatharian, or Makluan, extraterrestrial race, and the ten mighty rings which had powered the vessel. Unaware that the Makluans themselves remained at large, posing as humans, the Mandarin spent decades mastering Makluan technology, then several years more conquering the valley’s adjacent villages and establishing a network both of citadels and of loyal followers such as Po, Yu, and Li Fong. His long-range goal was to conquer China, and then the world, which he claimed he would rule with the “wisdom and harmony” of his nobleman ancestors. During these years he fathered a son, Temujin, whom he sequestered in a remote monastery, and took the girl later known as Madam Macabre as a student; another girl, Mei-Ling, became betrothed to marry him in adulthood. He also discovered the dormant alien robot Ultimo within a volcano, and worked for years to revive him using a combination of science and magic.

In recent years, seeking assistance to master the Makluan rings’ full power, the Mandarin became the patron of the Sin-Cong revolutionary Wong Chu, who abducted the Chinese genius Ho Yinsen and American industrialist Tony Stark. However, Yinsen sacrificed his life to enable Stark to escape and overwhelm Wong Chu’s forces using his first Iron Man armor. After disciplining Wong Chu for his failure, the Mandarin had the opportunity to stop Iron Man from departing but, intrigued, allowed him to pass unhindered, little realizing the armored hero would become his most persistent nemesis.

Several months later, Iron Man visited China to investigate the Mandarin for the U.S. government. Using the rings and his own combat skills, the Mandarin nearly defeated Iron Man, who nonetheless outwitted him and escaped. Soon after, the pair again clashed when the Mandarin pulled Stark surveillance missiles from the sky to use for his own purposes, then manipulated the Chinese government into test-firing a missile which, unknown to them, was intended to trigger world war, but Iron Man defeated him both times. Affected by Doctor Doom’s Emotion Charger, the Mandarin next joined many other super-villains in attacking the Fantastic Four’s Richards-Storm wedding; later, he recruited the Swordman, whose sword he equipped with greater technological weaponry, to serve as his spy within the Avengers, but the Swordsman ultimately balked at destroying the Avengers and betrayed him.

Finally activating Ultimo, the gloating Mandarin teleported Stark to his citadel to observe the supposed triumph, but Iron Man lured the giant back into the volcano, temporarily imprisoning him. Later, Iron Man again prevented his foe from provoking world war with a second missile scheme. Reactivating Ultimo and rehiring the Swordsman, along with Living Laser, Power Man (later Atlas of the Thunderbolts), Enchantress, and the Executioner, the Mandarin launched an effort to empower a world-wide hate-ray, only to be foiled by the Avengers. He next mentally controlled the Hulk and used him to wreak havoc, thinking each nation would blame the other for the behemoth’s attacks, but his control was disrupted by Nick Fury and Yuri Brevlov of S.H.I.E.L.D. Undaunted, the Mandarin, now accompanied by the adult Mei-Ling, used a Hulk robot to abduct Stark’s lover Janice Cord while framing Stark himself for enemy conspiracy, but Mei-Ling, touched by Cord’s love for Stark and disillusioned by the Mandarin’s cruelty, sacrificed her life helping Iron Man defeat him. A second attempt to control the Hulk with the help of the Sandman also failed, as did efforts to foment unrest by abducting peacemaker Dr. Robert Hoskins, who was rescued by Captain America.

Hoping to enhance his rings’ already phenomenal power, the Mandarin manipulated the Royal Family of Inhumans into obtaining the mystic Eye of Yin, created centuries ago by Makluan-trained sorcerers, but he was overpowered by Black Bolt, who absconded with his rings. After allying himself with the former Russian super-operative Unicorn, the Mandarin regained the rings via a Makluan headband device and returned his attention to Tony Stark. In the identity of Gene Kahn, he stirred unrest among Stark’s employees, then, when exposed, fought Iron Man alongside the Unicorn. However, careless use of the headband inadvertently switched the Mandarin’s consciousness with that of the terminally ill Unicorn, and he quickly abandoned the fight to rectify the situation. Adding insult to injury, he discovered that a rival mastermind, the Yellow Claw, had, at the prodding of the extradimensional Black Lama, seized his current base, one of his Chinese castles, in his absence. Retiring to an underwater base, the Mandarin captured Sunfire and forced him to power the machinery that restored him to his rightful body, but even with Ultimo’s aid, regaining his castle was not so simple. Iron Man and Sunfire intervened in the conflict, which ended with the Mandarin seemingly slain by the Yellow Claw’s robot surrogate, the Makluan rings claimed by the Claw’s servant Loc Do.

However, the Mandarin’s new control of his consciousness enabled him to transfer his intellect into the rings themselves, and he remade Loc Do’s body into a younger version of his own. Despite his new body, his customary schemes to foment world war were once more thwarted by Iron Man. Efforts to obtain Wakanda’s Vibranium via the resurrected Killmonger proved no more successful, and his attempt to destroy China’s rice crops, intended to drive the Chinese government into invading other nations, was disrupted by an alternate Iron Man (Stark’s temporary replacement Jim Rhodes). Later, while experimenting with his rings, the Mandarin was rendered comatose; although he recovered physically, he was left amnesiac when elderly Chen Hsu, the millennia-old captain of the disguised Makulans, stole and replaced one of his rings, still tied to his consciousness and thus necessary to restore his memory fully. As Zhang Tong, the Mandarin, still driven by a need for conquest, became a criminal overlord in Hong Kong, allowing ten underlings to use his rings as his operatives in the so-called Hand. Having no memory of his grudge against Stark, he sought to force a business alliance but was again foiled by Iron Man, who nonetheless found himself unable to interfere with his opponent’s criminal network. Soon afterward, the Mandarin joined several other masterminds in the so-called “Acts of Vengeance” anti-superhero conspiracy, then allied with Matsuo Tsurayaba of the ninja Hand, but these endeavors were disrupted by the Avengers and the X-Men, and subsequent worldwide attacks on crime prevention specialists were ended by Nick Fury’s intervention.

Eventually recognizing Chen Hsu’s theft, the Mandarin confronted the old man, who returned both his ring and his memory, then guided him in commanding the gigantic Makluan dragon Fin Fang Foom, with whom the Mandarin soon seized control of one-third of his native land. Tony Stark and James Rhodes, both armored as Iron Man, intervened, but the Mandarin turned against Hsu and Foom upon learning that the Makluans wanted to rule Earth themselves; with Stark channeling his own armor’s power through the rings, the Mandarin seemingly destroyed the Makluans, but his hands were burned off in the process. Eventually recovering, he grew new reptilian hands and recovered his rings, then discovered the Thuviskaroth of Cataphylaxis, a.k.a. the Heart of Darkness, a centuries-old talisman of cosmic evil. Forced through a psychological gauntlet in which he overcame personifications of his earlier schemes, he emerged near-mad with supernatural power and, in a departure from his usual methods, mystically reverted China to its medieval state, supposedly saving the world from the corruption of the technology he had commanded so long, with the assistance of the superhuman Avatars. While War Machine (Jim Rhodes) and Force Works fought the Avatars, Iron Man penetrated the Mandarin’s defenses and infected him with a techno-organic virus, nullifying his Heart’s mystic bond and again rendering him amnesiac as the janitor Chu.

Regaining his identity, the Mandarin rebuilt his power base once more, clashing with Squirrel Girl and using the Espionage Elite, the Dreadnoughts, and others to undermine Stark, whom he now knew to be Iron Man and of whose capabilities he was unsure following the hero’s revival from the Onslaught crisis. Aboard his immense aircraft, the Dragon of Heaven, the Mandarin invaded Russia using a mercenary army fought by the Avengers and Winter Guard, but this was merely a pretext to lure Iron Man into action and better test him in battle. Although satisfied Iron Man indeed remained a worthy adversary, the knowledge seemed to do the Mandarin little good when Iron Man destroyed the Dragon of Heaven’s power source, toppling it from the sky. The Mandarin was seemingly slain in the disaster, but this may be only the latest of the many seeming deaths from which he has returned.