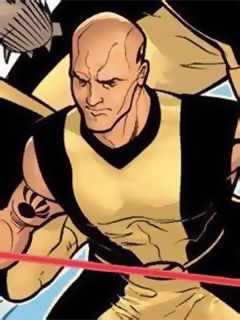 Ink was one of the members of the Young X-Men team that believed themselves to have been organized by Cyclops. He was a loud-mouthed, rude teenager who didn't care what others thought about him, as proven by when he stood up to two police officers who wished to arrest him in a tattoo parlor. He fought back using his bio-hazard tattoo, which produced the same effects as a biochemical weapon, making the police officer instantly very sick. Despite this, he was arrested anyway.

While sitting in jail and waiting to rot, Eric sassed a guard who ended up freeing him. As they were leaving, the guard turned off an image inducer and revealed himself as Cyclops.

Cyclops gathered Eric along with the other members of his new team into the New X-Men's former training simulator, the Danger Cave, built by Prodigy. There he trained them to take on their first mission, to take down the latest incarnation of the Brotherhood of Mutants, which consisted of the former New Mutants.

Ink and Blindfold were assigned to the Blue team and were sent to apprehend Dani Moonstar. n their way to Moonstar's cabin, they had a conversation where Blindfold implied Ink was not a mutant. They were successful in their mission, and just after leaving Moonstar unconscious, Ink knocked out his partner, warning her that she should have seen that coming.

Ink was paid to deliver both Blindfold and Moonstar to Cyclops, which he did, though he refused to kill them for him. Later, when "Cyclops" was revealed to be Donald Pierce with an image inducer, Ink had a change of heart and fought alongside the former New Mutants and his team of Young X-Men.

It was decided that the team would continue and that Ink would be allowed to stay even though he worked with Pierce. During the next mission, the team discovered that Ink was not a mutant, causing him to leave the team.

Off on his own and depressed, he got drunk and was attacked by the Hellfire Cult, a group that attacks mutants, the irony is not lost on Ink. Cipher shows up and tells Ink that the team needs his help. Resistant at first, he decides to help but goes to his tattoo artist, the real mutant, and gets two more tattoos, the caduceus symbol that heals and a Phoenix Force tattoo. He arrives on the battle field and heals Moonstar, who had been shot and proceeds to take away the powers of all the Y-Men. Using all that power had put the tattoo artist into a coma. It is decided that, even though he is not a mutant, he will stay on the team, because Scott fears him running around unchecked with Phoenix-like powers.

Ink befriended Graymalkin, both of whom are new to the X-Men family. Ink asked about Cipher, but Cipher, who was eaves-dropping, bursts in and stops the conversation. Shortly after this, when Danielle Moonstar found Dust dead, Ink attempted to use his untested Phoenix Force tattoo to revive her. Dust was revived, though the strain left Ink catatonic.