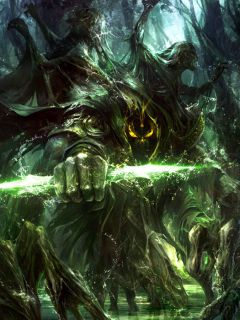 Gorgon the Godslayer was born the destroyer of entire pantheons. He knew of his destiny the moment his parents were destroyed by the wrath of several demons and no god tried to help him. He, his aunt, and his sister got away to a dimension outside the multiverse, but he swore revenge on the demons and the gods. Gorgon was consulted by the God of Chaos, Zimbokei, in his dreams to go rid the world of all the demons so someone can show salvation to the multiverse. The Wishing Goddess appeared in his dream and comforted him for his loss and told him that he could ask for any wish that he wanted and she would grant it to him. He asked to find a weapon, that holds so much power, he could rid the world of the demons that destroyed his family. She told him to ask for anything else, but Gorgon told her that if she did not satisfy his wish, that she would be breaking her promise. The Wishing Goddess then told him that she cannot give him the weapon as it was beyond her limitations and rules, but she can lead him to it. Gorgon followed her directions to the Nekrosword. However, some gods were protecting it, so Gorgon defeated them all and took the sword. However, this was part of Zimbokei's plan, and his servent gods, followed Gorgon back to his secret hiding place, and killed his sister, who prayed to some gods to protect her, to no avail. Out of rage, Gorgon unleashed the power of the Nekrosword, which boosted his power exponentially, and he slaughtered all of the gods who attacked his sister, and then killed the demons who killed his family. Gorgon then followed the instructions of the Nekrosword to Zimbokei, and slaughtered him. He then knew that the more gods he killed, the more power he would gain. Gorgon has killed hundreds of thousands of gods, gaining high-multiversal levels of power. If the Nekrosword is removed or taken away, he loses the majority of the power, but is still very powerful. Gorgon then slit the fabric of the dimension, and seperated it away from all the other universes, away from the multiverse.