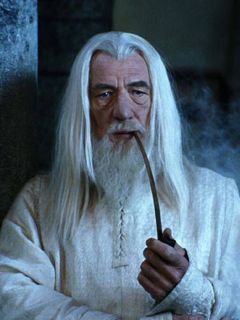 Gandalf is a very old, very wise and very powerful wizard and one of the Ainur who entered the world of Arda at the dawn of creation. He is a main character as well as one of the main heroes in J.R.R Tolkien's Middle-Earth saga and Peter Jackson's live-action adaptation of the books respectively.

Being thousands of years old, he is known far and wide by all: men, elves, dwarves, hobbits, and evil such as Sauron and orcs. Has many friends and known as Gandalf the Grey, Gandalf the White, Mithrandir, the White Rider, the Grey Pilgrim, etc. He is the servant of the Secret Fire, wielder of the flame of Anor, which is said where he is to be from.

During the third age, he guides Frodo in destroying the One Ring, and participating several battles during the War of the Ring. As a member of the High Order of wizards, he travels all around Middle-Earth visiting friends and embarking on journeys. In the Hobbit and the first film, the Fellowship of the Ring, he was Gandalf the Grey, cloaked in all gray and wields a wooden staff. He offers to guide Frodo to Mordor to destroy the Ring and several comrades of all races join them.

While traveling through the mines of Moria, he duels with a monstrous demon of fire: the Balrog. He sacrifices himself and falls to his supposed death. He returns in the last two films reincarnated: Gandalf the White, having survived the fall. This time, his hair, beard, cloak and staff are all white, which some mistake him for Saruman