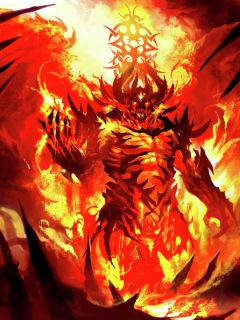 Hellion powers, including projection of Hellflare

Fire Damon is among the most powerful beings of the Varosverse from the entities known as Ancient Gods. His main power, the Hellflare, is a form of energy that he fires from his eyes or hands as either a concussive force or a disintegrating energy which is capable of erasing living objects and organisms from existence. Some super-beings, such as Star Storms and The Spirit, have proven to be resistant to the Flare although with a great deal of pain. Also, The Spirit was able to deflect them, These powers stem from a cosmic energy source within Hellion called the "Hell Effect". These powers can also resurrect fallen beings previously killed by him, depending on the Hellish Lord's will. Damon has pinpoint control of this energy, and his unerring aim allows the flare to travel in straight lines, bend, or curve around corners and even pass through matter or other forms of energy. He can also teleport himself or others through time and space

Fire Damon’s strength is depicted as immensely high, breaking a spirit shield with his bare hands. He has easily overpowered two Omega Heroes at once, and the entire League of Justice. He can also move with great speed, as he has been able to catch Star Storms off guard and he is known to be able to react in picoseconds.Even without his full power and strength, Damon has shown to be able to hold out his own against an Olympian God such as Zeus. He can also increase his physical size.Damon also has additional powers of telepathy and telekinesis, and he can create psionic avatars. Since Damon is a deity, he is also immortal, having lived for several billion years.He can regenerate from complete disintegration instantly, making him nearly impossible to kill.[He is a needed force within the universe]

In "The Infinite Evil Saga," Damon displayed a range of deity-like powers, such as transposing the positions of two dimensions in different realms, taking mental control of the entire population of a planet, instantly absorbing all the information from another being's mind, manifesting the worst fears of other beings as realities, easily defeating incredibly powerful beings such as Heart stone, Star Storms, and Black Wolf, and pronouncing a curse.

Despite his extraordinary physical powers, Damon rarely engages himself personally in confrontations, as he prefers to use his superhuman intellect to manipulate or control others to his ends. Damon has displayed his godly abilities by sensing the death of his son Hexkor and fluctuations of the energy of the "Hellwave". Damon also commands all of the military and technological resources of Hellion.

Damon has shown to be able to drain the life force of other godly beings in order to rejuvenate himself and/or return to his full power. Demi-gods are capable of slowly rejuvenating Damon but a god (such as Zeus) can make Damon highly weakened by draining his life .

Due to the nature of Hellion being outside time and space and existing in their own dimension, Hellion is not affected by the wars and effects on the Infinite Earths and thus, have the same feats across all continuities/Universes.

Chokes The Man of Power

One shots Blazar with a punch

Briefly knocks out Father Spirit with a punch

Breaks a 16 inch thick Stourn chain like a toothpick

Punches Star Storms through time in a infinite time loop

Solos a team of Zanaroths.

They have comparable power to Juggernaut

Beats Stat Storms infused with the power of the Mystic Gods When you combine just one Mystic soul equals power capable of destroying a universe and there were thousands of Mystic Gods dead by this point.

Backhands a speed-blitz from Star Storms

Leaves so quickly . Star Storms attacks a after image

The Man of Power doesnt even see him move

Reacts in a picosecond

Tanks a cosmic shower from Blazar

Easily shields a blast from Tyton

A Megaton Touch from Warhead doesn't even make him flinch. Apparently it is supposed to be the equivalent of 3,000,000 megaton bombs

Easily survives the magical attacks of Koritsi. He has all of magical power in the Multi verse , plus a boost of spirit energy

Weakened, casually takes a hit from a pissed off Man of Power

Easily survives an attack from Flamer

Takes hits from an amped Star Storms and Keystone

Casually no-sells all of Blazars energy

Easily survives a combined attack from the League of Justice , Alpha Zero , Blazar and Doctor Destiny

Takes a full assault from the Lightning Bolt without harm

Casually survives a blast that could destroy all of existence

Survives a blast from Tyton

The Hellion Power is a cosmic energy that Fire Damon wields as his main source of power. It is an incredibly versatile energy source native only to him, and it cannot be stolen from him. It will kill anything that tries and takes it

Starts a hellstorm with his power

Uses 3/10ths of his power to destroy a universe

Both Lighting Bolt and Star Stormd cannot escape the Hellflare

Ice Age is hit by the Hellflare and instantly destroyed

Casually destroys Spirits with it

It hurts Star Stormd even though he isn't the target

Restrains Blazar and The Spirit

Incinerates The All Might One humiliated Tyton and Koritsi

One-shots Ice Age has Superman level durability, being a Glacientite.

Turns Lightspeed into a statue

Completely incinerates Soren with a touch

Can make avatars out of the elements, even after being dead

Avatar kills a bunch of Hellians

Avatar beats the Society of Destruction of Earth-56

Makes an avatar while trapped in the Infiniverse

Teleports away before Hexkor can react

BFRs Doctor Destiny to the Future

Increases his own size to fight Tyton

Pulls The Spirit out of the Spirit Realm

Brings Hexkor back to life

Brings Ice Age back to life

Brings All Mighty One to life

Damon can gain complete control over the minds and bodies of anyone with this power in his hands. It can also amp his power.

Easily goes through a time storm

And takes over most of the universe

This form is when Damon has absorbed the powers of the chorkna staff (his weapon) into himself, giving him nigh-omnipotence. Though no amount of amping should make you match Amber as the Amber is literally everything else, he still fights her.

With Chorkna, restrains The LDN entity (Slightly inferior to Amber)

With Chorkns, tears holes in reality as an after effect of his fights

This is when Thurber inhabited the body of Michael Smith and spear-headed Infinite Evil all of the Fire Damons are just mere Avatars of himself placed inside each universe. The true Fire Damon was subject to the final war between Good and Evil and almost destroyed the Multiverse.

Fires a Hell flare back in time to kill Ice Age

Cuts off Star Storms and Lightspeed from the Being Force

Creates a singularity that swallows up half the multiverse