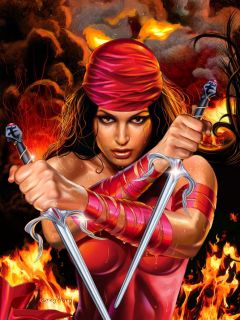 Elektra has demonstrated the ability to mesmerize others, and as such make them see illusions or other phenomena.

Mind Switch: Elektra's strangest gift is her ability to "throw" her mind into those of others. For instance, she was able to track down her enemy, Ken Wind, by temporarily "borrowing" people's minds and acting through them while she hunted around for her prey.

This temporal mind control enables her to literally sniff out the psyche, or intent, of her targets. It saw extensive use during Elektra: Assassin, in which she was heavily reliant on only her ninja powers. It is unknown how long the effect lasts, but Elektra has gone a full two days or more in another person's mind while they zoned out in hers.

This "mind jump" ability might explain why Elektra is always a step ahead of her competition, or seems to know where her target is at all times. An extreme example would be the time she murdered an ambassador in South America. The man was sitting against the wall when Elektra sought out his mind and trusted her katana to enter his heart in the perfect spot. Unerringly, it did: the sword pierced through thick walling and the politician was slain where he sat. The unusual addition of her telepathic skills makes Elektra an omnipresent assassin, to say the least.

Elektra has Demonstrated an ability to remain hidden and undetected by other Telepaths. By using a Telepathic technique that she learned during her time with the hand, Elektra can create a mental shield around her mind keeping herself hidden from not only other psychics but mind locating machines like Cerebro.

A high powered Chi based Scream Originally used by Shang-chi, By focusing on her Chi and puckering her lips together Elektra can use this technique to perform a High pitched scream that can render a person Permanently deaf, and/or by furthering focusing on one target can kill.

Nick Fury can attest to the usage of this eerie mind control in person. In the 90's, he conducted scientific experiments on the captured assassin and found strange morphology in her brain that explained her phenomenal reflexes, yet sane rationale. Elektra moves with heightened primal instincts but the more evolved parts of her brain remain intact, preserving her intelligence. In other words, she thinks like a woman and strikes like a cobra.

Elektra has mastered many martial arts of China Siam(Thailand) and Japan. While many of them are unstated, Ninjutsu is the most noticeable one.

She is a master of many different weapons. Among the known are Okinawan Sai which are her usual weapons of choice (it is presumed she may have trained with all Okinawan Kobudo weapons), katanas, knives, sansetsukon (3-sectional staff), and (shuriken) throwing stars.

Elektra is an Olympic-level athlete and gymnast.

Due to her ninja training, she can blend in with the shadows and remain undetected by most humans.

She is an excellent acrobat capable of many difficult feats.

Elektra is skilled with throwing weapons and sharpshooting.

She can control her nervous system enabling her to deaden her body to physical pain, control her emotions, and even her bleeding rate.

She can Locate different presser points Around a persons body, and by doing this she can Knockout, Paralyze, injure, or Kill a person.