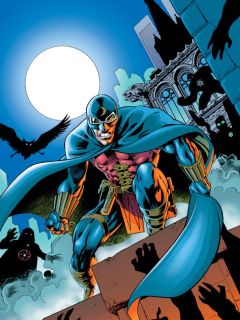 Mcnider was a skilled hand to hand fighter, specializing in the martial art of jujitsu. His enhanced sight also helped his fighting ability, making him able to take on multiple criminals in complete darkness. He also had a mean right hook, and was an experienced boxer, having trained by Wildcat while serving in the Justice Society Of America.

Gymnastics: McNider is also a superb athlete, and is proficient in several athletic aptitudes including gymnastics and weight training.

Charles aided a young owl back to health and it inspired him to become Doctor Mid-Nite, and trained the young owl, of which he named Hooty, to help him fight crime.

He was also an experienced journalist with an acute knowledge of criminal subculture.

Stealth: His power helped him to be come a master of stealth. His powers combined with his athletic abilities and specially made smoke bombs, dubbed " Black Out Bombs", allowed him to take criminals, by surprise, and scale rooftops undetected.

Doctor Mid-Nite was and still is considered to be the worlds greatest, and foremost, "Super Hero Surgeon". His infrared vision help him to be able to see things that even the best non powered doctor could. He was also a gifted physician. As a top physician Mcnider was capable of all manner of various surgeries, including doing it in the dark.