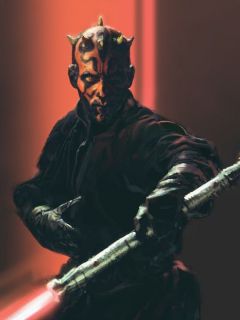 Darth Maul, later known simply as Maul, was a male Dathomirian Zabrak Sith Lord who lived during the waning years of the Galactic Republic and the age of the Galactic Empire. Maul was born to Mother Talzin of the Nightsisters and was raised as a Nightbrother on Dathomir, before being taken by Darth Sidious as his apprentice. Sidious shaped Maul into a weapon of the Sith to bring about the downfall of the Jedi Order, and Maul revealed himself and the Sith to the Jedi during the Invasion of Naboo, part of Sidious' plot to take over the Republic. During the Battle of Naboo, Maul fought in a lightsaber duel with Jedi Master Qui-Gon Jinn and Padawan Obi-Wan Kenobi. Maul killed Jinn, but the Sith Lord was grievously wounded by the Padawan and fell into the depths of a Naboo reactor shaft.

Though the Jedi and Sith both believed Maul was dead, and Sidious replaced Maul with the fallen Jedi Count Dooku as his new apprentice, Maul survived his encounter and retreated into exile in the Outer Rim. He dwelled on Lotho Minor, where his shattered mind was filled with thoughts of revenge and his body was repaired with crude, cybernetic, spider-like legs. During the Clone Wars, Maul was discovered by his brother, Savage Opress, and taken to Mother Talzin, who gave him new robotic legs and restored his mind. Maul, who saw that the war he was supposed to be part of had started without him, declared himself and his brother the true Lords of the Sith, who would see revenge against Kenobi and overthrow Darth Sidious. He organized a band of criminals known as the Shadow Collective, which included the Mandalorian splinter group Death Watch, and took over the planet Mandalore. Maul killed the Death Watch later, Pre Vizsla, and became the Mandalorian leader. For his revenge against Kenobi, Maul killed Satine Kryze, the Duchess of Mandalore, with whom Kenobi had once had a romantic relationship. Maul was captured, and Opress killed, by Darth Sidious during the Battle of Sundari.

Sidious imprisoned Maul, but soon allowed him to escape so the renegade Sith Lord could lead Sidious to the person he saw as his true rival for power: Mother Talzin. Maul rallied his forces and briefly entered into what he believed was an alliance with Count Dooku, who feigned turning against Sidious, but Maul fell into Sidious' trap on Dathomir. The Shadow Collective was destroyed by Dooku's Confederacy of Independent Systems, while Mother Talzin was killed. Maul retreated from the battle, but he never gave up his desire for revenge against the Sith. Years after Sidious transformed the Republic into the Galactic Empire, with himself as emperor, Maul traveled to the old Sith temple on Malachor to seek the knowledge he needed to destroy Sidious, his new apprentice Darth Vader, and the Empire's Inquisitors.