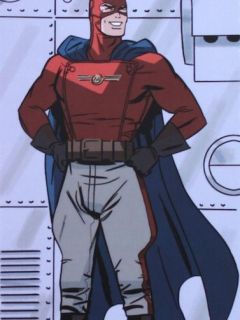 As a child, Nelson Gardner was sickly and asthmatic, but through years of training he managed to overcome his condition and eventually started playing football in college. After college, he joined the U.S. marines. He later adopted the identity Captain Metropolis to fight crime. Along with Sally Jupiter, he was a founding member of the Minutemen and later, he founded the Crimebusters with Ozymandias. He was apparently in a relationship with fellow Minuteman Hooded Justice, a fact that the Minutemen's publicist, Laurence Schexnayder, worked very hard to cover up. He started the Crimebusters because he thought that by pooling the efforts of the other vigilantes, crime could be effectively wiped out in Manhattan and outside. Both teams eventually fell apart due to personal problems from the team members. He contributed to the hatred of superheroes by expressing bigotry towards African-American and Hispanic people. He was decapitated in a car crash in 1974; the accident, however, would later prove to be suicide. Despite this, there is fan speculation that he, along with Hooded Justice, is still alive at the time of the graphic novel.