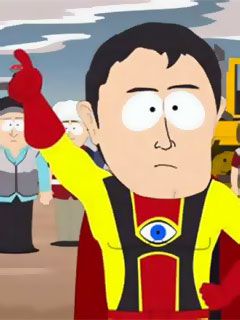 Jack "Captain Hindsight" Brollin is a superhero who "helps" people in need by appearing at the scene to lecture them about what they did wrong to get into a certain accident and what methods they could have used to avoid it, instead of actually rescuing them. Despite this, civilians still feel much better afterwards. He removed his special ability through the machine he gained it from in Mysterion Rises, and went back to work as a news reporter again. He was personally invited to superheroes group Coon and Friends by Cartman, but he refused to join.

Captain Hindsight is the only superhero in South Park to wear an actual, typical superhero costume, which is not made up of other mix-matched clothes. His hair is black with a single curl on his forehead, whilst his head is shaped closer to a regular person’s than the rest of the cast, with a slight cleft chin. He wears a yellow base suit, with red briefs over it, which has a black H emblazoned on his chest, with a blue eye above it. Around his waist is a plain red belt, with a red buckle. He covers his hands and feet with a pair of matching gloves and boots, as well as adorning a red cape, which bears his symbol on the back. Overall, his appearance is very similar to Superman's, with yellow replacing blue and a different symbol.

As Jack Brolin, he wears a blue jacket and matching pants, with a white shirt complete with tie, due to his career as a reporter, another allusion to Superman.