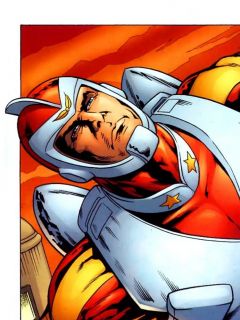 While working on a dig in Caramanga, South America, Adam was transported to the planet of Rann via the Zeta-Beam. He immediately befriended the Rannians and took up a flight pack and raygun to assist them. While there, he also fell in love with a Rannian woman named Alanna.

As the Zeta Beam's teleportation effect wore off, Adam was returned to Earth. However, he was able to return to Rann by following a schedule of where the Zeta beam would next hit. He scheduled his archeological trips to coincide with the location and time. He also married Alanna.

It was initially believed that the Zeta Beam was used simply as a friendly communication between Rann and Earth. However, it was later hinted that Rann was searching for suitable mates from other planets as more and more of the Rannians were found to be sterile.

Adam met the JLA after helping them battle Kanjar-Ro, but declined their membership offer. He continued to act on both Earth and Rann, helping to improve relations among different planets.

While still on Earth, Adam was falsely told that Alanna had died during childbirth. He was later reunited with his wife and daughter.

Adam was later told Rann had been destroyed by Starbreaker through an 'Omega Beam.' However, this was actually an early warning by Sardath. Adam was able to prevent Rann's destruction with the help of the Omega Men and the few remaining Darkstars although Thanagar was destroyed. The surviving refugees settled on Rann.

The Thanagarians and Rannians recently began to fight each other after being manipulated by Blackfire. Adam and Green Lantern (Kyle Rayner) were able to halt the war.

Adam Strange was stranded on a paradise-like planet with fellow heroes Animal Man and Starfire after the battle with Alexander Luthor and Superboy-Prime, an incident that resulted in the loss of his eyes. After several weeks, Adam was able to get his spaceship working, and they departed for Earth. Their ship, however, was attacked by Devilance, who they had encountered on the planet and who had pursued them into space. Lobo appeared just in time to destroy Devilance, and after a some negotiation, agreed to help them out.