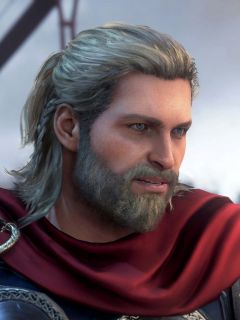 As the son of Odin, Thor Odinson grew up in the realm of Asgard. A skilled warrior and blessed with the ability to control lightning, he was worshipped by the Norse people of Midgard, who dubbed him the "God of Thunder and Wind". Thor also wielded the hammer Mjolnir as a weapon, using it to channel the Odinforce. Thor also visited the Earth on several occasions and was aware of the Kree Empire.

At some point, Thor was banished to Earth by his father to teach him humility. Whilst there, he became involved with other heroes when his adopted brother Loki began wreaking havoc in an unspecified event. This led to the foundation of the Avengers, which Thor became a member of. During his time on the team, he worked alongside Iron Man, Black Widow, Hawkeye, Ant-Man, the Hulk, and Carol Danvers. Thor was among the Avengers that discovered Captain America and, upon reviving him, received a hard punch from the super-soldier. He quickly grew to respect the super-soldier and regarded him as a better man than himself. Thor's banishment to Earth also ended at some point, which led to him being granted access to its Bifrost.

When the Lethal Legion attempted to rob a SHIELD equipment shipment, Thor was one of the Avengers to respond. During it, he engaged Absorbing Man and subdued Whirlwind. After defeating the Legion, Thor helped round up the group for arrest.

At some point afterward, Thor was asked by Stark and Banner to help complete the experimental Stark Portal at the Maria Stark Fields. Using Mjolnir and the Odinforce, he channeled lightning into the device as a power source. However, Thor was unable to control it, causing the energy levels to spike and the device to be destroyed.

Believing that the Bifrost provided better means than the technology, Thor suggested that they used it as an alternative and asked Heimdall to open it for demonstration. When Stark refused to use it due to convenience and concern about Odin's approval, he asked for him to close it. However, Heimdall revealed he couldn't, due to an external factor.

When Stark left to avoid having to deal with it, Thor entered an argument with Banner when he perceived him as threatening Asgard. Unknown to both, they were actually influenced into doing so by Loki, who was invisible to avoid notice. As tensions heightened, the scientist transformed into the Hulk, leading them to enter a fight.

The battle eventually led onto the streets of Brooklyn, with Thor conjuring a storm to help him in the fight. However, he quickly noticed Loki in the rain, causing him to realize the duplicity. Using Mjolnir, Thor conjured a jet of water to reveal his half-brother and knocked him unconscious. After informing Hulk, the fight finally stopped, and handed Loki over to Odin.

That evening, Thor informed Stark of the battle. When informed of the damage, he brushed off concerns about public criticism of the battle, blaming it on Loki's manipulations. Believing that the group should share a drink, he convinced Banner and Stark to celebrate their victory.

Thor was present during the A-Day event, alongside Captain America, Iron Man, Black Widow, and Bruce Banner. Whilst looking at the Stark Booth, he met a young Kamala Khan, with whom he bonded over origins and weaponry. Promising to remember her name, Thor disappeared to an unknown section. He was later searched out by Cap and Widow to appear at the main event, appearing onstage with them, Banner, Monica Rappaccini, and George Tarleton.

During the event, mercenaries attacked the Golden Gate Bridge. Alongside Iron Man, Thor flew ahead to intercept the enemy forces and rescue any civilians caught in the crossfire. Thor engaged the mercenaries on the southern side of the bridge, later making his way onto it to fight more of the forces. After learning that the group was using Stark's Pulsar Tanks, he entered an argument about how his inventions are dangerous, though Widow put a stop to it quickly.

Losing contact with Rogers, the group learned from Maria Hill that the mercenaries had deployed a Sonic Bomb. Using Mjolnir, Thor cleared mists to allow the group more visibility, allowing Iron Man to disable it with a unibeam blast. Learning that the driver was the mercenaries' leader, Taskmaster, he, Stark, and Hulk worked to secure the bridge cables when Masters activated the bomb. After Widow defeated him and disarmed the bomb, the Avengers discovered that the whole of San Francisco was being torn apart by something reacting in the bay reacting with the Chimera. Flying to help Cap, Thor was unable to reach it in time, only able to watch in horror as the helicarrier crashed into the bay.

In the aftermath, Thor blamed himself for not returning to the Chimera and saving Rogers. At some point during the resulting inquiries, he abandoned the Avengers and stepped away from heroics, mainly because of guilt. Thor also decided to abandon his claim to Asgard, sending a message to Odin informing him of his decision and reasoning. Out of respect for Rogers, he also left Mjolnir at his statue in Heroes Park to prevent it from being torn down.

Compelled to stay close to Mjolnir in case he was needed, Thor took to living in Manhattan under the name "Donald Blake". Serving as a medical volunteer, he started to help those in need in repentance. During this time, he also became close with a fellow volunteer, Dr. Jane Foster.

After learning that the Avengers had reassembled and that the conflict between them and AIM had spread to the streets, Thor decided to once again become active as an Avenger. Arriving near the AIM experience, he summoned Mjolnir, using it to save Phil Sheldon from being crushed by a Deadbolt. Flying up to the rebuilt Chimera, Thor rejoined his old friends to help fight off AIM's forces, during which Tarleton confronted and mocked him for his guilt. After defeating the Dreadbots, he used Mjolnir to channel lightning into the helicarrier's engines, preventing it from crashing into Manhattan.

Reassembling on the command deck, Thor reunited with the group and confronted them on their actions, especially how they'd seemingly disregarded those below. During it, he was reintroduced to Kamala, who he easily recognized from A-Day. As they settled, the group finally watched a decrypted video file retrieved from AIM's servers by the teenager. Hoping that it was incriminating proof that Tarleton caused Rogers' death, they instead learned that Cap had caused the Chimera's crash by destroying the Terrigen reactor. With the group beginning to argue and fall out again, Thor left for places unknown.

At some point, he presumably returned to Asgard, receiving a set of armor to don. After learning that Stark had gone to the satellite Ambrosia to retrieve evidence of Monica's experiments, Thor decided to also help him. Arriving shortly after its destruction, Thor found him in an escape pod and learned that Rogers, who had survived the events, had been discovered in the lab. After exchanging greetings, he pushed them back to Earth and the Chimera, rejoining the Avengers properly.

After detecting an object in the vicinity of Manhattan, Thor joined the Avengers in investigating the matter. After defeating Watchdogs in the area and rescuing captive Inhumans, he took part in the fight with the attacking object and helped retrieve its black box. Returning to the Chimera, Thor and the Avengers learned that Tarleton was now enacting a plan to wipe out all Inhumans with Dark Terrigen mists. Tracing the signal to the San Francisco Quarantine Zone, they agreed to confront and stop his plans.

Along with Iron Man, Thor was tasked to destroy the facility's generators to weaken both its defenses and the signal. During the battle, they learned that Tarleton had lost his sanity and was calling himself MODOK. After destroying the last one, they helped Cap and Hulk provide a distraction for Widow and Kamala. As Rogers made his way to the transmission tower, Thor took on the patrolling Warships with Stark and later protected the other Avengers as they made their way to the facility's excavation site.

As the team assembled to confront MODOK, Thor helped his teammates fight the mad scientist and the assembled AIM forces. After he drew a forcefield to protect himself, he charged up and summoned the Bifrost to break through it. When MODOK drew up the object that had overloaded the Terrigen Reactor, Thor quickly identified it as a Kree Sentry and engaged the machine with Stark. However, they were eventually forced to bow out during the battle, though watched Kamala defeat both it and MODOK.

After returning to the Chimera, Thor assembled with the other Avengers to congratulate Kamala. At Bruce's request, he and the rest of the team left them with some privacy.

Sometime after defeating MODOK, Thor and the Avengers were contacted by Maria Hill, who informed them of Monica's promotion to Scientist Supreme and AIM's recent activities. Vowing to continue the fight against them, he and the other teammate took on the company in further conflicts, leading them to learn of their Hives and cloning technologies. During one conflict, Thor discovered that someone was impersonating him and manipulating a faction of AIM into trying to channel the Bifrost. Knowing that doing so would destroy Midgard, he led the Avengers on the mission and stopped the group. After the fight, Thor discovered that the impersonator was actually Loki. After taking on one of AIM's largest hives and defeating a clone of Rappaccini, Thor decided to let Kamala join the Avengers and assemble with the team to inform her.

While investigating a series of Tachyon Rifts, Thor and the Avengers reunited with Kate Bishop, Hawkeye's protégé and their former member in training. He took part in the search for Barton and its relation to the rifts, eventually retrieving him from an apocalyptical future. Whilst assembling with the team, Thor pushed Clint to reveal what he had learned, leading them to learn about an upcoming invasion by the Kree Empire. When Barton fell unconscious during planning, Thor called for medics to help him.
Superhero Class