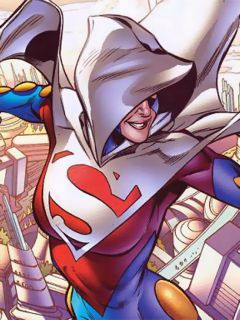 Lucy Lane, like her big sister Lois, grew up an army brat under their father, Sam Lane. Lois was always more of a daredevil and a troublemaker, however. Owing to her being the younger child, Lucy was sometimes more spoiled by her strict father (or at least, he was more inclined to get over her failings).

When she was grown up, Lucy became a flight attendant until a mysterious ailment left her blind. Depressed with her life, Lucy attempted suicide by jumping off a roof in Metropolis, only to be rescued by the first Bizarro. This Bizarro had a chalky white substance that coated his body and coming into contact with it somehow restored Lucy's sight. The Bizarro allowed itself to be destroyed, but in giving Lucy her sight back she got a new appreciation for life.

She later began dating Jimmy Olsen. The two remained together for approximately two years, but parted ways shortly after Superman's first arrival in Metropolis.Once she was kidnapped by the villain Sleez and another time she was seriously injured by Deathstroke.

Lucy later resumed her relationship with Jimmy Olsen, but they eventually broke up after Jimmy quit the Daily Planet to work for WGBS.

While she was still dating Jimmy, Lucy met another Daily Planet reporter, Ron Troupe. Ron was instantly attracted to Lucy, much to his embarrassment (although luckily for him, Jimmy was too thick to pick up on it). After Lucy and Jimmy's breakup, Lucy asked Ron out on a date. Ron later had to call upon Superman to help rescue Lucy from an escaped ape-like creature that had broken out of S.T.A.R. Labs. When Jimmy, on scene filming the rescue makes light of the event (as though it was just good television), Lucy punched him out.

When Lois and Clark finally decided to get married, Lucy was responsible for throwing her sister both the bachelorette party and the bridal shower. Lucy has good intentions, but Lois was a little perturbed when the theme for the bridal shower ended up being "happy homemaker." Lucy was Lois's Maid of Honor (and ironically enough, Jimmy was the Best Man).

After dating Ron for some time, Lucy ended up getting pregnant. She only told Ron after she visited an abortion clinic, getting information about all her alternatives. Ron was opposed to the abortion, and begged Lucy not to rush into anything. Lucy asked Ron not to tell anyone about the pregnancy until she settled on what she was going to do. Ron, nevertheless, ended up telling Jimmy after Ron was fired (along with nearly everyone else) as Lex Luthor bought out the Daily Planet and shut it down. Jimmy then blurted out the news to Lois, who was relieved that Jimmy was not the father.Lucy and Ron decided to keep the baby and planned on getting married. His parents took the news very well -- hers did not. Sam nearly throttled Ron and Elinore insisted that Lucy give up the baby for adoption.

After months of delays and pressure from her family, Lucy Lane and Ron Troupe were finally married in a small ceremony during Lucy's ninth month of pregnancy (Lois and Lucy crashed Ron's bachelor party, hiding in the giant cake). Lois was with Lucy when she gave birth a few weeks later.