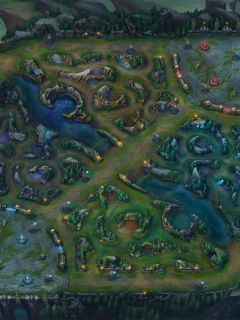 Summoner's Rift is a magical battlefield where matches in the game League of Legends (and Wild Rift) are held. Each team of champions consists of 5 or 3 characters on either the blue or red team. The objective of Summoner's Rift is simple – destroy the enemy nexus. In order to do this, champions must traverse down one of three different paths (or lanes) in order to attack their enemy at their weakest points they can exploit. Both teams have their lanes defended by numerous turrets; each turret grows in strength the closer it gets to its respective nexus and each turret must be eliminated in order to gain access to the next turret in that lane. Cooperating with fellow summoners is an absolute requirement for success, as it is easy for a champion to find themselves ambushed by enemies in the lanes of the Rift. To keep matches competitive, most champions have their powers drastically reduced and abilities are regulated by cooldown times. As the match progresses, more power is returned to the champion by gaining experience (which can be gained in combat). If a champion would be too large to fit in the arena, they are reduced in size to fit, although they will still be larger than their competitors. Traversal options that would allow a champion to escape the arena are disabled and abilities like flight are reduced to levitation and the like. If a champion is killed, they are respawned inside their base after an ever increasing amount of time. The space between the lanes (also known as the jungle) are inhabited by neutral monsters that range from wolves to Baron Nashor himself.

No connections to Summoner's Rift found.