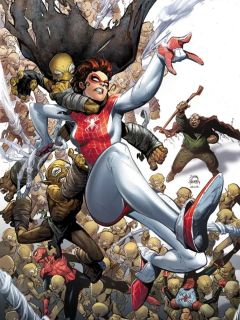 After the Multiverse was destroyed by incursions, and recreated in the form of Battleworld, MJ and her family found themselves in a domain known as the Regency, fashioned from the remnants of Earth-18119 by the iron will of God Emperor Doom.

She and her daughter, Annie, were attacked by Venom in their home. Though she was able to convince her husband, Peter, to kill the villain to protect their daughter.

As Annie grew up, she developed spider-powers of her own. Mary Jane would become very fearful of her daughter's liberal use of her powers, and when Peter made his return as Spider-Man, she convinced her husband not to leave Regency, but to hide in the shadows using his black suit.

When Kraven the Hunter realized Spider-Man was fighting like a scared father, Regent called in all families connected to Public School 122 Mamie Fay for a power screening. Despite her family passing, a fellow classmate of Annie's, Lewis, was outed as a Mutant. With Peter abandoning them to save Lewis, Mysterio was able to locate Mary Jane and her daughter. Luckily; however, S.H.I.E.L.D. found them first.

As Mary Jane acquainted herself with the S.H.I.E.L.D. agents, she quickly became annoyed with their lack of urgency to rescue her husband, and the idea of no longer having a life; however, her outlook rapidly changed as Annie made quick work of the invading Sinister Six. This convinced her to leave with the Avengers to rescue Peter themselves rather than run to safety.

While the Avengers tried and failed to neutralize the Regent, Annie decided to help her father, and struck the villain with an Inhibitor Chip-infused Trick Arrow obtained from Hawkeye; however, even with his powers neutralized, the Regent was still a threat. Peter, Annie, and MJ teamed up to beat him up, but the Regent got hold of Annie. Spider-Man bluffed his way next to the Regent, and made a joke that caused the villain to laugh and be distracted long enough for Peter to strike a finishing blow that knocked him out. The Avengers then proceeded to take the Regent into custody using an improvised restraining unit created by the Prowler.

Brawl in the Family

After taking down Regent, Peter reversed engineered Dr. Shannon Stillwell's Empire Unlimited Test Suit to mimic his own spider-powers for his wife, since Annie was increasingly engaging in super-heroics and needed someone to keep an eye on her.

Meanwhile, MJ had opened a boutique in SoHo which drew the attention of a prominent fashion critic. She went to the diner next door to celebrate the development only to learn that Spider-Man was involved in an incident at the former site of Empire Unlimited Headquarters.

Donning her new costume, MJ went to assist Spider-Man in a fight against the Mole Man's forces. There she rescued her daughter from the Moloids and agreed with Peter that Annie should stay back.

Peter then informed her that there was something wrong with the Regent tech MJ was utilizing to mimic his powers. While they were talking, the ground gave way and the pair fell down into Subterranea. Waking they found Mole Man plotting to use some of Regent's tech for himself. When asked who she was, MJ claimed she was Spinneret and that she was angry.

In order to avoid the constant power drain her suit exerted on her husband, Spinneret accepted a biotechnological suit provided by Liz Allan. In reality, the suit was the Venom Symbiote that Allan Biotech had somehow acquired. Eventually, the suit assumed control over her and tried to kill Spider-Man to exact vengeance on him for killing Eddie Brock years earlier, but MJ faced the symbiote in a mental incursion, and, with Peter's help, she suppressed its hold over her, bringing it totally under her sway.

Her bond with the suit had left her vulnerable to the Poisons, an extra-dimensional life form that needed to bond with a symbiote, feeding off its host's nutrients to complete the bonding process. Because of this, Venomized versions of Captain America and Doctor Strange recruited her to help them defeat the Poisons while she was in a medical appointment. Despite being there to help, she and an alternate version of Spider-Man that kept the Venom symbiote had conflicts with the Eddie Brock from the Prime Marvel Universe because of everything that their own versions of Eddie Brock did to them, judging he was likely no different from them.[11] In the end, they were able to stop the Poisons by causing their ship to explode moments after Doctor Strange returned she and the other Venoms to their proper realities.
Superhero Class