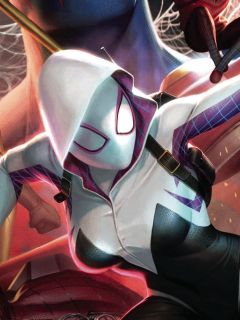 Gwen Stacy was born in Forest Hills to George and Helen Stacy. Following her mother's death, she was raised by George alone. Gwen's free spirit and artistic inclinations often put her at odds with the type of ethics her father worked to instill. As a result of this contrast with his father, Gwen would often retreat into quiet seclusion and play the drums.

Over time, she developed a friendship with her neighbor and fellow introvert Peter Parker, sharing their love for music. At Midtown High School, Gwen developed relationships with other students, a group of girls with whom she formed the band The Mary Janes, and rebelious affluent student Harry Osborn.

After being bitten by a radioactive spider, Gwen was granted arachnid-like super-powers, and started a career as a crimefighter, dubbed by the media as "Spider-Woman." She was given a costume and a set of Web-Shooters by retired crimefighter Janet van Dyne. Gwen spent most of his early adventures focused on exploiting and mantaining her newfound attention more than helping those in need. However, Gwen's behavior changed after his father expressed he believed Spider-Woman could easily help people.

Spider-Woman's influence also caused one of the biggest tragedies in Gwen's life. The bullied Peter Parker, desperate for becoming special like his idol Spider-Woman, conducted an experiment that turned him into a Lizard-like creature. Parker crashed the Midtown Senior Prom, and Gwen was forced to fight him. In the aftermath of the battle, Peter returned to his human form, but died due to his injuries. With no evidence or link to his transformation, Spider-Woman was blamed for Peter's death and branded a criminal.

In an effort to clear her name and haunted by Peter's death, Gwen doubled her efforts to fight crime. Additionally, Gwen's father George was tasked with conducting the NYPD investigation to capture Spider-Woman. This drew the attention of Matt Murdock, the right hand to New York's Kingpin of crime, who sent hitman Aleksei Sytsevich to kill George in an attempt to make an ally of Spider-Woman. After thrawrting the murder attempt, Gwen found herself held at gunpoint by her father, and she was forced to reveal her double identity. She pled her innocence, and swore to never rest until criminals like the Kingpin were stopped. Captain Stacy chose his daughter over his duty and let Spider-Woman free.

Gwen was one of the first spider-totems to join Spider UK's Spider-Army in order to combat the Inheritors during the Great Hunt.

She was sent to Earth-21205 to recruit the spider-totem of that reality, a Peter Parker who was driven to madness and grief caused by the death of the Gwen of that reality and became the Goblin. However, that Peter was killed by Verna and her Hounds. Angered, Gwen swore vengeance and warped away from that reality.

Spider-Woman was later present during the final fight agains the Inheritors, during which the villians were finally defeated and dealt with.

Return to her universe

Gwen later returned to her reality, where she still tried to turn the public opinion against her by becoming a vigilante. With the appearance of a new villain named the Vulture, Gwen set out to catch him and deliver him to the police, in order to gain their trust