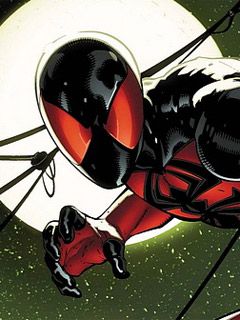 Kaine possesses various superhuman attributes as a result of his unique physiology. As a clone of Spider-Man, Kaine began his life with powers identical to Spider-Man's though some of these powers were altered as a result of Kaine undergoing cellular degeneration, although once he was cured of his tarantula mutation and of his cellular degeneration, his powers have been reduced to around Peter Parker's strength.

Like Peter Parker, Kaine possesses superhuman strength. Initially, his strength was equal to Spider-Man's and he could lift approximately ten tons. Over time, however, Kaine's physical strength has dramatically increased to the point of now being able to lift up to 25 tons. He has proven to be able to beat the Rhino unconscious and hold his own against Peter Parker, Ben Reilly, and Spidercide at the same time.

Kaine is capable of running and moving at speeds that are beyond the natural physical limits of the finest human athlete.

Kaine's augmented musculature is much more efficient than that of a normal human being. As a result, his muscles produce lesser amounts of fatigue toxins during physical activity than do those of ordinary humans. He can exert himself physically at peak capacity for at least several hours before the build up of fatigue toxins in his blood begins to impair him.

Kaine's body is tougher and more resistant to some types of physical injury than that of a normal human. Kaine's bodily tissues are resistant to powerful impact or blunt force trauma. He can withstand impacts, such as falling from several stories, being repeatedly struck with superhuman force or by several powerful energy blasts, that would severely injure or kill a normal human with little to no injury himself.

Kaine's agility, balance and bodily coordination are enhanced to levels beyond the natural physical limits of the finest human athlete. In spite of his increased size and mass, Kaine is still just as agile as Spider-Man.

Kaine's reflexes are similarly enhanced and are more efficient than those of an ordinary human by a factor of fifteen.

Kaine is also able to stick to virtually any surface and crawl across it just as Spider-Man is capable of. His mental control over this ability has been increased to such a degree, he can rip a wall down just by tugging at it hard enough with his palms.

This same attribute has also resulted in deformity in his hands. He can channel this same energy endothermically through his hands and leave a severe burn mark on a person by making skin to skin contact with them. He typically leaves this mark across a person's face, though it is presumed he can do the same to other parts of the body.

Kaine has two retractable claws on the back of each hand that are similar in overall appearance to the natural bone claws of the mutant Wolverine. The exact composition of Kaine's claws are not known but they are extremely sharp. Combined with his great strength, Kaine is able to cut most conventional materials up to and including some forms of metal.

Apparently Kaine's spider-sense is improved, creating a psychic alignment with his environment, specifically a more empathic and sympathetic relationship with spiders and insects. While connected to the varying populations of spiders he was unable to communicate with them directly or command them.

Kaine has the ability to organically produce his own silk webbing from glands within his forearms, limited by his body's health and nutrition.

Like Spider-Man, Kaine possesses a kind of early warning system that allows him to sense potential danger or potential attack within his vicinity. Kaine's "spider-sense" is even more developed than Spider-Man's, giving him a limited degree of actual precognition.