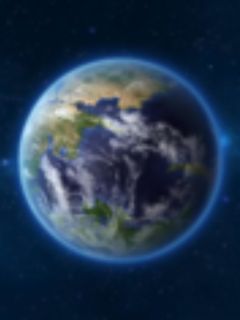 The following chronology takes place after "Those who Lead the Way Ahead" short story. New Divine Era (Year 2100) The divinity "Gyze" was defeated. As such the "Zeroth Dragons" reverted into Cray Elementals and returned to Cray. The divinity "Messiah" having served its role, returns to the source of all divinities, "Cray's Idea". At this time, the "Messiah" foresaw a future of despair to come and left upon the "Wandering Star Brandt" the "Messiah's Epitaph" that described its will. Godless Era (Year 2500 to 3500) The Power of Destiny that continued to gathered on Cray would attract its greatest enemy, the "Void", which it would not be able to be fended off in Cray's current state. The source of all deities, the will-less divinity "Cray's Idea", ceases function in order to hide away from the "Void". The Power of Destiny had dissipated to the point that even the contents of the "Akashic Book" were blank, the beginnings of an era without divine blessings. This era would later be referred to as the "Godless" or "Prayerless era". Following the warning of the "Messiah's Epitaph", "Dimension Police", "Nova Grappler" and "Link Joker" agreed on the role they must play. Changing the name of their nation to "Brandt Gate", they continue to eliminate hostile entities at the boundaries of the world, throughout the Godless Era even without the divine blessings of the world. Due to the loss of the "Deities", the "Keter Engine", which served as the foundation of prosperity in the "United Sanctuary" since its construction during the nation's founding, had come to a halt. Natural disasters, mismanagement, man-made disasters, civil war... After these various periods of strife, the Burton royal family that represented the nation and had produced the Great Hero "Alfred", fell into decline. As such the turmoil of the "United Sanctuary", that had supported justice/trade/health care, spread throughout the world. An era where the common enemy "Gyze" and the symbol of harmony "Messiah" were lost. Plunging into a long period of turmoil in which the inhabitants of "Cray" were against each other. The "United Sanctuary" splits at the end of its civil war. Due to the loss of divine blessings and over 300 years of warring, the land now at its very limits is desolate. The surviving residents built the floating islands "Ketergia", powered by the "Keter Engine" although it still could not be used to see the future. Residents (Celestial People) of "Ketergia" refused to be involved with other nations, establishing a new nation "Keter Sanctuary". Food production had dropped sharply due to the loss of divine blessings. Even the clan "Neo Nectar" could no longer sustain provisions for its own people. The huge campus "Great Nature" continually shrinks, and the historic nation "Zoo" is divided into a group of self-sufficient smaller nations. Nevertheless, there were still some who would spend their lives pursuing knowledge. One such individual being the Sage "Stoicheia", who arrived at the truth of the "Prayerless Era". "Stoicheia" creates an intelligent treasure "Wise Cube" that measures the divine blessings throughout "Cray". After the death of the Sage "Stoicheia", those who followed their teachings gather under the "Wise Cube" to establish the nation "Stoicheia". Eventually, the clans belonging to the former nation "Zoo" and the majority of former nation "Magallanica's" clans came together, leading to the birth of an enormous nation. Due to the drastic decrease in magical power, each of the clans in "Dark Zone" also lost their power and divided into many smaller nations. The ones that lost the most power were "Gear Chronicle". Severed off from the dimensions, became impossible to move beyond the Godless Era to the past or the future. The Zodiac Time Beasts fell into slumber and entrusted their power to a single hero. This lone hero sensed a faint light of the future. The hero, who found the potential in "Dragon Empire", founded the nation "Dark States" and continues to cooperate with those who protect the light of the future. Then there is the oldest nation "Dragon Empire" where the oldest race "Dragon" gathers. There, shrine maidens have been praying since ancient times. The girls keep praying. When their prayers go through, the sleeping egg will hatch. It is said that the future will hatch from the egg. Godless Era (Year 4500) Chakrabarthi Divine Era (Year 5000) Prayers of the maidens reaches the "Earth", and the divinity "Chakrabarthi Divine Dragon" hatches from its egg.

No connections to Planet Cray found.