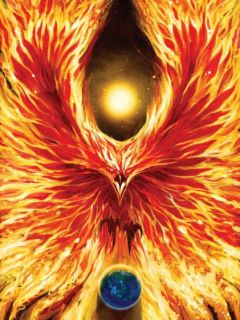 The Phoenix Force is one of the oldest known cosmic entities, representing life that has not yet been born, as well as the forces of creation and destruction. The Phoenix Force is an immortal, indestructible, and mutable manifestation of the prime universal force of life. Born of the void between states of being, the Phoenix Force is a child of the universe. It is the nexus of all psionic energy which does, has, and ever will exist in all realities of the Omniverse, the Guardian of Creation, and a de-facto guardian of the M'kraan Crystal. The Phoenix is among the most feared beings in the entire universe - having the power to cut and regrow any part of the universe, as well as destroy it entirely, which is part of the Phoenix's purpose: "The Judgement of the Phoenix": to burn away what doesn't work. Recent interventions of the Phoenix suggest that "what doesn't work" is what has become stagnant instead of naturally evolving

A billion years ago, the alien Demon Lords of Stasis weaved a spell that had halted evolution on their planet. The Phoenix intervened, bonding with one of the aliens of that world and breaking the spell, and purging the world. The Phoenix Host had five "Lights", disciples of sorts that helped the host control the infinite power of the Phoenix.

During its time as a sentient entity, it traveled the cosmos just like other cosmic beings. At first, the Phoenix Force was a formless mass of energy, but a long time ago, it came to Earth and met a magician named Feron, who worshiped the legendary Phoenix, and whose daydream-like visions prompted the entity to adopt the firebird form it has today. Feron asked the Phoenix to help him by lending its energy to project a stone pillar, which resembled a lighthouse, across the Multiverse. In Earth-616 the pillar became the lighthouse base for the British superteam, Excalibur, a team its future host Rachel Summers herself would join. It also had an early human host a million years ago that helped the Stone Age Avengers defeat an out-of-control Celestial they called the Fallen.

The Phoenix Force came to be worshiped by the Shi'ar as Phal'kon, the "sister" of their other gods K'ythri and Sharra; and claimed the warrior Rook'shir as a host. However, he became the first known host to succumb to its destructive impulses and go insane from the power it embodied, becoming the malevolent force of destruction known as the Dark Phoenix. Rook'shir's rampage led to the Phoenix Force being feared and demonized by the Shi'ar Empire, who went to extreme lengths to exterminate all bloodlines deemed compatible with the cosmic entity.

At some point in Earth's early Middle Ages, the Phoenix Force chose a Viking woman as its avatar and became a member of a team of Avengers that consisted of Thor Odinson, Chief Hellhawk the Ghost Rider, Nehanda the Black Panther, Bodolf the Black, an Atlantean princess bearing the Iron Fist, and Tanaraq.

At some point in the late fifteenth or early sixteenth century, the Yu-Ti of K'un-Lun had visions of the Phoenix coming to Earth, and of a red-headed Iron Fist who would confront it. In one vision, she lost control and destroyed the world. In another, she tamed its power. When walking the streets, Yu-Ti came across Fongji Wu, the daughter of a woman who had ventured to the outside world and lain with a man from beyond K'un-Lun. After defeating Shou-Lao and becoming the Iron Fist, Fongji confronted the Phoenix Force and became its host. The Phoenix Force attempted to overwhelm Fongji and turn her into a Dark Phoenix, but she managed to maintain control of it. Determining that she needed to leave Earth in order to prevent the possibility of losing control from coming to pass, Fongji ventured off into space, never to be seen again.

The Phoenix Force was called back to Earth when it felt the mind of a human transcend the physical realm, a mind that resonated with the Phoenix's energy. A young Jean Grey had telepathically linked her mind to her dying friend, Annie Richardson, to keep Annie's soul from moving to the afterlife. In doing so, Jean's mind was being dragged along to the "other side" with Annie. Phoenix lent its energy to break the connection and kept close watch on young Jean, as it felt a kinship with the young mutant.

Years later when Jean was dying on a space shuttle, her mind called out for help and the Phoenix Force answered and saved her. The craft's pilot had to sit in an area without enough shielding to protect him or her from the lethal radiation. Marvel Girl volunteered to pilot, but, while guiding the shuttle to Earth, the solar radiation finally proved to be too great for her to hold back any longer with her powers and she began to succumb to the radiation's lethal effects. The Phoenix Force responded to Jean's anguish and telepathic calls for help, as she was dying aboard the space shuttle. It appeared before her, shaping its form and consciousness after Jean's own.The Phoenix Force told her that she was dying, but that, by taking the Phoenix Force's hand, she would gain her "heart's desire". What Jean most wanted was to save the lives of the X-Men and herself. Jean held onto the Phoenix Force's arm and fell into a coma-like state. Simultaneously, the Phoenix Force fully took on the form, memories, and personality of Jean Grey, by absorbing a portion of her consciousness. The Phoenix Force used its powers to ensure the survival of the X-Men, in their return to Earth and crash landing in Jamaica Bay, off New York City. It was also responsible for casting Jean into a coma-like state and placing her within a cocoon-like construction, which rested for years at the bottom of Jamaica Bay, while her injuries healed completely. Thus, the Phoenix Force fulfilled its pledge to Jean. The cosmic Phoenix Force entity, which had created a duplicate body of Jean and absorbed a piece of Jean's consciousness, acted in her place while Jean's body lay in suspended animation in the bay.

Following the crash landing in Jamaica Bay, the Phoenix Force took Jean's place, as a member of the X-Men. Emerging from the hospital, the Phoenix battled Firelord and provided the power to transport the X-Men to the M'Kraan Cystal's home-world, where they battled the Shi'ar Imperial Guard. During this time, the Phoenix scanned the human member and leader of the Starjammers to learn it was Cyclops' long thought dead father, Christopher Summers. Using Storm and Corsair's life forces, the Phoenix Force healed the M'Kraan Crystal. After the recent events, Phoenix decided to have a party at her apartment she shared with Misty Knight, and the X-Men briefly battled Iron Fist, until Jean explained he was one of Misty's best friends. After the team was attacked, by Warhawk,[Phoenix decided to rejoin and was later controlled by Mesmero to perform in a circus, until Beast rescued them, only to battle Magneto and his robot Nanny after. The Phoenix and the Beast ended up separated from the other X-Men, each group mistakenly believing the other to have died.

At this time, Mastermind began entering the Phoenix' mind and had her question her sanity. After being studied at the Mutant Research Center on Muir Island, by Dr. Moira MacTaggert, it was assessed that the Phoenix entity would become too strong to control, but the other X-Men had no way to know what was happening and little chance of preventing a tragedy. However, the portion of Jean's personality the Phoenix had taken on subconsciously created a series of psionic mental blocks to reduce the level of power she could command at one time, so as not to be overwhelmed by it. After battling Proteus, Phoenix was reunited with Scott Summers. After battling the Hellfire Club Knights and the White Queen, while attempting to recruit new mutants Alison Blaire and Kitty Pryde, Kittyâ??s parents were about to withdraw their daughter from the school, when Phoenix altered their thoughts. A very questionable move. After battling the Hellfire Club, over recruitment of Dazzler, Phoenix and Scott shared an intimate night, after Phoenix blocked Scott's optic blast and allowed him to see her clearly.

With the new experience of a cosmic entity dealing with human emotions, Phoenix was thus an easy target for the illusionist, Mastermind,[36] who needed a trophy to join the Inner Circle of the prestigious (and infamous) Hellfire Club. With the help of a psionic device, created by the club's White Queen, Emma Frost, Mastermind made Phoenix believe that she was his 18th-century lover, Lady Grey. Phoenix joined the club as their Black Queen, which would allow her to relish the extremes of human emotion and sensuality. When the X-Men came to her rescue, Jean's true love, Cyclops, faced Mastermind in a psychic duel and was defeated. Cyclops' "death" broke Mastermind's hold over Phoenix's psyche--as well as any control Jean's psyche had had over the Phoenix. It brushed aside the X-Men and departed for the heavens.

To sate its hunger, the Dark Phoenix flew to a distant galaxy and devoured the star of the D'bari system.The resulting nova killed billions of innocent people and a Shi'ar vessel attacked it. The Shi'ar Empress, Lilandra Neramani, was alerted before the vessel was destroyed and called a council of her intergalactic counterparts, including the Kree and Skrull Empires. They concluded that, for the rest of the universe to live, Dark Phoenix must die.

Meanwhile, the Beast had found a way to neutralize Phoenix's immense power, temporarily. When Dark Phoenix returned to Earth, the X-Men held it at bay, while Professor X rebuilt the mental blocks in Phoenix's mind, that Mastermind had broken down. Scott, then, proposed to the Phoenix. At that moment, the Shi'ar arrived and teleported everyone aboard their flagship. Lilandra announced that Phoenix, who everyone believed to be Jean, would have to die. Professor X, unwilling to give up on one of his pupils, but romantically involved with Lilandra, challenged her to Arin'n Haelar, a Shi'ar duel of honor that cannot be refused. Professor X named the X-Men as his champions in the duel, while Lilandra chose her Imperial Guard.

The duel took place the next day, in the Blue Area of the Moon. The Imperial Guard made short work of the X-Men, leaving Cyclops and Phoenix to make a final stand. A stray bolt hit Cyclops and Jean's control broke and Phoenix became the Dark Phoenix again. Lilandra ordered Plan Omega, which would destroy the whole solar system, in hopes of eliminating Dark Phoenix as well. Professor X ordered the X-Men to subdue Phoenix, so that Plan Omega would not be necessary, and they managed to subdue the Phoenix, for a brief time. In that moment of lucidity, Phoenix fled into a back alley, with Cyclops in pursuit. Phoenix subdued him, with her telekinesis, and told him that she was losing control of herself and that there was only one way to prevent the Dark Phoenix from taking dominance over her again. Unbeknownst to Cyclops, as Phoenix was talking to him, she was using her powers to activate an ancient Kree energy weapon behind her. Phoenix then bade Cyclops an emotional farewell and triggered the weapon, which atomized her on the spot.
Superhero Class