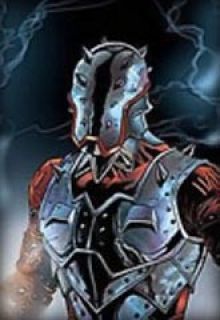 Robbie Baldwin is the son of Justin Baldwin, District Attorney of Springdale, Connecticut, and Maddy Naylor-Baldwin, a popular actress. His parents held very opposite views and often argued in front of Robbie, a fact made more poignant as their arguments often had to do with what Robbie should be doing with his life and future career.

As a high school student, Robbie was interning at the Hammond Research Laboratory in Connecticut. There, Doctor Benson and two colleagues began the final stages of their attempts to tap an extra-dimensional energy source, but the researchers did not construct adequate safeguards and the energies began to overload Hammond Labs' equipment. Part of the energies fed back into the generator, shorting out the entire system. Unfortunately, Robbie had sneaked into the lab where the experiment was taking place, curious as to what all the hush-hush preparations had been for. Robbie was bombarded by energy from the dimension but survived, finding himself surrounded by weird energy bubbles, clad in an odd costume, and having a hollow and resonant voice. Panicking, Robbie sought to escape to the roof of the lab building where he encountered four masked gunmen. During the ensuing battle, Robbie discovered that his body now generated a kinetic energy field that protected him from any impact and made him a bouncing dynamo of kinetic energy.

Shortly afterward, Robbie's parents were accosted by Johnny Roarke, a criminal Justin Baldwin had put away, and Robbie used his powers to defeat him. The media leaped to the story, reporting the appearance of a new hero, whom they dubbed "the Masked Marvel." Robbie continued to use his powers to fight crime, and the Masked Marvel enjoyed a great deal of popularity from the townspeople, although his parents held very diametrical and vocal views about the costumed vigilante. Baldwin was forced to keep his power under control, avoiding any potential contact that might trigger his powers. He also spent much of his time trying capture Dr. Benson's cat, Niels, who was similarly caught in the energy experiment and gained Speedball-like powers, and using him to help understand his powers.

During a trip to New York City, Robbie ended up helping Spider-Man and Daredevil stop the Purifiers of the High Evolutionary, but mostly Robbie fought criminals in Springdale, such as the Sticker, Leaper Logan, the Bug-Eyed Voice, and the Feathered Felon. Robbie hoped to become a big-time superhero, and even joined a tryout for the premier hero team Avengers, only to be rejected. During a shopping trip to New York City with his mother he saw a battle breaking out involving Terrax, former herald of Galactus. Joining the fray along with the other heroes that would subsequently become the founding members of the New Warriors, Robbie agreed to join the team as well after Terrax was defeated.

Despite the long distance he often had to travel, Robbie stayed with the New Warriors for a long tenure, quickly becoming an annoying but loveable kid brother to the older Warriors and continuing to grow in the development of his powers. Shortly after joining the team, he asked his teammates to join him in investigating the long absence of his mother, who had joined a fanatical ecological watchdog group, Project: Earth. The Warriors discovered the group wanted to kill Baldwin's mother, as her celebrity would serve to make her a martyr to their cause. Robbie helped save his mother and defeat Project: Earth, and in so doing he revealed his secret identity to her. Although shaken, she supported her son's lifestyle as a superhero.

Speedball had battled numerous villains with the New Warriors, including Terrax, the Sphinx, the Puppet Master, Gideon, Force of Nature, Psionex, and the Folding Circle. At one point, the cosmic villain Magus created evil doppelgangers of Earth's heroes, and Robbie's duplicate used its powers to virtually destroy the town of Springdale. It also confronted Robbie's parents, and Robbie was forced to kill his duplicate. This led to his father discovering his secret identity, and Justin Baldwin denounced his son because of what he saw as vigilantism.

Robbie?s parents got divorced, and Robbie chose to live with his mom in New York. This allowed him to develop deeper relationships with his teammates, notably Nova, Rage, and, perhaps more reluctantly, his neighbor Carlton LaFroyge (who used the knowledge of Robbie?s identity to force his way onto the team as Hindsight Lad.)

When Timeslip joined the Warriors, telling of her visions of Speedball?s death, she and Robbie nevertheless developed the beginnings of a romantic friendship while seeking the truth behind these visions. At the same time, despite Speedball?s ever-increasing control over his powers, Robbie began experiencing severe spikes in his power levels that wreaked havoc over his immediate area. The Warriors were confronted by the Sphinx, who claimed the presence of Speedball was creating chaos with time itself. They were also confronted with the evil techno-organic being Advent. The Sphinx succeeded in killing Speedball before escaping, and Advent left for the future. Timeslip, holding Speedball when he died, received memories from him in his dying moments-- memories of a citizen from the future named Darrion Grobe. Grobe, the son of the man who would become Advent, hoped to undo the meddling his father had done by traveling through the kinetic dimension to the past. He used futuristic technology to become a duplicate Robbie Baldwin/Speedball, replacing Speedball when he was trapped in the kinetic dimension by the Sphinx several months before. Timeslip used her knowledge and powers to transport the New Warriors to the future. There, a holographic persona of Darrion helped the Warriors to undo all of Advent's manipulations. Ultimately, the team had to enter the kinetic dimension to escape the future before it became re-made, and they brought back the true Speedball while returning home.

Robbie has always been a New Warrior at heart. Even when the team seemed to be on a long hiatus, he and Nova helped re-form the Warriors to defeat Blastaar, adding new members Aegis and Bolt. Robbie and Nova even tried to pitch the New Warriors as an animated series, but they were forced to flee when they saw the producers? unique take on the team. Nevertheless, Speedball returned when the New Warriors were led by Night Thrasher into a unique re-branding as a reality-TV show. Robbie?s bouncy personality seemed a perfect fit despite the contentions of other teammates, and the team hit the road to become heroes for the common man throughout small-town America. Recently the New Warriors encountered Nitro, Speedfreek, Cobalt Man, and Coldheart and during the battle that followed Nitro used his power and caused a massive explosion killing the New Warriors and almost everyone around that area for an unknown distance. Speedball was seemingly killed during this explosion and was later ridiculed by TV talk show hosts.

Speedball was later found alive (albeit barely), his powers apparently burned out. The media and the authorities made him the scapegoat for the Stamford disaster, which had sparked widespread anti-superhero sentiment and prompted the passing of a law requiring superheroes to register with the authorities. The government decided to make an example of Robbie, holding him without bail or trial while he was abused repeatedly by both guards and fellow inmates. His secret identity leaked to the press, hated by the public, disowned by his parents after he refused to admit to any wrongdoing, Robbie was offered a deal: he would be released if he became a government-registered super-hero, helping train other super-agents and hunting down unauthorized super-heroes. Robbie turned down the deal repeatedly on principle and was later shot by vigilante Mr. Stricker, whose daughter had died at Stamford.

Narrowly surviving, Robbie soon discovered that he still had energy powers, but they were now fueled by his own physical pain, such as the near-constant pain of the bullet fragments lodged in his spine. Perhaps somewhat unhinged by this situation, and increasingly haunted by guilt regarding his role in the Stamford disaster, Robbie agreed to register after foiling a jailbreak by several super-criminals, asking only that Stricker be pardoned in exchange for his registration. No longer caring about anything except making himself suffer, Robbie also agreed to become a hero-hunting government super-agent. He did so in

his new guise as Penance, wearing an armored costume whose spikes constantly pierce his own flesh, augmenting both his pain and his power.
Superhero Class