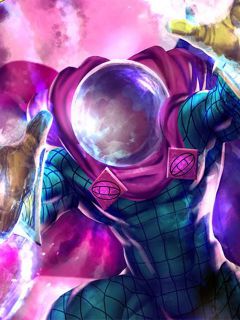 Quentin Beck found his calling when his uncle gave him an old movie camera. Despite his widowed father making fun of him, he grew up to become a successful stunt man and special effects designer in Hollywood. That changed when he became frustrated and felt he wasn't getting the recognition he deserved. First he teamed up with the Tinkerer to steal industrial and military plans, with Beck donning an alien costume to throw potential snoopers off the track and leading a group of supposed extraterrestrials. Later, an article in the Daily Bugle gave Beck the idea of pretending to be Spider-Man and framing him for crimes, then becoming a hero and bringing Spider-Man to justice. Beck studied Spider-Man for weeks and was able to duplicate his powers, apart from spider-sense, mechanically. After a few robberies posing as the web-slinger, which added more grist to the mill for J. Jonah Jameson's vendetta, Beck, as Mysterio, trounced an unsuspecting Spider-Man. When they next met, Beck fought and apparently beat Spider-Man, then boasted how he had achieved it all. Spider-Man taped the confession and cleared his name. Despite the clever gadgetry Beck built in to the Mysterio costume, Spider-Man managed to defeat him.

Beck next joined up with Doctor Octopus when he formed the Sinister Six but the group had no better luck in defeating Spider-Man. Then Beck posed as Doctor Ludwig Rinehart, a psychiatrist visiting from Europe. Using illusions, Beck convinced Spider-Man that he was going mad and could only be cured if he revealed his secret identity. As Spider-Man was about to do just that, Jonah Jameson and Flash Thompson burst in, Jonah having been told that Rinehart was a fraud. This unexpected arrival spoiled Mysterio's scheme and Beck was soon returned to prison. Now unemployed, and with a criminal record, Beck planned a way to take revenge against Spider-Man and Jameson by staging a car crash where Spider-Man was the cause, and Jameson supposedly died. In reality, the "body" was an automaton, and the real Jameson was placed in a special-effects version of Hell. Emboldened by the seeming success of his plan, Beck found the courage to call a childhood friend, Betsy Schneider, and they started dating. After Spider-Man rescued Jameson, Betsy admiringly told Beck that they could make lots of money off his story. Beck became enraged, certain she was only using him. Later, he proposed marriage to Betsy, but she had changed her mind about him.

In yet another plan of revenge, Beck teamed up with the Wizard against Spider-Man and the Human Torch; after that failed, he bided his time in jail until he was able to escape. He then devised a series of elaborate traps in an abandoned amusement park, convincing Spider-Man that he was only six inches high. Back in prison, Beck had an epiphany of sorts; he realized that master criminals spent more time avoiding capture and battling foes than they did accumulating wealth and gaining power. He devised a quiet, long-term plan, a nursing home scam whereby he would trick the infirm into signing all their wealth over to him. To this end, he made use of his cellmate, Daniel Berkhart, taking him into his confidence, teaching him all his secrets and training him to replace him as Mysterio, even as he engineered his own "death". Berkhart was released and he confronted Spider-Man, but was defeated eventually.

Later, Beck assumed the identity of Doctor Rinehart and ran his scam at the Restwell Nursing Home on Long Island. He amassed eight million dollars in three years but ran afoul of the Burglar who had killed Peter's Uncle Ben. The Burglar had broken into the Parker home years before in search of a treasure hidden in the 1930s by the gangster Dutch Mallone and now sought more information from Aunt May who was a resident of the nursing home. The Burglar held "Rinehart" prisoner, inducing the "Doctor" to help. Beck figured he could dispose of the Burglar once he learned the treasure's location so he faked May's death from a heart attack to allow the Burglar to take her from the nursing home without Peter knowing. Spider-Man, however, recognized Beck and confronted him after battling numerous illusions. Eventually, Beck escaped to work on other, safer scams, among them a scheme to undermine Spider-Man's confidence by making him the cause of an innocent bystanders death.

These plans failed and Beck rejoined the Sinister Six but bailed out when he realized that Dr. Octopus was using the group for his own ends. Later, the other five met, intending to get revenge on Dr. Octopus but Octavius anticipated such an attack and instead had another proposition for them involving the appropriation of Hydra's satellite control station. The others reluctantly accepted, though Beck secretly planned to take over once they had obtained their goal. During a heated battle with a number of different heroes, Beck made his play, causing the heroes to fight each other, but he was knocked unconscious by Deathlok, who literally saw through the illusions.

Now unhinged, possibly due to exposure to his own hallucinogenic mist, Beck posed as Mr. Gerde, Dr. Octopus's attorney (after the multi-armed criminal's apparent death) and forged a videotaped will, that used Octavius's relative Elias Hargrove as a pawn along with the remainder of the Sinister Six. Using misdirection and Spider-Man, Beck stole a data disk containing details on underground figures. He needed Hargrove to get the right code, but Hargrove had worked out that the tape was a fake. Before he could coerce Hargrove, the Scarlet Spider stopped Beck. Beck undid the booby-trapped data disk, but the Scarlet Spider managed to escape with Hargrove just before the building exploded, with Beck apparently caught in the blast.

In a new scheme, Beck assumed the identity of Rudolph Hines and set up a new network, "Mystery Vision", which sent addictive subliminal signals to viewers mesmerized in front of their TVs. With ratings soaring, Beck also plotted to use an unsuspecting Spider-Man (Ben Reilly) as part of his programming. He tricked Spider-Man into wearing receivers, but when Ben realized what was happening he was able to trace the source of the transmissions and put the transmitter out of action. With no special signal, the networks ratings plummeted, and Beck's fame was over. While in prison after another failed union with the Sinister Six, he learned he was dying as a result of prolonged exposure to his special effects chemicals. On release he planned his swan song. But the Spider-Man was not the one he knew, so he decided to destroy Daredevil instead. Buying information from the Kingpin, he proceeded to drive Daredevil insane, both with drugs and by harming or killing those close to him. Beck's final attempt to goad Daredevil into killing him failed, and he committed suicide by shooting himself in the head. Even after death Beck’s soul didn’t get to rest. His soul was sent to hell for his evil doings and resided there till the Pitiful One gave him a chance to go back, although he was later sent back by Dead Girl and Doctor Strange. Recently Quentin was again seen in the living world when the new Mysterio (Francis Klum) appeared. He had bought Beck’s old costume and attacked the school where Peter Parker had been working. After Francis had secured the school by surrounding it with knockout gas and ranting how great he was, Beck made his entrance and lectured Francis how he wasn't ready to fill his shoes. Francis acted fast and tried to teleport himself inside Beck’s body, but Beck transformed himself to reddish hell flames and burned Francis slightly. Francis didn’t believe that he was Beck and accused him of being Daniel Berkhart, but Beck informed him that Daniel arrived just moments ago. He also revealed that he and his associates were interested in how Klum's fight against Spider-Man and Daniel would go before vanishing in a puff of smoke. Soon Spider-Man and Daniel arrived and fight ensued with three of them. Meanwhile Beck sought out Miss Arrow, the school's new nurse. She didn’t believe that he was Beck so he took off his helmet, and showed her that half of his face was missing. He revealed to Miss Arrow that he was hired by certain individuals to serve their needs and told her that she, him and Spider-Man are just pieces in a game that is taking stage in cosmic proportions. Before he left he convinced Miss Arrow to convince Peter to stay working in the school.