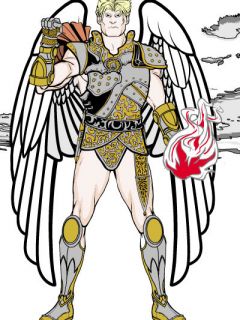 Being the oldest and most powerful of the archangels, Michael is one of the most powerful beings in existence in the universe, possessing incalculable power that surpasses his siblings, including the other archangels, even Lucifer. Michael has absolute control over the physical universe and can easily destroy heaven, hell, limbo, the regular universe, alternate universes and the whole multiverse in an instant, 10 times over with ease.

As the strongest archangel, Michael can easily overpower other angels, deities (other than God himself), humans, creatures, and even Lucifer himself, with his might. He also has infinite strength in human, spiritual, angel, deity, and creator class terms. When possessing a human vessel, Michael can dramatically increase the strength threshold of his host, endowing them with astronomically incalculable strength.

Michael can generate an overwhelming white light that is capable of obliterating anything from other living things to entire cities and buildings. With this power, he can destroy a large part of the Earth.

Michael, like all archangels, is able to release divine light from his vessel. This ability also allows him to kill and exorcise demons by placing his hand upon their forehead. And he has the ability to purify the souls of those affected by demons.

Michael can spread his wings out and can instantly take flight.

Michael, like all celestial beings, requires a human vessel in order to physically interact with humans on Earth, as it is a law that applies to all angelic beings.

Dreamwalking: Michael, like all angels, can enter the dreams and minds of humans.

Induced Sedation: Michael, like all angels, can cause humans to fall to the ground unconscious just by touching their forehead.

Regeneration - If his vessel becomes damaged in any way, he is able to heal it instantly and completely. For instance, his vessel Adam was set ablaze by Holy Fire, but upon his return minutes later, he didn't have a scratch either on his skin or even his clothing.

Apporting - Michael could send angels back to Heaven with a simple snap of his fingers, as he did with the angel Uriel.

Superhuman Stamina - As an Archangel, Michael's stamina is incalculable and, even when in a vessel, needs nothing to maintain strength, to strive or operate, as he is self-sufficient.

Weather Manipulation - Michael's control over the weather exceeds even his own brothers. Upon arriving on Earth to John Winchester, he caused sudden severe winds.

Chronokinesis - Michael has complete control over time. He sent Sam and Dean from the past to the present with ease.

Telekinesis - Michael is a powerful telekinetic, able to move and control objects with his mind effortlessly; he was even able to move objects in areas where he hadn't fully arrived in. He demonstrated this when he closed and locked the door to the beautiful room when Adam tried to escape it.

Healing - Michael can easily heal others of any injury, wound, and disease.

Resurrection: Michael, like all archangels, can easily revive dead people.

Teleportation: Michael, like all celestial beings, can vanish and reappear anywhere in time, space, and any place on the face of the Earth.

Pyrokinesis: Michael can ignite any object or thing by touch.

Thermokinesis - He made the doorknob to the beautiful room extremely hot to prevent Dean from being able to open it and save Adam.

Supernatural Perception - Michael can sense and see things even if they're naturally invisible.

Terrakinesis - Michael is able to cause powerful earthquakes by thought or presence alone.

Disintegration: Michael was able to disintegrate two angels with a stare

Reality Alteration: Michael's demuirgic power allows him to create anything from nothing, although he needs Lucifer's power to shape it. It was stated that he could have ended the war in Heaven with a gesture.

Invulnerability: Michael, like all archangels, is resistant to any form of harm whatsoever, and can't even be harmed by other beings, unless something angelic is involved, or if he is fighting another archangel.

Immunity - Michael was resilient to Holy Fire, although he still found it agonizing, damaging and being able to banish him; but unlike other angels, it couldn't kill him.

Healing Factor: When Michael's vessel does get damaged by something angelic, he can heal the wound(s) instantly.

Teleportation: Michael, like all celestial beings, can vanish and reappear anywhere in time, space, and any place on the face of the Earth.

Like his brothers, Michael has a deep understanding of many things, due to him being older than the universe itself. Michael's knowledge exceeds that of all his archangelic siblings, including Lucifer.

Michael is able to read the emotions of humans.

Michael can erase, restore, alter and fabricate the memories and perception of a human.

Michael can see into the future, but not the full picture.

Michael has the ability to communicate using his minds and read the minds of others.