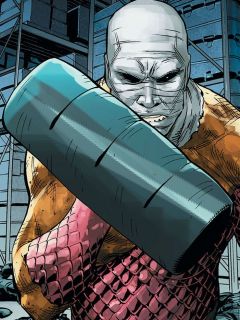 In Ancient Egypt, the reign of Ramses II, the priest Ahk-ton discovered a fallen meteor, from which he crafted the Orb of Ra. He sends it into the future, calculating for its return as a powerful weapon against the king. When Batman and the Outsiders arrive from the future, Ahk-ton used the Orb to enslave Metamorpho. Once Metamorpho was freed, Ahk-ton was defeated and taken by Ramses, who intended to slay Ahk-ton. Apparently this execution was stayed. Ahk-ton soon resurfaced. This time, he himself had been transformed by exposure to the metor into "the Metamorph."

Vandar Adg (Vandal Savage) used the Orb of Ra to enslave Ahk-ton and war against the prince, Khufu. This transformation was later reversed, and Ahk-ton slain and buried along with the artifacts.

Millennia later, Rex Mason, a soldier for hire, was contracted by Simon Stagg to find the Orb of Ra. When he found it, his cohort, Java, stole it and left Rex in the light of an ancient meteor. This meteor transformed Mason into Metamorpho, the Element Man. Soon after, he sought the Justice League's help in restoring him to normal. This failed, and Rex also rejected the JLA's offer of membership. He teamed on other time during the "Silver Age" of heroes when Deadman coerced a group of heroes to form a task force against Agamemno and the Injustice League.

Rex continued his adventuring solo, until the day when Batman's associate, Lucius Fox, was kidnapped in Markovia by Baron Bedlam. At just that time, Metamorpho had been seeking a cure from Markovian scientist, Dr. Helga Jace. Metamorpho aided in overthrowing Bedlam and decided to stay on with this new group of heroes, whose name he coined: the Outsiders.

It seemed that Dr. Jace was on her way to discovering a way to cure Rex. She helped him gain access to his girlfriend, Sapphire Stagg. The reunion was brief as her jealous father, Simon killed Rex using the Orb of Ra. Dr. Jace proclaimed him dead, but admitted, Rex's physiology was no longer human. To restore him, the Outsiders decided to return to Egypt, in search of the meteor of Ahk-ton. There they were transported back in time to 1200 B.C. Metamorpho was again exposed to the ancient meteor and restored. (Though he would discover that this second exposure meant he could never reverse the process). He came briefly under Ahk-ton's control before the Outsiders could stop him and capture Ahk-ton. Upon their return to the 20th century, Sapphire Stagg proposed marriage to Rex, which he wholeheartedly accepted.

Later, the Outsiders foiled an assassination attempt on Simon Stagg. Afterwards, Stagg relented and gave his blessing to the wedding of Metamorpho to his daughter. As Rex and Sapphire readied for their wedding, his former foe, Maxwell Tremayne, sent his shape-changing lackey, Even Steven to kidnap Sapphire. Even Steven betrayed Tremayne and killing the both of them. After the wedding, they happy couple decided to try to find a way to conceive a baby.

Hopes for children were dashed after much physical examination. And so, Rex agreed to undergo an experiment which would infuse him with new DNA. Unfortunately, while Dr. Jace began this treatment, the Manhunters activated all their sleeper agents on Earth — including Jace! Jace captured the Outsiders and took control over Metamorpho. Sadly, before Jace could be stopped, she destroyed Metamorpho and herself.

Metamorpho lay dormant (and was believed dead) for quite some time. Finally, he was reconstituted by the Dominators' gene bomb. Soon thereafter, he resumed his heroing career as a charter member of Justice League Europe. He suffered temporary amnesia, and forgot about his family, who eventually sought him out. To his surprise, he now had an infant son — Joey! By then, Sapphire had been pressured into marrying Java and Rex could not cope with that betrayal. He and Sapph went separate ways. During his time with Justice League Europe, he met and fell in love with Vivian d'Aramis (the Crimson Fox). Though Vivian returned his feelings, she was torn when her former husband, Rene, returned from the dead. She chose to go with Rene and the two of them faked their deaths (again).

It seemed tragedy would ever follow the Element Man, as his son, too was cursed by the meteor of Ahk-ton. Unless contained, the boy would randomly transform the elements around him. For everyone's safety, Rex agreed to place the boy in Simon Stagg's care. Once done, Stagg forbade Rex from ever seeing Sapphire or Joey. For his son's safety, Rex abided this until he met a woman named Jillian Conway. She had also been transformed by the meteor. She convinced Rex that she knew a way to cure them of their metamophosis. Rex hoped that this miracle would work for his son, too, and he stole Joey away from Simon Stagg. Before it was too late, Rex discovered that Conway had misread the heiroglyphics; when she attempted to reverse the process on herself, she was instead destroyed. In the confusion, Joey had escaped and found his way to the the meteor. Since the meteor transforms those who touch it, and Joey transforms the things he touches, both canceled each other out. Joey was cured of his condition, and the meteor was rendered inert.

Rex and Sapphire were once again estranged and he mutated further, into more a rock-like form. During this time, he was drawn to Vivian D'Aramis, the Crimson Fox. This relationship was cut short when Vivian was kidnapped and ultimately killed.

He has twice reunited with the Outsiders: once in Paris, and again at Geo-Force's wedding.

Tragedy struck again when Metamorpho shielded his fellow Leaguers upon reentry from space. He was is rendered "inert," and was interred in Valhalla, the graveyard of heroes. There he lay, but not peacefully. When the sixth-dimensional being called the "Id," was loosed on Earth, it granted everyone's desires. Young Joey Mason wished for his father's "return"; the dead hero was not, however, brought back "to life." After the Id's defeat, Rex's strained form was returned to its grave.

Apparently, Rex's spirit remained alive and he knew that he could be restored using the Orb of Ra. He finally succeeded in contacting Sapphire Stagg and she used it to restore him at last. He was soon back into the swing of things. Thayer Jost recruited him to join a short-lived, rival Doom Patrol.

The whole Metamorpho clan was involved in an explosion which altered their identities. Simon, Sapphire and Joey were all merged into a single energy being. Rex himself took on the form of the late Java. The resulting amnesia let the former into a blind rage and up against Black Canary. Canary ultimately guessed what had happened and helped them regain their individual selves. Apparently, Rex subconsciously chose the form of Java because of jealousy; where Rex could never succeed, Java had been like a son to Simon Stagg. Stagg was rejuvenated by the affair and suggested they begin their adventuring anew.

Meanwhile, a second Metamorpho appeared. This person possessed most of Rex's memories, but suffered a measure of amnesia. This person accepted Arsenal's proposal to join the new Outsiders. The real Rex soon learned of his duplicates activities and went to reassimilate him.

He revealed to the Outsiders that he had fallen to Earth protecting the JLA, his body dispersed into many pieces. Though most pieces were recollected, one fragment reformed itself into its own separate consciousness. Understandably, this new Metamorpho had limited memory of its past and he eventually came under the wing of S.T.A.R. Labs in California and joined the Outsiders

The Outsiders were not so quick to allow Rex to destroy their teammate and in the end, Rex decided that this new version of himself was indeed a unique sentient being. He was allowed to continue his life with the Outsiders and choose a name for himself: Shift (he decided not to take an alter ego).

This "second" Metamorpho went by the name "Shift" and developed a relationship with Indigo. After the events of One Year Later, Shift willingly chose to be reassimilated into Metamorpho, after killing several people. Rex has stepped in to fill Shift's position in the Outsiders, while a full account of Shift's crimes is pending.

Rex has recently mentioned that his parents died in a car accident just before he attended college.
Superhero Class