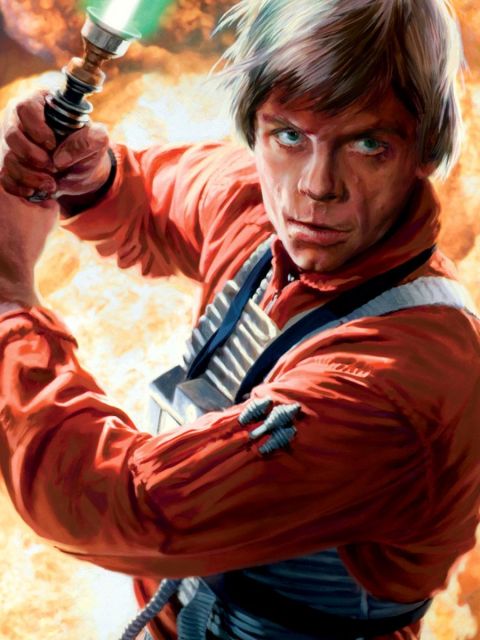 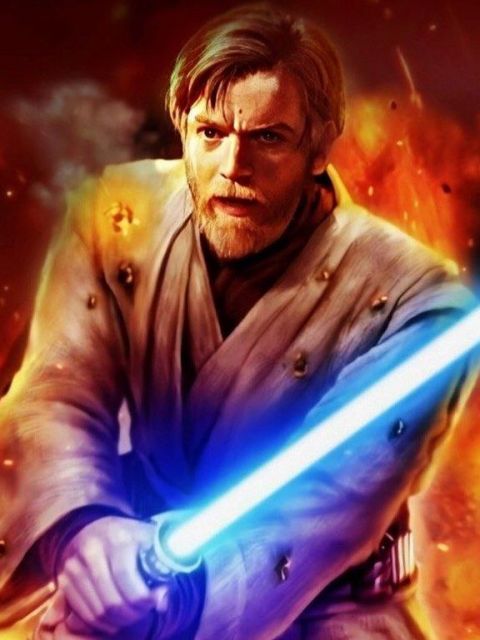 Obi-Wan Kenobi It shouldn't even be half. Obi-Wan should take this with ease.

Obi-Wan Kenobi In canon, Luke is not that strong compared to Jedi masters from the past who have spent their entire life mastering the force and certain fighting styles. I.e., Yoda, Obi-Wan, Kit Fisto, Plo Koon, etc.

Obi-Wan Kenobi If you want to a legends luke, make one.

Obi-Wan Kenobi People, can we all agree that this canon Luke, not legends.

Luke Skywalker Irrelevant, and Kenobi wasn't doing that against RotS Vader. Kenobi's best feat pales in comparison to that of Luke's.

Luke Skywalker RotS Vader >>> Grievous, so I don't know why you're trying to use the inferior feat.

Luke Skywalker Still using an irrelevant feat. And no, Kenobi didn't match The Chosen One, he matched RotS Vader (which is honestly PIS, as Vader proved earlier in RotS that he should obliterate Kenobi in the Force). And as for your second point, RotS Kenobi:
1. Doesn't know who Luke is.
2. Doesn't know Luke has a cybernetic limb.
3. Doesn't know which limb is the cybernetic if he even did know.

Luke Skywalker Hey child, you don't tell someone to concede until you've actually proven something. You know what you've proven? NOTHING. You've brought absolutely nothing except for your own bias and inability to accept facts.

Luke Skywalker "now admit that Anakin is above Luke in almost every way" Quoted from you, that's telling me to concede.

Luke Skywalker Clearly not very much, considering the fact that Vader could not immediately turn the fight in his favor. He certainly wasn't only using 45%, and even if he was, Luke would still be superior to Kenobi.

Luke Skywalker Irrelevant, because if Vader wasn't trying, as you're so adamantly claiming, he could have easily overpowered Luke without killing him. But since he was unable to do so, it is very clear that Luke is relative to him and on the same tier of power.

Luke Skywalker "wouldn't mean life or death"
> Luke smacking him with a blazing hot plasma-Force blade at full strength
> The hell do you mean it's not life or death, it was entirely possible for Vader to die there. Now where's the proof of Vader being unable to prevent that due to conflict?

Luke Skywalker Still not seeing proof of Vader not being able to stop that simply because of conflict.

Luke Skywalker When you actually give proof to back up your claim. Because I've still seen nothing to support what you've been saying, and the feats say that Luke is on the same tier of power as Vader and above Kenobi.

Obi-Wan Kenobi @LordTracer: Kenobi scared Dooku during there fight in RotS which is stated in the novel which is why he used the Force on him. Also in that same novel, Palpatine tells Dooku to "test" Anakin and only Anakin meaning he had to get Kenobi out of the picture, note that Dooku only used the Force on Kenobi and only Kenobi, imagine if he did the same to Anakin. Dooku has went toe to toe with Yoda leaving him exhausted both times twice proving he is a little more than 80 precent of Palpatine (a statment I've personally debunked in the past) and roughly within the same tier as Vader with his fair share of advantages over the slow lord. Kenobi > Dooku as a duelist which is evident because Dooku feared Kenobi's skill as stated in the novel so yes he is equal to RotS Anakin.

Luke's Vader fight is so contextual it's almost unusable.

Luke's contextual advantages:
1: the Force was literally on his side willing him to win as stated in the RotJ novel.
2: Luke was Vader's son and because of that Vader couldn't bring himself to hurt him.
3: there was a full year between ESB and RotJ in which Luke did nothing else but meditate, self train, prefect everything Kenobi and Yoda had told him, as well as prepare for a rematch with the Dark Lord with counters to his fighting style as well as press his own advantages. If we assume he trained for 16 hours a day like he did with Yoda then he would have trained for 5840 hours (yes I did the math) at LEAST, and there was likely a bit more time (like a few weeks or months) between the two movies meaning Luke could have had more time to prep. This makes sense because of the article in Fightsaber which states the fallowing and I quote her " an observing Jedi Master will be astonished by Luke's instantaneous ability to adapt." This means if Luke were to come up against someone who's fighting style was nothing like the slow but powerful straightforward Vader then Luke would struggle a lot more and would likely lose even if that duelist isn't nearly as skilled or powerful as Vader. Luke ain't a good warrior, he's just a weapon designed to fight Vader and only Vader (this was literally stated in the Courtship of Princess Leia). Because of this, Luke knew Vader's fighting style while Vader himself has never seen anything quite like Luke's style.

1: Vader was heavily conflicted which means he couldn't focus properly and hindered his ability to use the Force through emotion which is essential to being a Sith or a Jedi. Which weakens him even more.
2: because of Vader's conflict, he held way back which is stated in Star Wars Fact Files 17 where it's said he didn't want to hurt his son merely force him into submission and make him turn to the Dark Side however he also didn't want that because he was conflicted and didn't really know what he wanted.
3: while Luke had done nothing else but prepare, Vader on the other hand had no reason to prepare since he prior bodied Luke forcing him to flee for his life and wasn't expecting his son to have much improvement which is said in the RotJ novel.

Despite all this, Vader still disarmed Luke of his lightsaber and forced him to hide making him far superior to Luke even in this unfair context which means if the fight was truly 50/50, Vader would have effortlessly destroyed Luke even quicker than Kenobi destroyed Maul in Rebels or quicker than Anakin killed the younglings during Order 66.

"bUt wHy dId VadEt lOsE tHe fIgHt" you ask. It's because Luke only beat Vader because he was enraged beyond belief because Vader threatened Leia and used the Dark Side to an even greater effect than he otherwise ever could have. This use of the Dark Side caught Vader off guard because his change of tactics, Luke used this to pound on him before he could regain his composure. Even then this all couldn't have happened if Vader had not found out Leia was his daughter seconds prior to the Dark Side amp and was distracted because he realized how much pain he caused her from slaughtering her friends to blowing up her homeworld, which probably caused him to be like this https://youtu.be/GyJNEZPm-pQ which intern allowed Luke to gain that win. If not for all of that again Vader (and also the superior not crippled version) would kill Luke like a youngling with him then saying https://youtu.be/X8PyTo6NyXA because it was all too easy!

See!?!? Luke dosent scale to Vader at ALL! Dooku is comparable to Vader if not superior based on feats and Anakin and Kenobi are both above him as duelists meaning they'll destroy Luke and Vader aswell. *sigh* even Palpatine knew Anakin's superiority to his burnt self as stated in Dark Empire. AotC Anakin would beat Luke bty unless you can prove otherwise
Last edited: 7 mo 28 d ago.