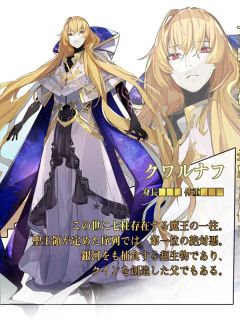 He was powerful enough to kill off all but 30 of the Yazata, and devoured countless stars and planets over his life. In total devouring over 500 galaxies. Thus he is the most feared of the Demon Kings, for his kill count far surpassed that of any other King.

Part of his strength comes from his immortality, for he is unable to die as long as his Star Cluster remains. Making killing him nigh-impossible.

As a Dregvant he is able to impose his will upon the World through the Power of Ego, warping reality to his whims and ways. His is nigh-unmatched through all of Ahura Mazda, only rivaled by Nadare and Bahlavan. For they were the only beings who were able to hold their own in a fight against him.

He is capable of intergalactic travel, moving countless times the speed of light, and if he so desires he can use his Authority as a Star Spirit to instantly teleport anywhere he desires.

Simply looking upon his visage is enough to induce madness, unable to be truly defined in any way, said to resemble a Hadou emanating all phenomena. For he had the ability to become a Hadou God, which he has lost due to forgetting his past.

Pushpaka Ratha (プシュパカ・ラタ, Pushupaka rata) is Khvarenah's Commandment, in exchange for the binding of "having no choice but to continue giving birth to things that will become weapons", he gets "Becoming an atrocious, mighty incarnation of destruction" as a boon.[4]

It is this that allowed him to constantly continue growing and expanding into a Hypergiant Star, and multiplying Saurva without an end in sight. Making him into a being destined to reduce all to naught.

There is a paradox in this, for the creation of weapons is a denial of the peaceful and beautiful worls be craved. Thus the more he adhered to this Commandment, the more he strayed from his original form and purpose.[5]

Visvakarman (ヴィシュヴァカルマン, Vu~ishuvu~akaruman), is his Authority, while this relates directly to his ability to create powerful artifacts, he has forgotten what its details are, and thus he doesn't have full control over it. He simply takes the matter of all he consumes and transforms it into devices capable of impossible things. Even able to bypass Shinga's Law.

Upon awakening more to it before his battle against Magsarion, he was able to call upon it and create a separate space made up of the Everyone that he has consumed, spanning hundreds of galaxies in scope. In here he displayed a vastly greater degree of power, and was capable of producing supergravity thousands of times more potent than Spenta Mainyu (neutron star), and powerful enough to shatter light itself and condenses entire star, and Magsarion with it, to a speck of dust no bigger than tip of a nail, before converging it further to the nothingness. He then reverses vector of that power producing explosion similar to the Big Crunch.

Lokapāla Viśvakarman Vāstu (ロキャパラー・ヴィシュヴァカルマン・ヴァーストゥ, Lokapala Vu~ishuvu~akaruman vu~āsuto~u) Hadou Law, though it is only a False Emanation, unable to reach its full potency due to him being corrupted by the Divine Sword and forgetting of his past and his purpose. And he would be unable to ever reach a true emanation due to his taint.

It is to create a world of "beauty", where all things hold the spark of creativity and the ability to become an ultimate artist. Where all things are of utmost perfection and beauty. Where even conflict is made a nonexistent concept, for all beings exist in a state of prosperity, working together to achieve further and more complete beauty.

It was this beauty that the Asura strived for, the salvation they so deeply yearned.

He called upon it in his fight against Magsarion, and was able to birth a land that allowed no impurity, where all stars of the galaxy are filled with trails of light and billions of structure are created with hundred towers expanding to the end of Nayuta (那由他), beautiful city adorned with monuments and castles and covered by lapis lazuli. There’s no place for any impurity and violence within this realm.

It is said that, even if imperfect, awakening to it made him increase in strength a millionfold.