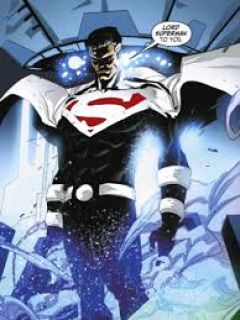 In a parallel universe, Superman was a member of the Justice Lords

Fall of a Hero

For much of his life, Justice Lord Superman's background matched his Justice League counterpart (coming to Earth as a baby after the destruction of his homeworld of Krypton, became a champion of freedom and justice, and teamed up with six other heroes to better combat the forces of evil) until President Lex Luthor executed the Flash. Soon after, Superman stormed the White House. While his comrades battled the Secret Service, Superman confronted President Luthor in the Oval Office. Despite Superman's accusations of corruption and abuse of power, President Luthor refused to surrender and arrogantly stated that he would find a way to avoid prosecution. Grinning madly, President Luthor also called Superman his "greatest accomplice" for perpetuating a chase between the two that never ended; Superman never had the stomach to actually finish off his foes because he loved being a hero and the glory that came with it. Deeply affected by the President's words, Superman declared that if being a "hero" meant that the feuding and fighting had to continue, then he was done with it. Superman then used his heat vision, executing the President on the spot. Wonder Woman and Batman ran into the Office to see what he had done, and when asked how he felt, all Superman had to say with a smile was, "I'm great"

After President Luthor's assassination, the Justice Lords spent the next two years imposing their brand of "peace" on Earth through a harsh rule. Justice Lord Superman himself continued to use his heat vision to lobotomize all of Earth's criminals and super-villains. As a result, all of them became harmless, walking vegetables who obediently inhabited the world's prisons, such as Gotham City's Arkham Asylum Despite Lord Superman's fervent belief that their actions were necessary, many people on Earth chafed under their "guardianship". With the suppression of free press and the world's governments, Lord Superman often endured futile pleas from the current President and railing attacks from former Daily Planet reporter Lois Lane. Lord Superman's constant assurances that the Lords' authority over Earth was only temporary did nothing to reassure his detractors.

Two years after the global takeover of Justice Lords, Justice Lord Batman unveiled his interdimensional transport device, which could be used to view and enter other dimensions. The Lords' first use of the machine showed them a parallel universe where their Justice League counterparts still had the Flash as a member, continued to battle Lex Luthor, and never took control of Earth. With crime virtually eliminated on their Earth, Justice Lord Superman believed that they should spread their brand of justice to the League's world. The Lords had Justice Lord J'onn J'onzz trick and capture the League before taking their places in the League's universe, though Lord Batman stayed behind to keep order. Shortly after their arrival in the League's universe, the Lords found themselves confronted with a rampaging Doomsday. When Doomsday appeared to have defeated all of the Lords, Lord Superman used his heat vision to lobotomize him, much to the shock of that universe's Lois Lane, though plenty of the onlookers felt it was "about time" the League took a more aggressive approach

Soon after, the Justice Lords occupied the Justice League's Watchtower and were informed that Lex Luthor had escaped from prison. Justice Lord Superman was set to kill Luthor as he had killed the President, despite Justice Lord Hawkgirl's counseling him that the League's universe was not yet ready for such drastic action on their part. When the Lords arrived at the prison, however, they discovered that the escape was actually a trap set by the League having escaped the Lords' reality with the help of a repentant Lord Batman.

Lord Superman found himself battling the Flash holding very well for most of the fight. However, Lord Superman soon gained the upper hand. Although he hesitated briefly, he was still willing to kill Flash. Before he could do so, he was interrupted by Superman and Luthor using an energy disruptor on the Justice Lord, draining him of his abilities. When his Justice League counterpart revealed that Luthor's help had been given in exchange for a full presidential pardon, Lord Superman warned that everything Luthor did from that point on was on the other Kryptonian's hands. Superman admitted that it was a high price, but it was better than the alternative. Lord Superman and the other Justice Lords were soon after returning to their own reality.

Justice Lord Superman's actions plagued many others in the years to come, serving as a constant reminder of what could happen if his counterpart ever went too far

During the Cadmus Crisis, the fusion of Lex Luthor and Brainiac created an android replica of Justice Lord Superman to combat Superman
Superhero Class