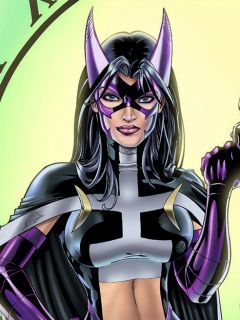 Maria Panessa Bertinelli, wife of Franco Bertinelli of the Mafia family in Gotham City, was the subject of frequent beatings from her husband, though he was sure never to beat her face. Maria decided to have an affair with a man named Santo Cassamento. As a result, Maria became pregnant, with her husband knowing it was not his own child and still beat Maria. Maria gave birth to a girl whom she named Helena Rosa. For eight years, Helena grew up in a mafia household, never suspecting the criminal dealings that took place there.

When Helena was eight years old, a man barged in to the Bertinelli household during dinner and shot Franco, Maria and Pino Bertinelli, sparing Helena. The hit came from Mandragora who wished for no vendettas against him. Helena's biological father passed the order along with a modification that "the sister" be spared. Santo was referring to Maria. But the gunman confused Maria with Helena and so Helena was spared, though she was not supposed to be.

Helena was placed under the care of her Uncle Tomasso's nephew, Salvatore Asaro. She was taken back to the old country, Sicily, where she would be kept safe and where the family was still strong. When arriving, she was terrified. Helena remained there for a number of years. Watching her cousin and uncle train and practice with weapons and hand-to-hand combat. However, the nightmares stayed with her. One night, her cousin showed her that only she could stop the nightmare by putting an end to those who murdered her family: blood cries for blood. When taken into the barn, she asked her cousin to teach her how, picking up a crossbow on the wall. She trained until the age of fifteen when she was sent to a boarding school in Switzerland to protect her from the Italian authorities who were cracking down on the Mafia.

When reading and seeing what was happening, she realized that everything she had been told was a lie about the Mafia. She realized that the Mafia was a force of corruption and evil and for a hundred years, it had been headed by her own family in Gotham City. At age sixteen, she finally returned to Gotham City to spend Christmas with her uncle. However, she hated everyone there. During the party, Helena witnessed her family finally frightened of something. Batman had crashed the party and fought with them. Helena realized that she could fight them too.

Helena returned to Switzerland for school where she plotted her vengeance. She went to her old house in Sicily (which had since been abandoned as a result of her uncle and cousin being arrested), and took a crossbow and a number of items for her crusade. Enrolling at the university in Palermo, she learned all about the Mafia. She constructed her costume and a number of weapons. She thought herself as a nun, totally devoted to her quest. She returned to Gotham in pursuit of vengeance as the Huntress.

Huntress ended the lives of Mandragora and the assassin who murdered her family. Sometime later, Nightwing and she began a brief romantic relationship while working together on a murder case of a police officer with connections to the Mafia.

During the "No Man's Land" Declaration in Gotham City, she briefly donned the guise of Batgirl to better inspire fear into the criminals of Gotham City, though she would also work in the guise of Huntress. She began the habit of marking territories in No Man's Land, all of which would be adopted by the criminals and GCPD. Though Batman knew the entire time that it was Huntress under the cape and cowl, he eventually ordered her to give it up. Batman would give Huntress' Batgirl outfit to Cassandra Cain. Helena continued to be Huntress in No Man's Land, allying herself with a renegade police officer to the point where she assisted in capturing Nightwing and Oracle (though in the end, she helped them escape). On New Year's Eve, the final day of No Mans Land, the Joker attacked her. Joker shot the Huntress five times that night. She survived the encounter and fully recovered, earning Batman's respect.

To curve Helenas violent attitude, Batman nominated her for a position in the Justice League. However, Batman revoked her membership when she was about to kill Prometheus. After a series of murders which seemingly pointed to her as the killer, Huntress became wanted by Batman and Nightwing. Fortunately for her, she tumbled into the bay where she was picked up and rescued by the Question. She was taken to Canada where she was trained by the Question's sensei for three months. The two then traveled back to Gotham where she shared the story of her becoming the Huntress. The time Question and Huntress spent together sparked a relationship. However, when Huntress discovered who had been framing her, she discovered more then she bargained for. She discovered her true father as being Santo Cassamento and he was responsible for the death of her family. As a result, Helena asked a favor of her Uncle Tomasso. Santo was lured to the docks and was killed by Tomasso's men. The Question did not approve of what Helena had asked, and inquired when the killing would stop. He left her as she threw her golden cross into the water.

Batman funded her for a new uniform and a new bike would later return the favor by saving his life when he took a fall in Crime Alley by fighting off attackers and putting him into the Batmobile, something she would later remark he'd never thank her for. The Scarecrow, working with the mysterious Hush, drugged her, and manipulated Helena into attacking Catwoman, which she perceived as her old self. With the aid of Batman, the Scarecrow's drugs wore off and Helena made a full recovery. The Huntress soon found herself soon allied with Oracle and Black Canary and continues to fight crime in both Gotham City and Metropolis as an official member of the Birds of Prey.

While still being on the Birds of Prey, Huntress served with the Outsiders when Arsenal was shot five times in the chest and was put out of the line of duty for three months where she was at constant odds with Nightwing, despite their past relationship. Immediately after Arsenal was able to serve again, Huntress left the Outsiders.

One year after the events of Infinite Crisis, Huntress became its field leader with Black Canarys departure from the Birds of Prey and her replacement heroines including Big Barda and Manhunter. During this time, Huntress redesigned her costume to fully cover her body.
Superhero Class