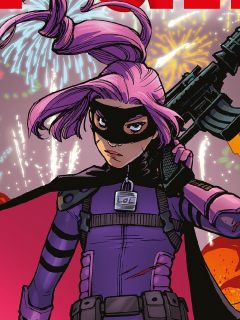 Hit-Girl (she has not yet been called by another name) was raised by her father, Big Daddy, her mother being murdered by frustrated criminals. For an unnamed amount of time, Big Daddy has been training Hit-Girl to kill, allowing her to fight along side him to avenge his wife's death by killing many criminals, ending with boss-man Johnny G. As a result of this, she has a high knowledge and interest of weapons. Also she has a taste for comic books, and apparently Hello Kitty. It is revealed in her diary that, because of their business, Hit-Girl and her father move constantly, record time being six weeks.

Hit-Girl has been trained thoroughly by her father. She has been trained to take a bullet (with a bullet-proof-vest on, of course), fight hand-to-hand, fight with both blunt and bladed weapons, and she has been taught about guns, inventors of guns, and even action movies and action movie stars. This is presumed to exist only for comic purposes, because she has not yet been seen using guns. The nature of Hit-Girl's training has made her particularly brutal in combat.

Although the advantage of costumes and nicknames are obvious, it appears that most of all of it is influenced heavily by Hit-Girl and her love of comics. It is even shown that the only reason Big Daddy agrees to join forces with Kick-Ass and The Red Mist is to entertain his daughter.