Created by jongensoden, 3 mo 4 d ago.

Black Racer is no where near the top spot. Shazam is faster than a few as well.

Mxyzptlk 1 mo 24 d
Top 10 fastest superheroes #
Whom ? Gl has Superman higest record speed is too much

Superman couldn't catch the Flash so asked Shazam to do so.

I don't think they're faster than the Runner

How is that a joke? Thor is extremely fast.
Mr
MrZia12 2 mo 29 d
Top 10 fastest superheroes #
wonder woman is best super hero.
she is true hero.
she is funtastic.

Clint_Barton 3 mo 1 d
Top 10 fastest superheroes #
I am not reading DC, not gonna include DC characters to my list.
▪1. Odin/Zeus/Bor/Galan/Celestials/ Abstracts/Thanos: Abstracts of Marvel (including Odin and Bor) exist across every plane of reality, therefore speed is kind of "absurd" for them high-hyperversal beings. Thanos scales to Odin.
▪2. High-herald tiers: Thor, Hulk, Blue Marvel and etc, those who can move on immeasurable speed.
show 1 reply
Th
TheOneBetweenAll 2 mo 28 d
Top 10 fastest superheroes #
So you are not reading DC, but in the other Wonder Woman vs Thor battle claimed he would be faster than her and made several other statements about her?
It's always great to see if people make up their on ****, instead of going by the facts...

Atomic_lantern 3 mo 1 d
Top 10 fastest superheroes #
1.Black Racer (was able to tag Wally West while weakened)
2.Godspeed (Channeled all the speed of the speed force)
3.Superboy-Prime(Was able to outrun Wally West and had to make Wally absorb all the speed force within 2 other speed force users)
4.Wally west(has irrelevant speed)
5.Black flash (shown to be faster than reverse flash and Barry Allen)
6.Barry Allen (shown to have irrelevant speed)
7.The runner (was able to speed blitz the silver surfer and thanos)
8.Silver surfer(was able to cross the universe within a second and disorted space and time with his speed before)
9.Superman(crosses the universe in a second)
10.Thor(has transcended space and time with his speed and is comparable to the silver surfer)
Last edited: 3 mo 1 d ago.
show 6 replies

It makes no sense because the Black Racer is far from the fastest being. It's never been stated that he's close. Also it's possible that Black racer and Black Flash are the same beings as said by Wally West
Last edited: 3 mo 1 d ago.

This has never been stated or shown to be the case. The Black Racer rarely catches the people he's chasing.

Breaker 3 mo 3 d
Top 10 fastest superheroes #
people forgetting how the hulk proved that he is faster than mjolnir....
show 5 replies

Most of the people here wouldn't be able to catch Hulk off guard because he has the best reaction time in comics but I believe this is about who can run faster not react faster.
Last edited: 3 mo 3 d ago.

Breaker 3 mo 3 d
Top 10 fastest superheroes #
hulk didn't react to the hammer he race with it . 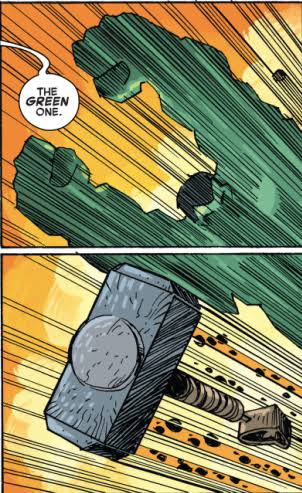 I keep underestimating the Hulk. Never doubt the strongest one there is.

0. Black racer (he only was out ran by Wally west because he was weakened and Barry way fighting his way out of him, before that he managed to tag Wally, and after Barry left him he basically out ran them both, fast)
1. Godspeed pre defeat (has the speed of the entire speed force within him, the only one that can truly be in multiple places at once by his speed)
2. Superboy prime (Wally west required preparation in order to contend with primes speed)
3. Wally west (faster than teleportation, beyond the very concept of speed itself)
4. Hunter Solomon (has been shown faster than the black flash before, and has easily out ran Barry Allen before)
5 Black flash (the flash that killed Barry Allen and has generally faster speed than barry)
6. Barry Allen (the original flash, speed that has been shown beyond the concept of speed itself before)
7. Eobard Thawne (the reverse flash, eventually defeated by Barry, but was there to use equal speed/power to Barry Allen in order to reboot the continuity of DC)
8. Sentry at peak speed (warped reality, time and space itself by simply moving)
9. Superman at peak speed (could travel accross the DC universe which is >20 trillion light years accross in the length of a heartbeat, and could challenge Barry Allen to an extent)
10. Darkseid at peak speed (beyond the concept of speed itself once again, able to keep up with Barry Allen at times, and again like the above, irrelevant speed)

^^^all IRRELEVANT speed, which is beyond the concept of speed itself^^^

Black Racer isn't the fastest. the reason many people struggle is because he never ever stops and will get you eventually. Also you forgot Shazam

The race wasn't that long, he's definitely the fastest

He's not. Wally West and Max Mercury have outrun him before. If the Black Racer was the fastest he would never struggle to catch anyone. Wally shouldn't have had the chance to go to the end of the universe in the first place if he was slower.

@Clint: can I have a scan that says it dose?

Going to the edge of the universe? That's fodder, the black racer has easily out ran Barry and Wally before

The Black Racer's never been able to catch them. He's good but definitely not the best at all

How did Wally stop him? If he's faster he should have caught him straight away. He's not that fast, he just has unlimited stamina

Black racer is not that fast okay buddy hold up there, when he got weakened is when he lost to Wally west he still managed to outrun them both and tag Wally, stop denying that

How was he weakened? He's the Avatar of Death. He's not just some guy. Wally was in the lead by a good distance but Wally can't run forever. BR can, that's how he catches them. Don't get them confused
Last edited: 3 mo 1 d ago.

@EmptyHand: do you realize all the context involved with Wally outrunning instant teleportation? How has Barry shown immeasurable speed? And Barry ain't the first Flash, that's Jay Gerrik.
Last edited: 3 mo 1 d ago.

DevyEZ 3 mo 1 d
Top 10 fastest superheroes #
Wasn't Wally heavily amped by everyone on Earth and that dude who looked like Sonic (can't remember his name)?

@DevyEZ: he was also amped by the physical form of his imaginary friend (I can't remember his name) who was just as fast as he was and the sources of his power aswell.

Surfer is not Faster then flash

But flash is Faster

Both Barry and Wally are faster than Silver Surfer

They are way Faster it's not even close

Silver Surfer isn't slow but he isn't faster than the Flash
Th
TheOneBetweenAll 2 mo 28 d
Top 10 fastest superheroes #
Shazam and Wonder Woman use both the same speed in Post Crisis, so why is Billy that high ranked?

Jay Garrick is fast, just I think a little slower than Thor. Black Racer is neutral (not good not bad). I did heroes.

Shazam is faster than Superman

They are really close in speed. Sentry, Superman, and Shazam are about even in speed.

I swapped Quicksilver but Superman is not faster than Shazam. Jay Garrick's good but he's not that amazing

Black Racer is fast but he hasn't been shown to be incredible fast. Wally and Max Mercury have outraced him before. The greatest thing Black Racer has is that he'll never ever stop. He will get you sooner or later it's just a matter of time.

@EmptyHand You have something to say?