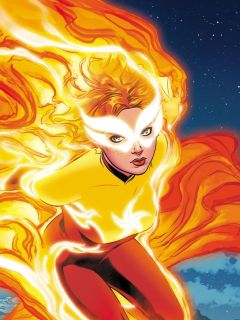 Angelica Jones was a thirteen-year-old high school student who fell victim to a series of misfortunes. She was badly treated by other girls at her school, her beloved grandmother died suddenly, and Angelica was frightened to discover that she herself was manifesting a strange superhuman power to generate great heat. With her grandmother gone, Angelica lived alone with her father, who was unable to cope with helping Angelica deal with her new power. Angelica was desperately confused, lonely, and miserable.

Angelica was in fact a mutant, and her newly emerging mutant ability caused her presence to be detected by Cerebro, a machine designed by Professor Charles Xavier, founder of the X-Men, for the purpose of locating superhumanly powerful mutants. Cerebro functions by detecting the unusual waves of psionic energy emitted by all superhumanly powerful mutants. Angelica's presence was also registered by Multivac, a similar machine employed by Emma Frost, the White Queen of the Inner Circle of the Hellfire Club. Xavier and the X-Men attempted to pinpoint the unknown mutant's location in order to recruit her for Xavier's School for Gifted Youngsters, where he trained mutants in using their powers. Meanwhile, Frost did the same, hoping to enlist the unknown mutant in her school, where she could train her to use her powers in order to serve the sinister purposes of the Inner Circle. Frost reached Angelica and her father only moments before the X-Men could. Frost, in her public role as headmistress of the Massachusetts Academy, a renowned private school, persuaded Angelica's father to send her there to receive the special help she needed.

A year later Angelica had made great progress in developing the use of her powers under the White Queen's guidance. Angelica remained an innocent, unaware of the true malevolent nature of the Hellfire Club and the White Queen. Angelica found some happiness at the Massachusetts Academy, and she was very grateful to Frost for the kindness she often showed her. Frost gave Angelica the code name of Firestar.

Thunderbird (James Proudstar), one of the Hellions, a team of adolescent mutants being trained by Frost, sought vengeance on Xavier and the X-Men for the death of his brother, the original Thunderbird (John Proudstar), who had been killed in action while serving with the X-Men. Two other Hellions, Empath and Roulette, decided to help Thunderbird against the X-Men despite his refusal of their assistance. Empath used his power to control the emotions of others to force Firestar to fall in love with him so deeply that she would do anything he asked. He thus forced her to participate in the three Hellions' attack on the X-Men, whom Frost had taught Angelica to regard as enemies, at the military base at Cheyenne Mountain, Colorado. However, the X-Men defeated Firestar, Empath, and Roulette, and Thunderbird realized he was wrong to want vengeance on Xavier and the X-Men.

Firestar, once free of Empath's control, felt despair and guilt over having helped the Hellions cause so much trouble at Cheyenne Mountain. She was pleased and touched, however, when Xavier offered to admit her into his school. She refused, though, out of loyalty to Frost, and returned to the Massachusetts Academy.

Angelica was later contacted by the hero Night Thrasher to join with other teenage super humans to form the New Warriors. She joined with them for a long tenure, gradually developing a romantic relationship with Marvel Boy (later, Justice). After many months, Angelica learned that her powers were slowly causing her to become sterile and she began to use her powers more sparingly and to a lesser extent.

Angelica and Justice were brought to the Avengers by their fellow New Warrior Rage, who was an associate of the hero team. The three helped the Avengers reform after a period of long disbanding, and Angelica and Justice captured the villain Whirlwind (David Cannon) to prove their worth to the team. They were accepted as reserve members under the tutelage of Avenger Hawkeye (Clint Barton), and soon graduated to full membership status. Angelica was initially reticent about her role with the team, but she remained with them out of sympathy for Justice who was enamored of the team. She shared her medical problem with the team and was helped by Dr. Henry Pym who eventually cured her.[citation needed] Angelica felt increasingly a part of the team, and when Speedball tried to get her and Justice to rejoin the Warriors, they declined.

Angelica accepted Justice's proposal, and the two left active Avenger duty to explore their relationship before marriage. Justice later broke off the engagement.

With the Superhuman Registration Act signed into law, Angelica chose to give up being Firestar. She feared the harm that could come to her family if her identity was revealed and worried about how she could be exploited. She chose to focus on her studies. She tossed her mask away in the street.